High-Speed and High-Resolution X-ray Imaging with the Velociprobe

A team of researchers from Argonne National Laboratory has developed a new device for quickly acquiring high-resolution x-ray images over large sample areas. Dubbed the Velociprobe, the new instrument utilizes a technique called “x-ray ptychography.” Installed at the U.S. Department of Energy’s Advanced Photon Source (APS), the Velociprobe recently demonstrated its imaging capabilities in a series of tests. One test demonstrated the device's capability to locate an x-ray beam on a sample to an accuracy of 2 nanometers. Another test involved rapidly scanning an integrated circuit to reveal details with sub-10-nm resolution. Although these are impressive results, the true imaging capabilities of the Velociprobe will be realized with the upcoming APS Upgrade, which will increase the coherent x-ray flux by more than 100 times. This dramatic increase in flux density will allow the Velociprobe to usher in the next generation of fast scanning of materials at high spatial resolution.

X-ray ptychography involves shining a coherent x-ray beam at many closely-spaced points on a sample, producing a collection of x-ray diffraction patterns. Computer algorithms then reconstruct the sample image from the recorded patterns.

Although the principles behind x-ray ptychography are well understood, scientists have invariably encountered difficulties when building practical instruments incorporating the technique. For instance, even slight vibrations or thermal fluctuations can introduce errors in positioning the x-ray beam, which blurs the image. Another limitation involves how the x-ray beam is moved, or scanned, over the sample. X-ray ptychography instruments have traditionally used the step scan approach to obtain the diffraction patterns. In the step scan mode, after one diffraction pattern is recorded the x-ray beam (or the sample itself) is moved a tiny amount, the new position is confirmed, and then another diffraction pattern is produced and recorded. This intermittent procedure means that most of the incoming x-ray photons are wasted.

The Velociprobe was engineered to address many of these limitations while also taking full advantage of the dramatically higher x-ray flux anticipated from the APS Upgrade. The basic design philosophy was to improve upon each aspect of earlier ptychographic instruments in order to achieve faster imaging at higher resolutions. The left side of Fig. 1 depicts the Velociprobe. Both the sample and the optics used to focus the x-ray beam are mounted near the top of the device. The incoming x-ray beam is indicated by the line of arrows. 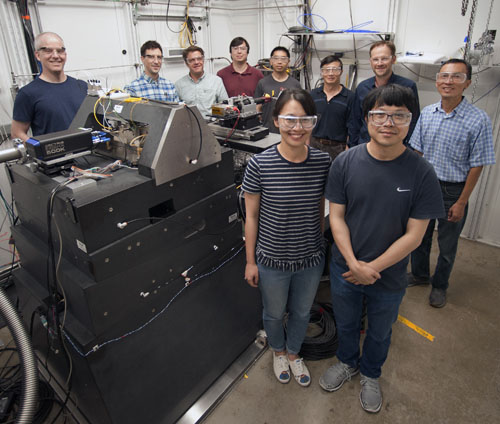 The bulk of the Velociprobe consists of several sizable granite blocks, which together weigh nearly 8,000 pounds (approximately 3,600 kilograms). These massive granite components provide stability and help isolate the sample and optics package from vibrations. Coarse horizontal and vertical movement of the system is accomplished by innovative ultra-stable mechanical drivers mounted between the granite blocks. Air pumped between the smooth granite blocks facilitates movement. When the movement is complete, the air dissipates to form a rigid, granite-on-granite structure.

The sample is held within the sample stage stack, which can be moved independently of the granite blocks. The optics stage stack hangs on the gantry just above the sample stack. The optics stack holds the zone plate (reminiscent of a bullseye) that focuses the x-ray beam onto the sample. Ultra-fine motion of the zone plate is measured via three laser interferometers. These measurements are fed into a sophisticated closed-loop feedback system, which commands sensitive piezoelectric devices. This ultra-precise-and-stable movement system demonstrated a position accuracy of 2 nanometers.

The researchers also used recently-developed techniques to dramatically reduce imaging time. In place of the intermittent step scan procedure, a fly-scan approach was adopted. This technique continuously creates diffraction patterns by directing the x-ray beam to follow a spiral or other pattern across the sample. Such continuous-scanning methods greatly reduce overall imaging time.

Using the advanced fly-scan approach at the X-ray Science Division 2-ID-D beamline at the APS (an Office of Science user facility at Argonne), the Velociprobe produced a series of two-dimensional images from various samples. For instance, a gold test pattern was imaged at a spatial resolution of just under 9 nm. A fast scan was also used to quickly image an integrated circuit, as shown in Fig. 1 (middle panel). The entire scan required only 1.2 seconds.

Further development of the Velociprobe is under way. While the images produced in this study were two-dimensional, an upgrade will permit high-resolution three-dimensional imaging. Additionally, the planned installation of a fluorescence detector will allow the Velociprobe to perform both ptychographic and fluorescence x-ray imaging.  ― Philip Koth

The authors would like to thank Joseph Arko, Bruce Hoster, and the staff of the Argonne Central Shops for their assistance with manufacturing and modifying various components. The Velociprobe was supported by Argonne LDRD 2015-153-N0. This work is partially supported by the Office of the Director of National Intelligence (ODNI), Intelligence Advanced Research Projects Activity (IARPA). This research used resources of the Advanced Photon Source and the Center for Nanoscale Materials, U.S. Department of Energy (DOE) Office of Science User Facilities operated for the DOE Office of Science by Argonne National Laboratory under Contract No. DE-AC02-06CH11357.