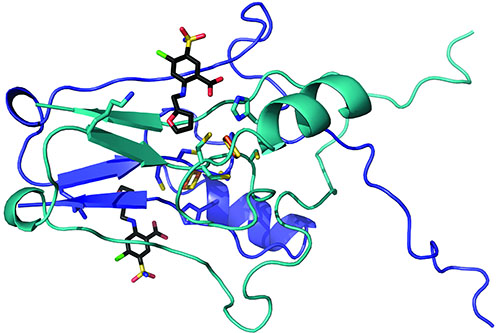 Medications attach to the proteins in our bodies the way spacecrafts dock into the International Space Station. Describing that process in detail can reveal a lot about how the medications work — and what form new medications should take. Using extreme-brightness x-rays from the U.S. Department of Energy’s Advanced Photon Source (APS) at Argonne National Laboratory researchers from West Virginia University (WVU) have mapped the crystal structure of a protein that resides in our cells and determined — for the first time — how a drug latches onto it. The findings appear in Communications Chemistry, a Nature research journal. The goal of the research is improved pharmaceuticals that alter the protein’s activity, bringing relief from detrimental symptoms.

The study — funded by the West Virginia Clinical and Translational Science Institute — centered on a protein called “mitoNEET.” MitoNEET inhabits the outer membrane of our mitochondria, which act like power plants that energize our cells.

“This protein has been implicated in a lot of diseases that are very tough to tackle: things like diabetes, stroke, heart disease,” Robart said. “We don’t actually know what the protein does yet, but it hangs out in proximity to the powerhouse of the cell, and all of these diseases have an energy-flow theme to them.”

To explore the role mitoNEET plays in our energy processes, the researchers isolated mitoNEET from both bacterial overexpression and animal models. Then they synthesized 11 molecules similar to furosemide — a common diuretic sold under the brand name LASIX® — and exposed the mitoNEET to them.

After the molecules bonded to the mitoNEET, the researchers built atom-by-atom maps of the pairings. They sent their samples to the Northeastern Collaborative Access Team (NE-CAT) macromolecular x-ray crystallography facility at the APS and used the NE-CAT web-based remote data collection graphical user interface to control the NE-CAT 24-ID-C beamline, which bombarded the sample with the ultra-bright, high-energy APS x-rays, revealing precisely how the molecules came together (Fig. 1).

The team discovered that the molecules docked into a cluster of iron and sulfur atoms that made up part of the protein. Raisa Nuñez, an undergraduate participating in the WVU Research Apprenticeship Program, collected preliminary structural data. “This highlights that significant scientific discovery can come at any career level,” Robart said.

“These findings are of importance as they allow us to continue to understand the role played by mitochondria and bioenergetics in many disease states,” Hollander said. “The modulation of mitochondrial function through targeted therapeutics may be a critical avenue of drug discovery."

Understanding mitoNEET’s cellular function could improve the performance of drugs that work by altering the protein’s activity. For example, adding an extra oxygen group to a drug’s molecular structure could dramatically tighten its bond to mitoNEET and eliminate unintended binding to other cellular proteins.

The potential upshot for patients who take the drug? Better symptom relief.

“The success of this project really illustrates how approaches that are considered basic science can provide considerable insight into clinical problems,” said Michael Schaller, who chairs the School of Medicine’s Department of Biochemistry. “It also demonstrates the power of tackling problems as teams consisting of members with very different expertise.”

This work was funded in part by a pilot project to W.J.G., T.E.L., and A.R. The project described was supported by the National Institutes of Health (NIH), U54GM104942, LH RO1 CA195727, R01 HL128485, and 1R411NS110070-01. Additional funding was proved by the WVU Stroke CoBRE fund P20 GM109098. This work was also funded in part by the Community Foundation for the Ohio Valley Whipkey Trust. The NE-CAT beamlines are funded by the National Institute of General Medical Sciences from the NIH (P41 GM103403). The Pilatus 6M detector on the 24-ID-C beamline is funded by a NIH-ORIP HEI grant (S10 RR029205). This research used resources of the Advanced Photon Source, a U.S. Department of Energy (DOE) Ofﬁce of Science User Facility operated for the DOE Ofﬁce of Science by Argonne National Laboratory under Contract no. DE-AC02-06CH11357.