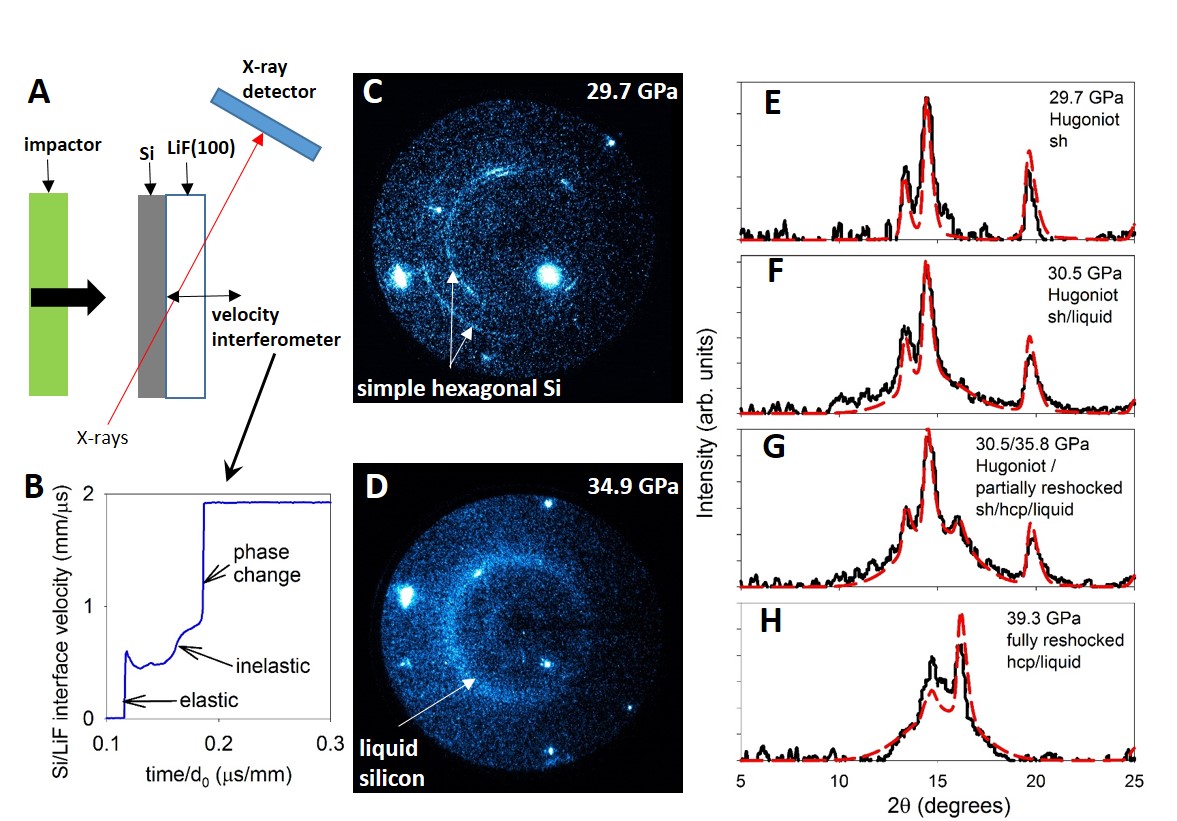 In situ x-ray diffraction (XRD) measurements have played a crucial role in identifying high-pressure structures in shock-induced, solid-solid phase transformations. However, solid-liquid phase transformations have proved to be more challenging, in part because volume changes associated with melting and freezing are often small and XRD patterns from liquids are not easily distinguished from those of amorphous solids. For such reasons, the direct and unequivocal demonstration of shock melting and recrystallization remained important unrealized objectives until researchers from Washington State University used high-brightness x-rays from the U.S. Department of Energy’s Advanced Photon Source (APS) to perform in situ, time-resolved XRD and simultaneous velocity interferometry measurements to examine structural changes in silicon (Si) shock-compressed to 54 GPa. The APS is an Office of Science user facility at Argonne National Laboratory.

The shock-compression experiments were performed at the 35-ID-E beamline of the Dynamic Compression Sector at the APS using the 24-bunch synchrotron mode, which consists of ~100-ps-duration x-ray pulses appearing every 153.4 ns. This arrangement allowed each plate-impact experiment to consist of four powder XRD measurements 153.4-ns apart to resolve the silicon structures upon initial shock compression and after re-shock from the shocked state. Simultaneous laser interferometry measurements recorded the elastic, inelastic, and phase-transformation waves propagating through the shock-compressed Si disks. Shock melting was unambiguously established above ~31–33 GPa shock stress as all sharp crystalline diffraction peaks vanished and were replaced by a single broad diffraction ring corresponding to the melted state. The experimental setup and major findings are depicted in Fig. 1.

The re-shocked states provided further insight into the Si phase diagram near the melt boundary. After re-shock from states on the sh Si-liquid phase boundary, a new sharp hexagonal close-packed (hcp) peak emerged, in addition to a broad liquid Si hump, showing that the re-shocked Si passed the sh-hcp-liquid triple point but remained on the melt boundary. For complete re-shock from 32.7 to 39.3 GPa, the sh peaks were no longer present and the observed line profile matched simulated hcp diffraction peaks and a Gaussian representing liquid Si. Crystalline diffraction peaks were not observed for Si re-shocked from shock-compression stresses of 36.7 GPa or higher, indicating that the liquid-solid phase boundary was not crossed during re-shock of pure liquid Si.

In principle, the broad diffraction peaks observed from shock-melted Si could also be due to amorphization during shock compression. However, the observations of recrystallization during stress release from non-crystalline shocked states and during re-shock from a primarily non-crystalline state (from a shock stress of 32.7 GPa) suggest that the non-crystalline state in shocked Si was liquid rather than a metastable amorphous solid, since large temperature increases are typically required to initiate crystallization of an amorphous solid.

In summary, the in situ, time-resolved XRD measurements of shock-compressed Si showed that all crystalline diffraction peaks vanished above ∼33 GPa, providing unambiguous proof of shock melting. The research was unique in that shock-compressed and re-shocked states were both examined with in situ XRD in the same experiment, allowing Si phase boundaries to be examined during re-shock from the high-pressure shocked state. Recrystallization of liquid Si was observed on nanosecond timescales during both re-shock and during stress release.

Such measurements provide a new approach for distinguishing between shock-induced melting and amorphization. The results also provided new insight into the high-temperature, high-pressure Si phase diagram by constraining the sh-hcp-liquid triple point, by demonstrating that the derivative dP/dT < 0 for the sh-hcp phase boundary, and by constraining the hcp-liquid melt line.  ― Vic Comello

Yoshi Toyoda, Paulo Rigg, Adam Schuman, Nicholas Sinclair, and the Dynamic Compression Sector staff are thanked for their assistance with the plate-impact experiments. The research was supported by the U.S. Department of Energy (DOE) National Nuclear Security Administration (NNSA) under Award No. DE-NA0002007. The work performed at the Dynamic Compression Sector was also supported by the DOE/NNSA under Award No. DE-NA0002442. The sector is operated by Washington State University. This research used resources of the Advanced Photon Source, a DOE Office of Science User Facility operated for the DOE Office of Science by Argonne National Laboratory under Contract No. DE-AC02-06CH11357.