New Polymer Films Conduct Heat Instead of Trapping It 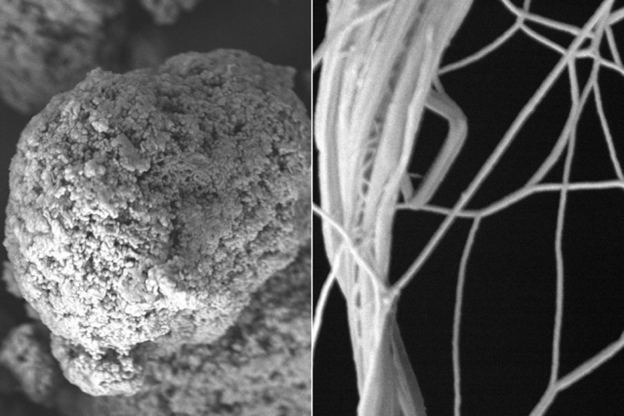 The original MIT News article by Jennifer Chu can be read here.

Polymers are usually the go-to material for thermal insulation. Think of a silicone oven mitt, or a Styrofoam coffee cup, both manufactured from polymer materials that are excellent at trapping heat. Now MIT engineers have flipped the picture of the standard polymer insulator by fabricating thin polymer films that conduct heat — an ability normally associated with metals. In experiments, they found the films, which are thinner than plastic wrap, conduct heat better than ceramics and many metals, including steel. With help from the U.S. Department of Energy’s Advanced Photon Source (APS), the team revealed the mechanism for that metal-like heat performance in polymers. The team’s results, published in the journal Nature Communications, may spur the development of polymer insulators as lightweight, flexible, and corrosion-resistant alternatives to traditional metal heat conductors, for applications ranging from heat dissipating materials in laptops and cellphones, to cooling elements in cars and refrigerators.

“We think this result is a step to stimulate the field,” says Gang Chen, the Carl Richard Soderberg Professor of Power Engineering at MIT, and a senior co-author on the paper. “Our bigger vision is, these properties of polymers can create new applications and perhaps new industries, and may replace metals as heat exchangers.”

In 2010, the team reported success in fabricating thin fibers of polyethylene that were 300 times more thermally conductive than normal polyethylene, and about as conductive as most metals. Their results, published in Nature Nanotechnology, drew the attention of various industries, including manufacturers of heat exchangers, computer core processors, and even race cars.

It soon became clear that, in order for polymer conductors to work for any of these applications, the materials would have to be scaled up from ultrathin fibers (a single fiber measured one-hundredth of the diameter of a human hair) to more manageable films.

“At that time we said, rather than a single fiber, we can try to make a sheet,” Chen says. “It turns out it was a very arduous process.”

The researchers not only had to come up with a way to fabricate heat-conducting sheets of polymer, but they also had to custom-build an apparatus to test the material’s heat conduction, as well as develop computer codes to analyze images of the material’s microscopic structures.

In the end, the team was able to fabricate thin films of conducting polymer, starting with a commercial polyethylene powder. Normally, the microscopic structure of polyethylene and most polymers resembles a spaghetti-like tangle of molecular chains. Heat has a difficult time flowing through this jumbled mess, which explains a polymer’s intrinsic insulating properties.

Xu and her colleagues looked for ways to untangle polyethylene’s molecular knots, to form parallel chains along which heat can better conduct. To do this, they dissolved polyethylene powder in a solution that prompted the coiled chains to expand and untangle. A custom-built flow system further untangled the molecular chains, and spit out the solution onto a liquid-nitrogen-cooled plate to form a thick film, which was then placed on a roll-to-roll drawing machine that heated and stretched the film until it was thinner than plastic wrap.

To understand why these engineered polyethylene films have such an unusually high thermal conductivity, the team conducted x-ray scattering experiments at the X-ray Science Division’s 8-ID-E x-ray beamline at the APS, an Office of Science user facility at Argonne.

“These experiments, at one of the world’s most bright synchrotron x-ray facilities, allow us to see the nanoscopic details within the individual fibers that make up the stretched film,” Jiang says.

By imaging the ultrathin films, the researchers observed that the films exhibiting better heat conduction consisted of nanofibers with less randomly coiled chains, versus those in common polymers, which resemble tangled spaghetti. Their observations could help researchers engineer polymer microstructures to efficiently conduct heat.

“This dream work came true in the end,” Xu says.

Going forward, the researchers are looking for ways to make even better polymer heat conductors, by both adjusting the fabrication process and experimenting with different types of polymers.

Zhou points out that the team’s polyethylene film conducts heat only along the length of the fibers that make up the film. Such a unidirectional heat conductor could be useful in carrying heat away in a specified direction, inside devices such as laptops and other electronics. But ideally, he says the film should dissipate heat more effectively in any direction.

“If we have an isotropic polymer with good heat conductivity, then we can easily blend this material into a composite, and we can potentially replace a lot of conductive materials,” Zhou says. “So we’re looking into better heat conduction in all three dimensions.”

The authors acknowledge support from the U.S. Department of Energy (DOE) Ofﬁce of Energy Efﬁciency & Renewable Energy/Advanced Manufacturing Program (DOE/EEREAMO) under award number DE-EE0005756 (for the fabrication platform and prior to 2/2016); the MIT Deshpande Center (9/2016-8/2017 for market studies), and the U.S. DOE Office of Science-Basic Energy Sciences (Award No. DE-FG02-02ER45977, for fundamental under-standing of structure property relationship since 7/2017). This research used resources of the Advanced Photon Source, a U.S. Department of Energy (DOE) Ofﬁce of Science User Facility operated for the DOE Ofﬁce of Science by Argonne National Laboratory under Contract No. DE-AC02-06CH11357.