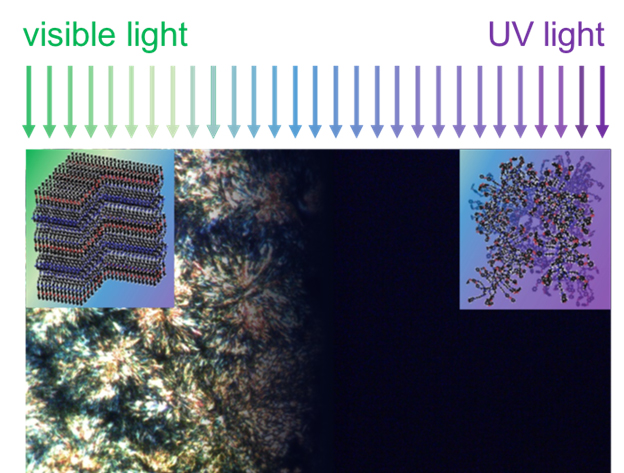 The original University of Illinois College of Engineering press release can be read here.

Polymers are regularly used as thermal insulators for everything from keeping beverages hot to keeping sensitive electronics cool. In some cases, polymers can even be used as thermal conductors to enable efficient heating or cooling. In a new study supported by synchrotron x-ray studies at the U.S. Department of Energy’s Advanced Photon Source (APS), researchers from the University of Illinois at Urbana-Champaign, with colleagues from the Air Force Research Laboratory and Argonne National Laboratory, have designed and demonstrated a novel type of polymer demonstrating a switchable thermal conductivity controlled by light. The material has the potential to route the conduction of heat on-demand and enable new, smarter, ways to manage heat. The findings were reported in the Proceedings of the National Academy of Sciences of the United States of America.

"Polymers are used extensively in engineered systems, but these materials have almost always been considered thermally static. Discovery of polymers that can be optically triggered to quickly switch between thermally conducting and insulating states will open up entirely new opportunities in thermal engineering,” said Paul Braun, a materials science and engineering (MatSE) professor and director of the University of Illinois Materials Research Laboratory and co-author of the journal article.

"To the best of our knowledge, this is the first observation of a light-triggered reversible crystal-liquid transition in any polymeric material. The particularly notable finding in this study is the fast, reversible 3-fold change in thermal conductivity associated with the phase transition," said article first-author Jungwoo Shin, a MatSE Ph.D. student at Illinois.

The thermal switching polymer developed by the Illinois research team (azopolymer/Al/ polyimide/sapphire) demonstrates a powerful control of the thermophysical properties of a polymer in response to light. This ability originates from a photo-responsive molecule,azobenzene, which can be optically excited by ultraviolet (UV) and visible light.

“We synthesized a complex polymer functionalized with light-responsive azobenzene groups. By illuminating with UV and visible light, we could change the shape of the azobenzene group, modulate interchain bonding strength and drive a reversible transition between crystal and liquid,” said co-author Jaeuk Sung, a MatSE Ph.D. student at Illinois.

To capture the thermal conductivity transitions of azobenzene polymers under light illumination, the Illinois research team used a technique called time-domain thermoreflectance (TDTR) developed by David Cahill, a MatSE professor at Illinois and a co-author. “The way heat is carried in polymer is related to the diffusion of vibrational modes. In ordered crystals, these vibrational modes travel much further than what is observed in disordered liquids. As a result, an extreme change in molecular ordering of the polymer can significantly alter the thermal conductivity," Cahill said.

This extreme change in macromolecular ordering, e.g., crystal-to-liquid, is rare in nature, and has not been reported previously for any polymer system in response to light. Thus, unravelling the mechanism of the light-triggered phase transition was critical to understand the polymer’s unique behavior.

“We could observe that, upon light exposure, this material quickly switches from one state to another with dramatically distinct heat transport properties. We used synchrotron-based x-ray scattering to elucidate the structure associated with each state during the transformation, closing the synthesis-characterization-function loop for this sophisticated polymer,” said co-author Cecilia Leal, a MatSE professor at Illinois.

“Keeping an electrical device warm is as equally important as keeping it cold. Materials with such switchable thermal conductivity would enable ways to keep electrified systems safe, reliable and efficient even under extreme condition.” explained Andrew Alleyne, the director of the National Science Foundation (NSF) sponsored Engineering Research Center for Power Optimization of Electro-Thermal Systems (POETS) which supported this work, and a professor in Mechanical Science and Engineering at Illinois.

“The ability to rapidly switch the thermal properties of a polymer by exposure to light opens up exciting new routes for control of thermal transport and energy conversion at the molecular level," added Nancy Sottos, a MatSE professor at Illinois.

This work was supported by the National Science Foundation Engineering Research Center for Power Optimization of Electro-Thermal Systems, with Cooperative Agreement EEC-1449548, and Air Force Office of Scientific Re-search Grant FA9550-16-1-0017. This research used resources of the Advanced Photon Source, a US Department of Energy (DOE) Office of Science User Facility operated for the DOE Office of Science by Argonne National Laboratory under Contract DE-AC02-06CH11357.