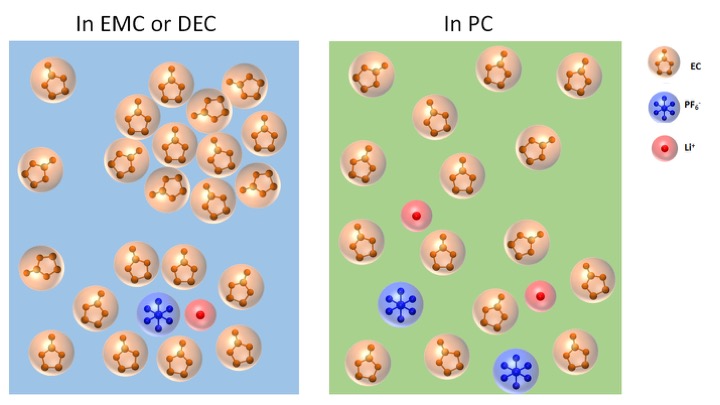 Commercially available since the 1970s, the lithium-ion (Li-ion) battery is the workhorse power source for a variety of applications, including cell phones, laptops, and electric vehicles. However, the basic science underlying how these batteries work at the atomic and molecular levels remains incompletely understood, preventing the technology from reaching its full potential. Lithium-ion batteries are comprised of positive electrodes (anodes), negative electrodes (cathodes), and an electrolyte. The electrolyte’s main role is to act as a conductive pathway for the movement of electricity (in the form of lithium ions, in this case) passing from the anode to the cathode during discharge, allowing the battery to operate. Researchers using the U.S. Department of Energy’s (DOE’s) Advanced Photon Source (APS) at Argonne National Laboratory made a surprising discovery about the complexity of the interactions between different components of the electrolyte, one of the challenges that is set out to be studied in the DOE-funded Argonne-led Joint Center for Energy Storage Research program over the next five years. The fundamental understanding gained from such a study may one day help enhance battery performance.

In a typical commercial lithium rechargeable battery, lithium ions dissolved in electrolytes move from the positive to the negative pole of the battery when it is charging. The ions then move in the opposite way when the battery is in use. Lithium ions, however, do not migrate alone; they are surrounded by electrolytes that facilitate the trip from one pole to the other. Effective electrolytes must have a handful of specific characteristics. While they are in contact with both the anode and the cathode, they must not react with either. They must allow a high degree of mobility of lithium ions between the two electrodes. Lastly, they must be inexpensive if the price of batteries is to continue to fall. The typical electrolyte in reasonably priced lithium-ion batteries is a lithium salt (usually lithium hexafluorophosphate, or LiPF6) mixed into an organic solvent. That solvent is often a mix of ethylene carbonate (EC), diethyl carbonate (DEC), ethyl methyl carbonate (EMC), and propylene carbonate (PC). Lithium ions are thought to associate mainly with EC, forming so-called “solvation shells,” while DEC, EMC, and PC merely smooth the way for these shells to move between the batteries’ poles, like “lubricants.”

The performance, safety, and charge/discharge rate of lithium-ion batteries are determined by a variety of the electrolyte’s physiochemical characteristics, including chemical stability and transport properties. Much research has been done to understand the impact that microscopic structures have on these properties for battery electrolytes such as LiPF6/EC/EMC and LiPF6/EC/DEC. Although traditional spectroscopy techniques such as NMR, FTIR, and Raman are commonly used to provide tantalizing hints about the binding of solvent molecules, they cannot detect solvent aggregate formation.

Small angle x-ray scattering (SAXS), a technique for analyzing the elastic scattering behaviors of x-rays when traveling through a material, has been proven to be a very powerful technique for providing direct size information of nanometer-scale structures such as colloids, porous materials, biomolecules, and proteins.

A team of researchers from Northern Illinois University and Argonne used SAXS experiments performed at the X-ray Science Division 12-ID-B and -C beamlines of the APS (an Office of Science user facility at Argonne) to study different varieties of lithium-ion battery electrolytes. Surprisingly, the researchers found that the cyclic carbonate, EC, formed 1-nm-sized clusters when mixed with a linear carbonate, either EMC or DEC, while no such clusters were found when EC was mixed with another cyclic carbonate, PC, likely due to differences in dielectric constant between the linear and cyclic carbonates. Adding LiPF6 to either the EC/EMC mixture or the EC/DEC mixture resulted in the formation of LiPF6 structure roughly 0.6 nm in size, corresponding to the previously reported size of LiPF6 contact ion pairs. Surprisingly, LiPF6 contact ion pairs were absent in EC/PC electrolyte (Fig. 1). The presence of EC nanoclusters and LiPF6 ion pairs in linear carbonate is thought to decrease battery performance by reducing electrolyte viscosity and conductivity, respectively. Unfortunately, even though neither EC nanoclusters nor LiPF6 ion pairs are present in the LiPF6/EC/PC electrolyte, the defoliation of graphite by PC hinders the application of PC in commercial lithium-ion batteries consisting of graphite anodes.

These findings increase the knowledge of the behaviors of lithium-ion battery electrolytes and could inspire improvements to the design of the macroscopic properties of these important electrolytes. - Chris Palmer