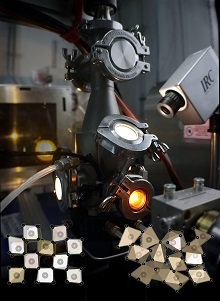 Adapted from the Stony Brook University press release, which can be read here.

Nuclear power is part of the worldwide energy mix, accounting for around 10% of global electricity supply. Safety is the paramount issue. Uranium dioxide (UO2) is the major nuclear fuel component of fission reactors, and the concern during severe accidents is the melting and leakage of radioactive UO2 as it corrodes through its protective containment systems. Understanding—in order to predict—the behavior of UO2 at extreme temperatures is crucial to improved safety and optimization of this electricity source.

A paper published in Science and written by researchers from Argonne National Laboratory, Stony Brook University, Materials Development, Inc., the Carnegie Institution of Washington, and Brookhaven National Laboratory takes this understanding a big step further—providing the scientific and engineering community with the first structure measurements of molten uranium dioxide.

“We melted uranium dioxide and studied its structure using x-rays; we also studied structural changes in hot, solid UO2 before melting,” said Stony Brook scientist Lawrie Skinner, lead author on the Science paper. “We found that, upon melting, the UO2 structure goes from 8 oxygen atoms surrounding each uranium atom down to an average of 6.7 oxygen neighbors. This affects the predicted physical properties of the liquid, like its viscosity.”

Even though the behavior of UO2 upon melting is of critical importance in extreme nuclear reactor accidents—such as Chernobyl in 1986 and Fukushima in 2011—the very high temperatures needed for testing had severely limited investigation of this melt. This prevented structural studies and an accurate understanding of the inter-atomic interactions.

In fact, previous to these findings, no experimental structure measurement of molten UO2 had been reported. While physical property measurements and molecular dynamics models did exist for molten UO2, they were often parameterized from solid-state properties and exhibited large differences in their melt structures. This structural uncertainty resulted in molten UO2 models that exhibited differing characterizations of physical properties such as viscosity and compressibility—properties that are significant in determining nuclear reactor safety.

“Our synchrotron x-ray diffraction measurements, by contrast, find a precise value r UO of 2.22 ± 0.01 Å at 3270K, providing a new tool to test the validity of liquid UO2 models,” the paper reports. Adds Skinner, “This work finds relatively high U-U mobility in the melt, a key reference point against which structural models may now be tested.”

The scientists combined laser heating, sample levitation, and synchrotron x-ray diffraction studies carried out at the X-ray Science Division 11-ID-C beamline at the U.S. Department of Energy’s Advanced Photon Source at Argonne to obtain pair distribution function measurements—describing the probability of finding atom pairs with a given separation r—of hot solid and molten UO2. Levitation of the sample was crucial. Uranium dioxide melts around 3140K, posing serious problems for traditional furnace heating methods. Most container materials (such as magnesium oxide, platinum, and zirconium dioxide, among others) melt or become chemically reactive at these extreme temperatures.

To avoid chemical reactions with the sample container, the researchers aerodynamically levitated the sample on a stream of Argon gas while it was heated with a 400W continuous CO2 laser. The levitation negated any solid contact with the sample, maintaining high chemical purity.

The work was a collaboration led by the Argonne X-ray Science, Chemical Sciences and Engineering, and Nuclear Engineering divisions. Crucial assistance was provided by the private company Materials Development, Inc. (MDI), an Evanston, Illinois, firm whose Materials Instrumentation Division developed the levitation equipment (MDI’s president also works at the Advanced Photon Source at Argonne). “This work was made possible by the strong partnership and collaboration of Stony Brook researchers with the Argonne National Lab,” said Skinner.

“In the future, we would like to investigate the atomic structure and properties of important U-containing compounds. “This includes eutectic U-Zr-O, which forms in extreme accidents as the UO2  melts and reacts with its zirconium cladding.”

The research was supported by the U.S. Department of Energy’s (DOE) Office of Basic Energy Sciences (BES); a DOE Small Business Innovation Research grant; and the Argonne National Laboratory Directed Research and Development Program. One of the paper’s co-author, Malcolm Guthrie—a staff scientist at the Geophysical Institution of the Carnegie Institute of Washington—was supported by an award from an Energy Frontiers Research in Extreme Environments Center (EFree) that was funded by the DOE Office of BES. This research used resources of the Advanced Photon Source, a U.S. Department of Energy Office of Science User Facility operated for the DOE Office of Science by Argonne National Laboratory under Contract No. DE-AC02-06CH11357.

The Argonne press release by Angela Hardin on this result can be read here.

The Science Perspectives article, “Taking the measure of molten uranium oxide” by Alexandra Navrotsky can be read here