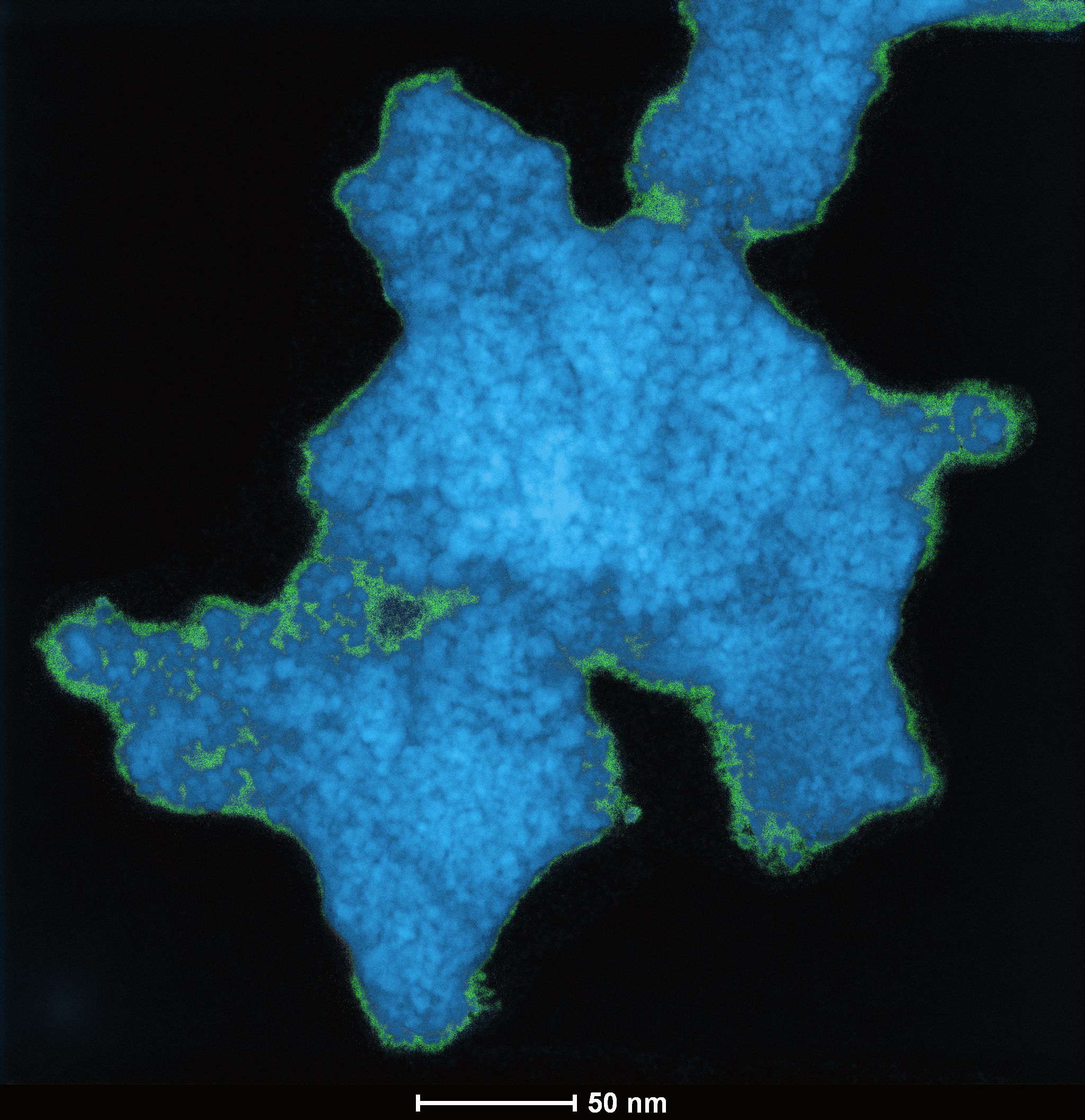 Metal oxides such as titanium dioxide (TiO2) are fascinating and versatile substances that can be used in many applications, including photovoltaic devices, batteries, and other vital technologies.  But the utility of a particular material for a particular purpose may be limited, and common techniques to chemically "fine tune" their properties to fit specific parameters, such as doping or surface coating, are not always practical or effective.  A group of researchers from a diverse set of institutions decided to try a different strategy by cross-linking metal oxide molecules with boron to create clusters of hybrid networks with new chemical and electrical properties and then characterizing the material at the U.S. Department of Energy’s Advanced Photon Source (APS). Their work, which was published in Nature Materials, opens possibilities for the precise tailoring of such materials for specific purposes.

The team's approach involved identifying a robust boron-containing cluster capable of withstanding the harsh conditions inherent in the cross-linking processes.  The researchers from the University of California, Los Angeles; the University of California, Santa Barbara; Cairo University (Egypt), Purdue University; Argonne National Laboratory; and the University of Oregon settled on a three-dimensional aromatic benzene analog, [NnBu4]2[B12(OH)12], which is a derivative of dodecaborate of the [B12(OH)12]2- type.  After annealing a bulk sample at 500° C in air, creating a cross-linked polymer of clusters and boron oxide, the researchers combined the substance with titanium tetraisopropoxide, resulting in the formation of a shiny black solid hybrid material.  They used various techniques to analyze this material's physical and electrochemical characteristics, including x-ray absorption spectroscopy at the Materials Research Collaborative Access Team (MR-CAT) 10-BM-A,B x-ray beamline at the APS, and total scattering data suitable for pair distribution function (PDF) analysis collected at X-ray Science Division beamline 11-ID-B beamline at the APS.

The experimental team next investigated the material's electronic properties.  Because dodecaborate derivatives have been previously shown to exhibit pseudo-metallic redox activity, the researchers looked for clusters in redox states.  Electroparamagnetic resonance spectroscopy and superconducting quantum interference device magnetometry showed that the material is paramagnetic, which appears to be related to the cross-linked molecular boron oxide material.  The material also showed an electron transfer rate considerably higher than that of either anatase or rutile TiO2, indicating its ability to enhance electronic properties when linked to metal oxides.

To further investigate these characteristics, the experimenters constructed pouch-cell supercapacitors using the material in the active layer.  These showed superior capacitance and performance compared to both TiO2 forms, which appears to be directly related to the cross-linked molecular nature of the hybridized material.  Combined with the reduced charge-transfer and ionic diffusion resistance of nanosized TiO2, these properties could make this material highly desirable for energy storage applications.

The study group also examined the hybrid material's potential use in visible light photochemical processes by testing it as a photocatalyst in the decomposition of various water contaminants.  Under a low-power LED red-light source, three common dye contaminants showed markedly faster degradation with the new material than with a pristine TiO2 control.  Visible light excitation appears to stimulate electron transfer and generate reactive oxygen species that efficiently break down organic contaminants.  The lack of precious metal elements in the new material makes it an even more attractive and inexpensive candidate for such applications.

While the current experiments provide an excellent demonstration of how the properties of common metal oxide materials can be altered and enhanced through molecular cross-linking techniques, the researchers note that further work is needed to better understand the underlying chemistry and enable more exact and controlled modifications.  One possibility is to expand the technique with the use of other metal oxides such as ZrO2.  Nevertheless, the significantly enhanced properties achieved in the material synthesized in these experiments makes this relatively simple, room-temperature approach to molecular customization enormously promising, not only for TiO2 but also other metals and materials.  — Mark Wolverton

A.M.S. thanks the University of California, Los Angeles Department of Chemistry and Biochemistry for start-up funds, 3M for a Non-Tenured Faculty Award, and the Alfred P. Sloan Foundation for a research fellowship in chemistry. Z.J.B. was supported by a grant from the BASF Corporation, and the solid-state MAS NMR measurements at the University of California, Santa Barbara (UCSB), made use of the shared facilities of the UCSB MRSEC (NSF DMR 1720256), a member of the Materials Research Facilities Network (www.mrfn.org). E.C.W. and J.T.M. were supported by the U.S. National Science Foundation (NSF) Energy Research Center for Innovative and Strategic Transformations of Alkane Resources (CISTAR) under the cooperative agreement no. EEC-1647722. J.I.Z. thanks the Student and Research Support Fund for financial support. The computational modelling benefited from access to the Extreme Science and Engineering Discovery Environment, which is supported by NSF Grant ACI-1053575. R.R.L. and M.D. were supported by the U.S. Department of Energy (DOE), Office of Science-Basic Energy Sciences, Division of Chemical Sciences, Biosciences and Geosciences under Contract DE-AC02-06CH11357. MR-CAT operations are supported by the DOE and the MR-CAT member institutions. This research used resources of the Advanced Photon Source, a U.S. DOE Office of Basic Energy Sciences and Office of Science User Facility, operated for the DOE Office of Science by Argonne National Laboratory under contract no. DE-AC02-06CH11357.