It has long been known that the properties of materials are crucially dependent on the arrangement of the atoms that make up the material. For example, atoms that are further apart will tend to vibrate more slowly and propagate sound waves more slowly. Now, researchers from Brookhaven National Laboratory have used Sector 30 at the Advanced Photon Source (APS) to discover “topological” vibrations in iron silicide (FeSi). These topological vibration arise from a special symmetrical arrangement of the atoms in FeSi and endow the atomic vibrations with novel properties such as the potential to transmit sound waves along the edge of the materials without scattering and dissipation. Looking to the future one might envisage using these modes to transfer energy or information within technological devices.

In quantum mechanics, atomic motions in crystals are described in terms of vibrational modes called phonons. Similar to electrons moving in metals, phonons can also propagate through materials. The detailed properties of these excitations determine many of the thermal, mechanical and electronic properties of the material. In 2017, part of the current collaborative team from the Chinese Academy of Science, theoretically predicted the existence of the topological phonons in transition metal monosilicides. As shown in Fig. 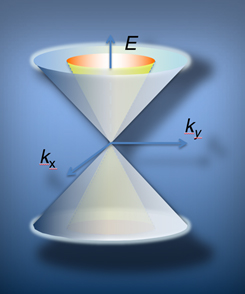 To experimentally prove the existence of these novel phonon excitations, one needs a technique that can probe the full bulk phonon dispersion with high energy and momentum resolution. The HERIX device at X-ray Science Division beamline 30-ID-B,C of the APS is among the very few machines in the world in which this experiment can be done. The research team performed comprehensive inelastic x-ray scattering measurements on high quality single crystal FeSi and successfully resolved double Weyl phonon dispersions beautifully consistent with theoretical predictions.

This material is based upon work supported by the U.S. Department of Energy, Office of Basic Energy Sciences, Early Career Award Program under Award No. 1047478. Work at Brookhaven National Laboratory was supported by the U.S. Department of Energy, Office of Science, Office of Basic Energy Sciences under Contract No. DE- SC0012704. The IXS experiments were performed at 30ID in the Advanced Photon Source, a U.S. Department of Energy (DOE) Office of Science User Facility operated for the DOE Office of Science by Argonne National Laboratory under Contract No. DE-AC02-06CH11357. We acknowledge the support from the National Key Research and Development Program of China (Grant No. 2016YFA0300600), the National Natural Science Foundation of China (Grants No. 11674369 and No. 11774399), and the Chinese Academy of Sciences (XDB07020100 and QYZDB-SSW-SLH043).