Giant Molecules as a Unique Platform for Unconventional Nanostructures 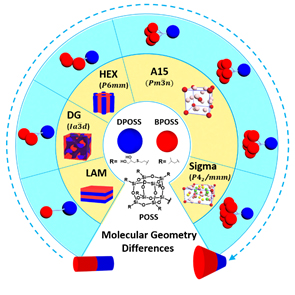 The engineering of materials into ordered structures is always a critical step to transfer and amplify microscopic molecular functionalities to macroscopic material properties. Tremendous efforts have been made to study the relationship between molecules and the corresponding supramolecular structures as the base for further study of structure-property relationship. Giant molecules are a family of macromolecules with well-defined three-dimension structures built up from molecular nanoparticles with precise chemical structures. They typically include folded globular proteins, polyhedral oligomeric silsesquioxane (POSS), fullerene (C60), and polyoxometalates (POMs). A multitude of studies have demonstrated that they are a unique and efficient platform upon which to construct various ordered patterns in a desired feature size. Recently, researchers using the U.S. Department of Energy’s Advanced Photon Source (APS) have shown that altering the composition and sequence of giant molecules answers some fundamental questions about how giant molecules can be used for the assembly of controllable, well-defined, self-assembled nanostructures.

As shown in Fig. 1, a set of giant molecules were constructed by linking one hydrophilic polyhedral oligomeric silsesquioxane nanoparticle (DPOSS, 14 hydroxyl groups functionalized POSS) with different numbers (n) of hydrophobic POSS(s) (BPOSS, 7 isobutyl groups functionalized POSS). The self-assembly study shows that a supramolecular structure formation sequence ranging from lamella (LAM), double gyroid (DG), hexagonal closed packed cylinders (HEX), to Frank-Kasper (F-K) A15, and further to F-K Sigma phase could be observed by turning the number of hydrophobic BPOSS (see the structure cartoons in Fig. 1). The phase formation sequence here is dominated by a change of the geometry of whole molecules. Increasing the number of BPOSS, the shape of the whole molecules changes from a linear shape (which forms LAM), to fan-like shape (which forms HEX), and further to cone-like shape (which forms the F-K A15 and F-K Sigma phase). The samples were well-characterized by small-angle x-ray scattering (SAXS) and transmission electron microscopy by a team of researchers from the University of Akron, Northern Illinois University, Sichuan University (China), Argonne National Laboratory, RIKEN CLST-JEOL Collaboration Center (Japan), JEOL RESONANCE Inc., South China University of Technology (China), and Peking University (China). The SAXS work was performed at the X-ray Science Division 12-ID-B and 12-ID-C,D beamlines at the APS, an Office of Science user facility at Argonne. 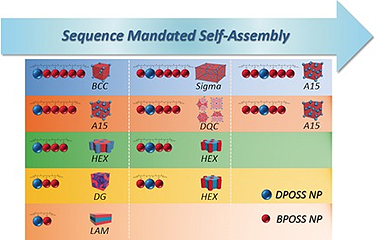 Besides the composition factor, sequence controlled giant molecules were also designed and studied. A series of sequence controlled chain-like giant molecules based on one hydrophilic DPOSS and multiple hydrophobic BPOSS nanoparticles were synthesized. As shown in Fig. 2, besides the compositional variation (shown in the vertical direction of the table), the sequence of the giant molecule chain also plays an important role in the supramolecular phase formation process (shown in the horizontal direction of the table), resulting in versatile supramolecular structures.

This set of samples provides a model system for understanding the structural evolution pathways and relationships among different phases. They also offer the opportunities to design and synthesize functional molecules with certain microscopic assembly structures, and further introduce macroscopic properties to the materials with potential applications in catalysts and nano-medicine.  — Tao Li