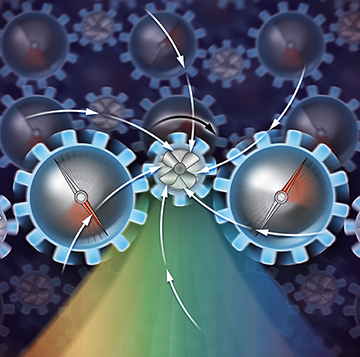 The original University of Tennessee, Knoxville article can be read here.

Sometimes a good theory just needs the right materials to make it work. That’s the case with recent findings by University of Tennessee, Knoxville’s (UT’s) physicists and their colleagues, who designed a two-dimensional magnetic system that points to the possibility of devices with increased security and efficiency, using only a small amount of energy. The researchers studied the hidden physical properties of the material by utilizing high-brightness x-rays from the U.S. Department of Energy’s Advanced Photon Source (APS), an Office of Science user facility at Argonne National Laboratory. By exploiting a hidden symmetry in the material, their results support a theory first proposed 20 years ago. The results were published in Nature Physics.

People have known about magnetism since ancient times but are still learning how it works, especially at the quantum scale. In ferromagnets, atoms and their neighbors have magnetic moments (caused by spin) that all align along the same direction. We can easily control that direction by an external magnetic field. In antiferromagnets, however, the magnetic moments anti-align with their neighbors and alternate one-by-one. This microscopic spin alignment perfectly shields any external magnetic field and is hidden from the outside world. Antiferromagnets were discovered by Louis Néel in 1948, but were described in his 1970 Nobel lecture as being theoretically interesting but technologically useless.

Jian Liu, UT assistant professor of physics, explained that generally spins in an antiferromagnet can rotate any way they want as long as the anti-alignment is maintained. But, if the interaction between the atoms is anisotropic, “it will give the spin a certain preferential direction.” This is the DM (Dzyaloshinskii-Moriya) interaction originating from relativistic effect, and Liu explained that it does two things. First, it tilts (or cants) the spins slightly away from the perfect anti-alignment, which is good because this means that an external magnetic field won’t be completely shielded and can couple to the canted spins, even if they’re staggered. There’s a tradeoff, however, in that while this interaction allows for canting, it pins the direction.

“So you are gaining some control,” Liu said, “but you’re also losing some flexibility. And that evens out.”

Yet how, exactly, is this symmetry hidden? Liu said it’s hiding if you only look at things from a local scale. “For example, if you sit at one spin, and you look around, you see a very anisotropic environment. Basically, the other spins—your neighbors—are telling you that you have to cant (a certain way) to be compatible with them. If you look at a very global scale—if you consider all the spins—it turns out the entire system is perfectly isotropic and preserves this rotational symmetry.

“You can think of it this way: hundreds years ago, people thought the earth was flat. That’s because we were sitting at a very local scale. We thought that if we continue to walk along one direction we would never come back to the same point. But it turns out the earth is a sphere, so if you continue walking north at some point you pass the pole and then you come back. So if you look at the earth on a global scale, you see that it has rotational symmetry, which you would not notice if you’re bound to the surface.”

The role of this global symmetry in antiferromagnetic systems was actually predicted two decades ago. Liu said while the theory was fascinating, the material used to test it wasn’t suitable for the task.

For their studies, he and his colleagues grew samples made of alternating single- and bi-layers of strontium, iridium, and oxygen (SrIrO3) and strontium, titanium, and oxygen (SrTiO3), respectively, using pulsed laser deposition on a SrTiO3 substrate. They focused on three points: the material’s chemistry, preservation of the symmetry, and a crucial additional layer. Iridium proved to be an important choice because it provided strong DM interaction. The structure enables the hidden symmetry, largely because the team separated the layers with a “spacer” of SrTiO3 so that each layer would have its own two-dimensional properties.

The inspiration for this research came last year after Liu and fellow scientists published results on controlling ultrafine materials in Physical Review Letters. He explained that once they found a way to separate the layers to explore intrinsic two-dimensional properties, they realized they had a material that could test the symmetry theory.

Aside from scientific discovery, these latest research findings also present the potential to control antiferromagnetism for more secure and efficient devices.

What that means, he continued, is that we don’t want the bits in our computer hard drive to get too close to each other because each bit is one ferromagnet. This limits the density of the information storage. “Now if the bits are antiferromagnetic, they will be magnetically invisible to each other, and you can pack them right next to each other. Essentially, the storage capacity will dramatically increase.”

Another possible benefit is more efficient switching in devices.

Liu said that switching the spins up and down in ferromagnets is a slow and energy-costly process because we have to turn around its magnetic field on a macroscopic scale. With the anti-aligned spins in antiferromagnets under the hidden symmetry, he said, “it displays no magnetic field, and we just need to apply a little bit of energy to turn it on and off or rotate it. The amount of energy that we put into the system is very tiny compared to the self-anti-alignment energy, but the spins still respond instantaneously, and that makes the switching process much faster.”

The initial results were very encouraging, yet the experimental team wanted some additional verification. “At the very beginning we couldn’t believe what we saw because the effects were really strong and the amount of energy you put into the system is one-thousandth of (its) internal energy. It almost sounds too good to be true.”

For validation, they took their questions to UT Physics Professor (and Lincoln Chair) Cristian Batista, a theorist in condensed matter physics.

“He guided us through all the detail of the theory and he came up with the explanation: not just qualitatively but actually quantitatively,” Liu said. “He did the simulation and found that everything perfectly fell into the requirements for that theory of hidden symmetry.”

The authors acknowledge experimental assistance from H.D. Zhou, E. Karapetrova, C. Rouleau, Z. Gai, J.K. Keum and N. Traynor. J.L. acknowledges support by the start-up fund and the Transdisciplinary Academy Program at the University of Tennessee. J.L. and H.X. acknowledge support by the Organized Research Unit Program at the University of Tennessee and support by the DOD-DARPA under grant no. HR0011-16-1-0005. M.P.M.D. and D.M. are supported by the U.S. Department of Energy (DOE) Office of Science-Basic Energy Sciences, Early Career Award Program under award number 1047478. H.S. and C.D.B. are supported by funding from the Lincoln Chair of Excellence in Physics. D.K. and L.H. acknowledge the support by the ERDF (project CZ.02.1.01/0.0/ 0.0/15_003/0000485) and the Grant Agency of the Czech Republic grant (14-37427 G). A portion of the work was conducted at the Center for Nanophase Materials Sciences, which is a DOE Office of Science User Facility. This research used resources of the Advanced Photon Source, a U.S. DOE Office of Science User Facility operated for the U.S. DOE Office of Science by Argonne National Laboratory under Contract No. DE-AC02-06CH11357.