Putting the Heat on an Additive-Manufactured Alloy 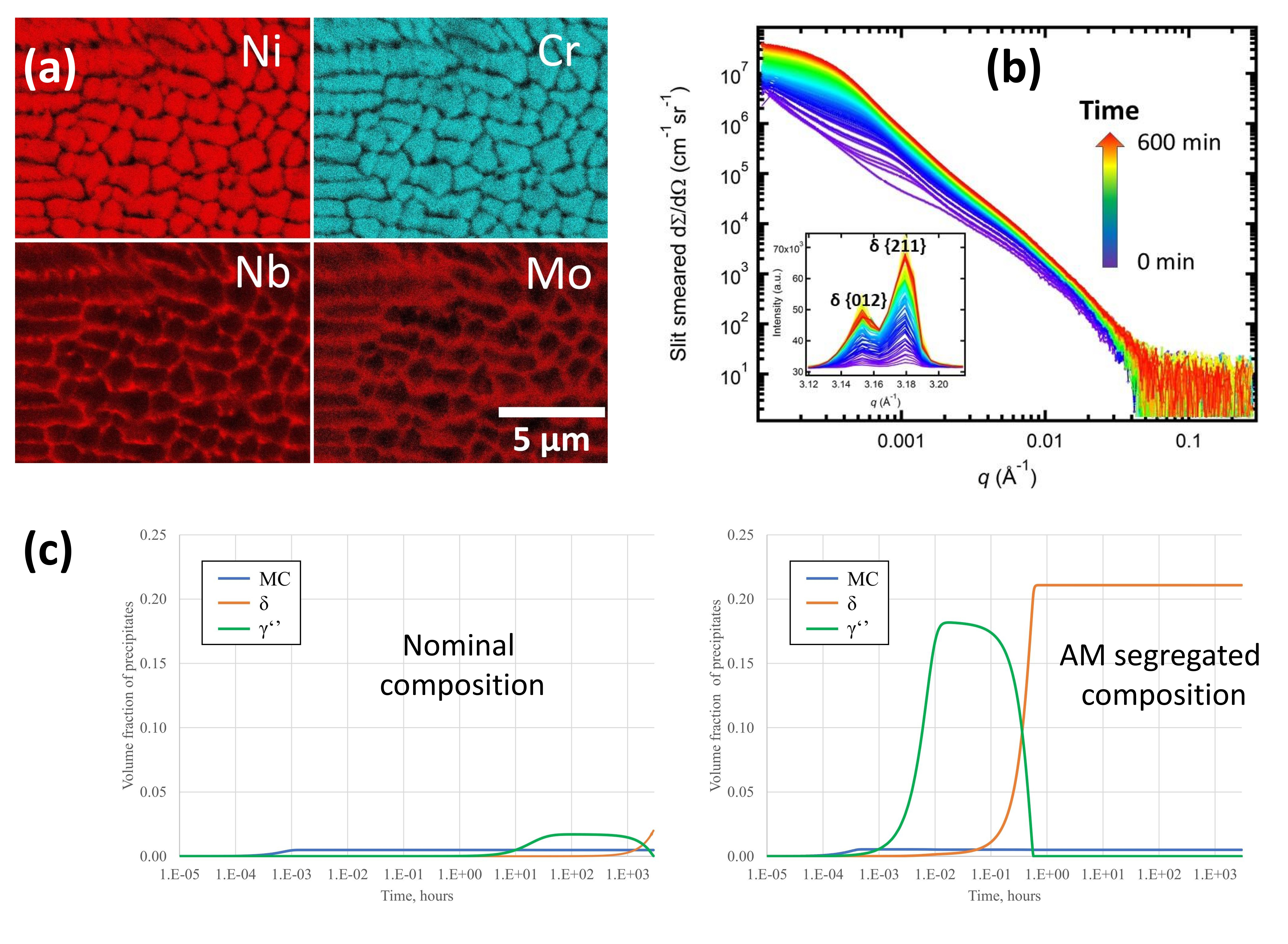 1 × 102) formation of precipitate phases comparing with the nominal composition (left panel).">As the techniques of additive manufacturing (AM), more popularly known as “3-D printing,” become ever more versatile and applicable for diverse purposes, they sometimes pose unique challenges that are not present with more traditional manufacturing methods.  In additive-manufactured metals and alloys, such problems can result in microstructural defects that lead to reduced strength and stress resistance, an issue commonly addressed by post-build heat treatment.  But this approach can also have undesirable side effects.  Researchers from the National Institute of Standards and Technology (NIST) used the U.S. Department of Energy’s Advanced Photon Source (APS) to examine the AM alloy Inconel 625 (IN625) in an effort to better understand the effects of heat treatment on AM alloy microstructure and phase evolution.  Their work was published in Acta Materialia.

A widely-used superalloy in the aerospace, marine, and nuclear industries where its high strength and corrosion resistance are critical advantages, IN625’s limited machinability makes it attractive for AM as an alternative and thus a good model for studying AM alloys.  Using heat-treated IN625 samples created by laser powder-bed fusion, the investigators used electron microscopy and thermodynamic modeling, and in situ synchrotron small-angle and ultra small-angle x-ray scattering (USAXS) and x-ray diffraction (XRD) techniques for experiments at the X-ray Science Division (XSD) 11-BM-B powder diffraction beamline and the XSD 9-ID-C USAXS facility. The APS is an Office of Science user facility at Argonne National Laboratory.

While the AM principle of using a laser or electron beam to build up material layer by layer is very versatile, it is also a volatile and somewhat unpredictable process at the microscale, involving complex repeated cycles of heating and cooling that inevitably result in a certain degree of microstructural inhomogeneity.  One form often seen in AM metals is elemental segregation, which can create defects including residual stress and nonequilibrium phase structure.  These are generally alleviated by post-build stress-relief and homogenization heat treatments.

The unexpected side effects of these heat treatments were the focus of the current work, which includes some of the first detailed in situ investigations of the phenomenon.  Ex situ studies of IN625 AM samples with scanning electron microscopy (SEM) and x-ray diffraction after stress-relief heat treatment at 870° C for 0.5, 1, 4, and 8 hours (compared with as-built samples) reveal the phase profiles and the presence of undesired platelet-shaped delta-phase precipitates in the interdendritic regions, which are known to degrade mechanical performance of IN625.

With the in situ x-ray scattering and diffraction techniques at the APS USAXS facility, the researchers were able to observe the actual formation of these delta-phase precipitates.  These methods also allowed both time- and temperature-dependent studies of the phase evolution kinetics within the same sample volume, including enough data for thermodynamic modeling.  Across the entire temperature range of the heat treatment from 800° C to 870° C, the delta-phase precipitates were seen to grow very rapidly, beginning less than five minutes after the commencement of heat treatment, suggesting a very low nucleation barrier.  Notably, the growth kinetics was found to be at least 100 times faster than with conventional alloys of similar composition.

The atomic structure of these precipitates remains stable after formation.  Arrhenius analysis revealed an activation energy for these precipitates of (131.04 ± 0.69) kJ mol-1, far lower than that seen in, for example, niobium (Nb) diffusion in nickel alloys. Because the precipitates initially form at interdendritic regions with high amounts of Nb, the investigators note that long-range Nb diffusion is not necessary for the initiation of the delta phase in AM IN625.

Applying a second heat treatment at 1150° C for 1 hour succeeded in removing the delta-phase precipitates, resulting in a single-phase face-centered cubic structure.  However, this second heat treatment was also found to promote grain growth that could possibly weaken the alloy's mechanical strength.  The research team is continuing to explore, in greater detail, the benefits and adverse effects of this homogenization heat treatment.

Although the current study was confined to AM IN625, the investigators note that their general findings are applicable to many other AM alloys, since phenomena such as elemental segregation with undesired phase precipitates are an almost inevitable byproduct of AM technology.  Extending the multifaceted approach taken in this work, combining ex situ and in situ EM and XRD with thermodynamic modeling, to other AM alloys will lead to a better understanding of their phase evolution in comparison with their wrought counterparts, and ultimately to new strategies to avoid or mitigate microstructural defects of additive-manufactured metal alloys.  — Mark Wolverton

We thank Jan Ilavsky and Saul Lapidus for their help at the beamlines 9-ID and 11-BM at the Advanced Photon Source. The Engineering Laboratory at NIST built the IN625 samples used in this study. This research used resources of the Advanced Photon Source, a U.S. Department of Energy (DOE) Office of Science User Facility operated for the U.S. DOE Office of Science by Argonne National Laboratory under Contract No. DE-AC02-06CH11357.