Coping with Strain in Metal Hydrides 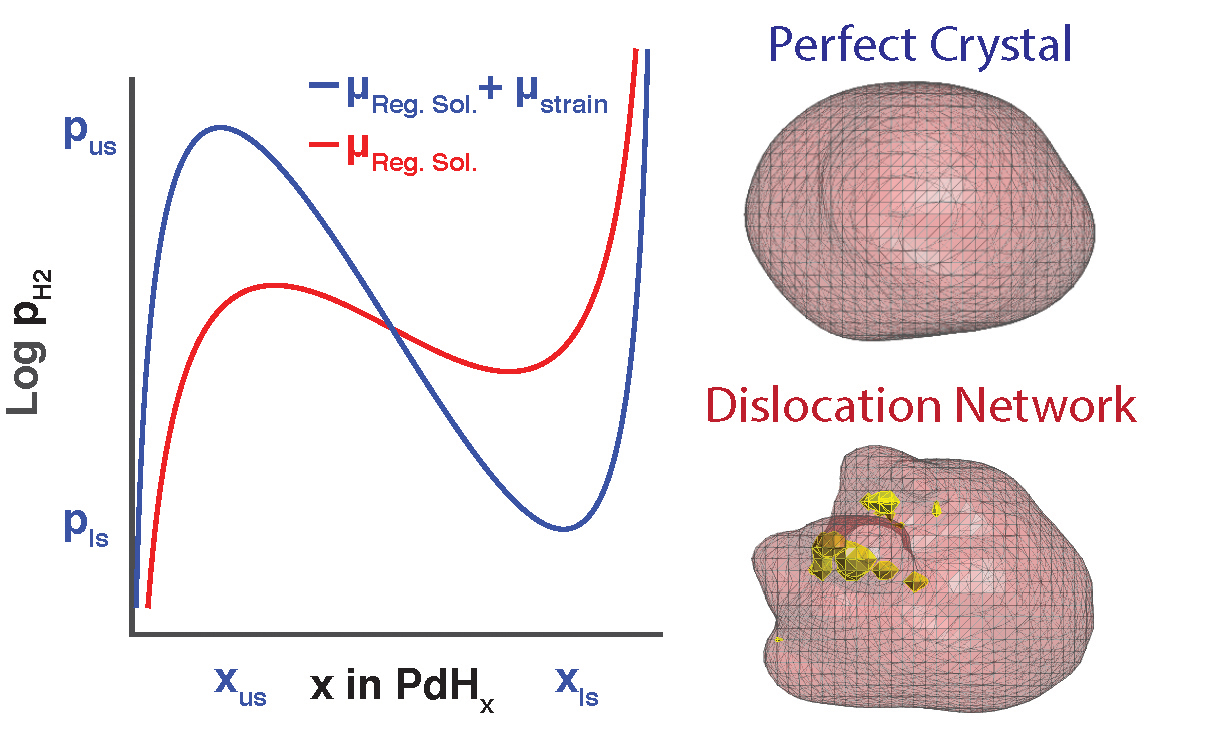 Hydrogen fuel cells can be used for portable technologies that must function for long periods without recharging. Such fuel cells often use metal hydrides to store hydrogen, and work much the same way as lithium-ion battery cathodes that store lithium. They have the same problems, too: charging and draining the metal hydride stresses the material and causes tiny defects to form, defects that degrade the material’s ability to store hydrogen. Eventually the storage material can only hold a fraction of the hydrogen it could originally, much like an old lithium battery in a cell phone that ceases to hold a charge. Materials scientists have known that the strain on the storage material is the primary reason for degradation, but they didn’t know the details. Now, for the first time, researchers working at the U.S. Department of Energy’s (DOE’s) Advanced Photon Source (APS) have obtained detailed images of strain defects caused by repeated charge/discharge cycles in hydrogen. Their work shows the optimal size for a particle of metal hydride in a palladium-hydride storage system, and it could ultimately help engineer storage materials that take strain in controlled ways that do not damage, but rather improve them.

Researchers from Argonne National Laboratory, the Canadian Nuclear Laboratories, and the DOE’s SLAC National Accelerator Laboratory used the APS to image these defects as they formed in real time. They took a sample of palladium, a model storage material for hydrogen storage, and forced hydrogen through it. At the same time, they illuminated the palladium with x-rays from the X-ray Science Division 34-ID-C x-ray beamline at the APS, which is an Office of Science user facility at Argonne. Utilizing Bragg coherent diffractive imaging, they recorded the manner in which the x-rays scattered; changes in the x-ray scattering pattern allowed the researchers to see structural changes and defects that formed within the metal.

This is only the second time ever that this technique — Bragg coherent x-ray diffraction imaging — has been utilized to catch defects in the act of forming. Advances in algorithms and beamline optics at the APS were what enabled the researchers to succeed. The 34-ID-C beamline is optimized for coherent x-ray flux that can be focused down to a spot just 1 micron across, or 1000 nanometers. This is small enough to use Bragg coherent x-ray diffraction imaging to watch the nanoscale defects form step-by-step.

With APS x-rays, the researchers could now see not only where the defects formed, but also how the defects altered the pressure at which the palladium could bind and release the hydrogen (Fig. 1). They also discovered that the best size for the palladium particles is 300 nanometers or smaller. Particles in this size range take the least strain and suffer far fewer defects when absorbing and releasing hydrogen than do larger particles. Previously, hydride manufacturers hadn’t considered particle size an important parameter; they often use metal powders that contain many different sizes. Grading the powders and using only particles 300 nanometers across or smaller should make a hydrogen storage device, or a lithium ion battery cathode, that will cycle and last quite a bit longer than current technologies.

The researchers are also excited about using the APS to study how defects in metal hydrides could be used in a controlled way to actually improve the qualities of the material, much the way semiconductors are doped with impurities that introduce defects to change their electronic properties. The 34-ID-C beamline optics are optimal for using Bragg coherent x-ray diffraction imaging, and this technique could potentially be used to investigate similar strain defects in solar cells of any other crystalline material that gets repeated nanoscale strain damage.  — Kim Krieger