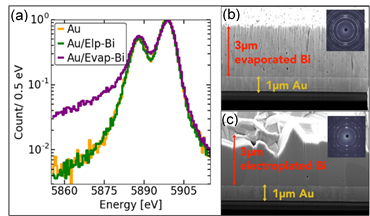 From detecting x-rays from outer space to elemental mapping at the nanoscale, transition-edge sensors (TES) are essential tools for scientific discovery.  These devices measure the electrical resistance of superconducting materials close to their transition temperature, a regime in which small changes in temperature result in large changes in resistance. The energy of an x-ray photon absorbed by a TES is thus converted to heat and the resulting change in resistance is proportional to x-ray energy. While bismuth excels as an x-ray absorbing component for TES devices, the energy spectrum generated by these devices suffers from an unexpected non-Gaussian line shape, specifically a low-energy tail, which limits the device’s ability to detect and map trace elements. However, by electroplating the bismuth film rather than preparing it via evaporation, researchers have recently eliminated this low-energy tail. Using high energy x-ray diffraction at the U.S. Department of Energy’s Advanced Photon Source (APS), the researchers found order-of-magnitude larger grain sizes in the electroplated bismuth, resulting in trapping of thermal energy in the absorber, and thus the desired spectral line shape.

To isolate the effect of bismuth morphology, the team of researchers from Argonne National Laboratory, Northwestern University, the National Institute of Standards and Technology, and the University of Colorado compared three TES devices prepared in near-identical fashion on the same die. In each device, the absorber was deposited onto a 1-μm-thick film of gold, which was connected to a Mo/Cu superconductor through a copper bank. This ensured thermal coupling between the absorber and the superconductor was identical. The bismuth film was either electroplated (elp-Bi) or evaporated (evap-Bi) into a 3-μm-thick film onto the gold. On the third device, no bismuth was added, and the gold acted alone as an x-ray absorber.

The non-Gaussian nature of the spectrum generated by the conventionally prepared Au/evap-Bi TES is shown in Fig. 1a (purple). Instead of two overlapping Gaussians expected from the Kα lines of the Mn x-ray source, a significant tail is seen on the low-energy (LE) side of the spectrum, causing a simple Gaussian fit to fail. This LE tail is not observed in the Au/elp-Bi (green) nor in the Au-only devices (yellow), and a Gaussian function models both line shapes well.

Turning to morphology, the researchers examined focused-ion beam cross-sections of Bi films in a scanning electron microscope. Figure 1 shows the striking difference in morphology they immediately found; the evap-Bi (b) is made of narrow column-like grains whereas the elp-Bi (c) contains much larger, irregularly shaped grains. The grain size was measured using high-energy x-ray diffraction (XRD) performed at the X-ray Science Division 1-ID-E beamline of the APS, which is an Office of Science user facility at Argonne. The resulting diffraction patterns are shown in the insets of Figs. 1b and 1c. While these diffraction patterns are both dominated by the same monoclinic crystal structure of Bi, substantial differences in the patterns, such as intense spots observed only in elp-Bi, reflect differences in grain size and shape. The grains sizes were measured to be 30 nm in evap-Bi and over 700 nm in elp-Bi.

This order-of-magnitude difference in grain size is the key the researchers needed to explain the LE tail. LE tail indicates that not all of the x-ray energy absorbed by the Bi film is registered by the TES. Additionally, the percentage of the total signal observed in the LE tail was found to be proportional to x-ray energy.  Several energy-loss mechanisms were eliminated by the researchers as either being inconsistent with this energy dependence or unlikely in this TES architecture. But the smaller, and therefore more numerous, grains of evap-Bi present a new loss mechanism: the trapping of heat carriers at grain boundaries.

After absorption and thermalization of an x-ray, its energy is carried to the TES as heat. But in evap-Bi, heat transfer within the Bi layer itself is hindered significantly by smaller grains. The dependence of LE tail signal on x-ray energy is consistent with this loss mechanism; higher energy x-rays create larger secondary electron clouds, which would interact with more grain boundaries, result in more loss and bigger LE tails. Furthermore, electronic measurements show that elp-Bi is a semimetal but evap-Bi is a semiconductor, supporting the idea that more trapping occurs in evap-Bi.

With the LE tail eliminated, weak signals in x-ray spectra are more likely to be resolved with simple Gaussian fits. TES devices with electroplated bismuth will have lower detection levels and be better able to identify elements and chemical states within highly complex mixtures. This development, when combined with advances in the nanofocusing capabilities of the upgraded APS, will prove to be especially exciting for chemical state mapping of complex materials at the nanoscale.  — Amanda Grennell