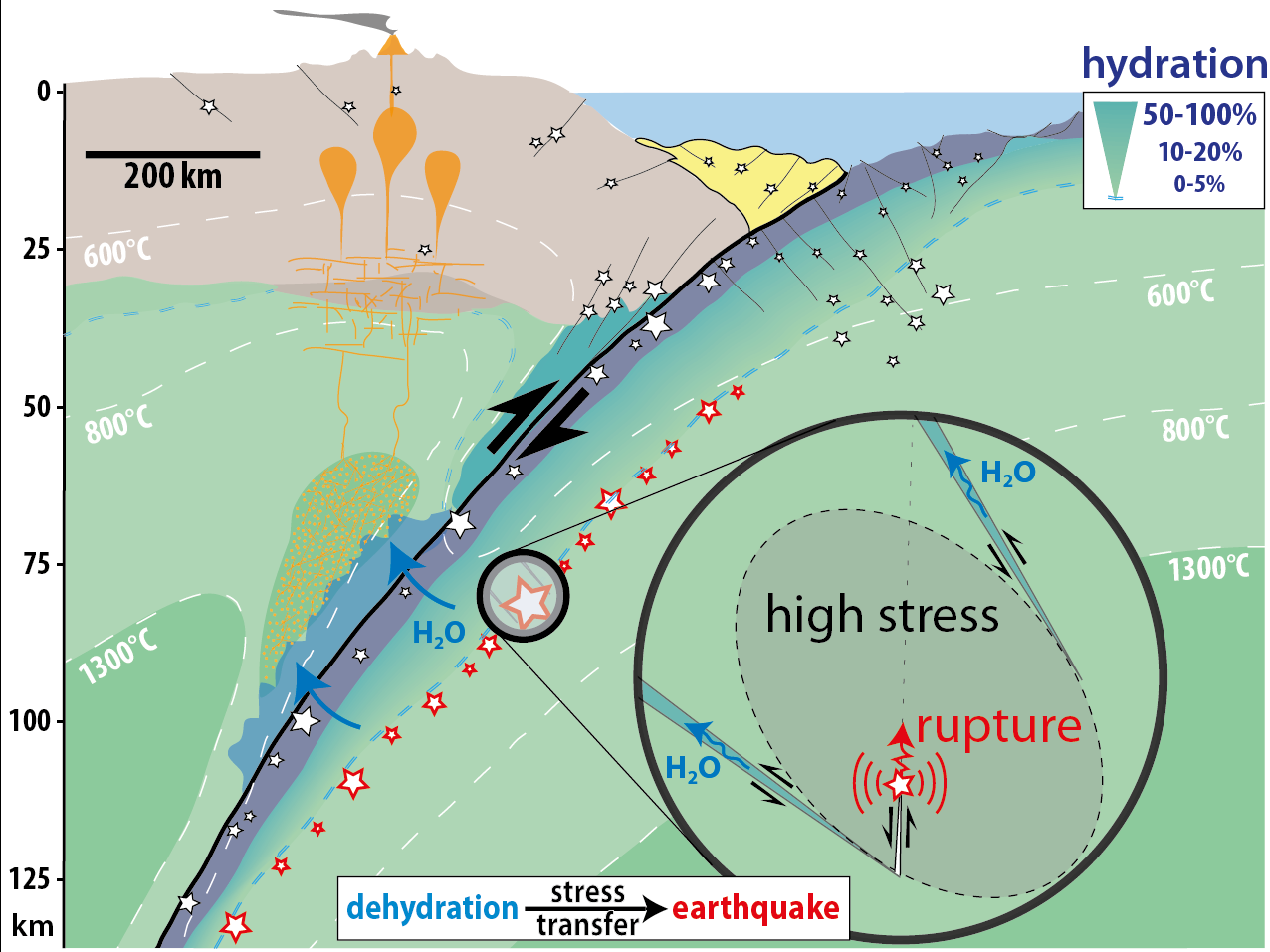 Many earthquakes occur under the ocean at subduction zones, where two lithospheric plates meet and one is forced to sink beneath the other. Some of these quakes occur many kilometers below the surface, in rock that is assumed to be too “soft” to allow fracturing. To help explain the existence of these intermediate-depth earthquakes, a new study has placed rock samples under high pressure and high temperature, mimicking the relevant geological conditions. With synchrotron light from the U.S. Department of Energy’s Advanced Photon Source (APS), a team of researchers tracked the stress and mineralogical transformations within the rocks. Their observations revealed that rock fracturing occurred as water was “squeezed” out of the rock. The connection to dehydration suggests that intermediate-depth earthquakes arise due to a sudden transfer of stress between different types of minerals in the rock.

Roughly two-thirds of earthquakes occur within a few tens of kilometers of the Earth’s surface. These shallow quakes arise when brittle slabs of rock undergo a critical mechanical stress. At this frictional limit, a rupture nucleates, and sliding occurs along a fault surface. However, this mechanism cannot explain the other third of earthquakes that erupt at deeper levels, where the pressure goes above 1 gigapascal (roughly 10,000 atmospheres). Under these conditions, the rock is no longer thought to be brittle, so some other process must be causing the rock structures to fail.

Different theories have been put forth to explain deep earthquakes. One hypothesis places the blame on water in the rocks. At a subduction zone, water is dragged down with the lithosphere, allowing the formation of hydrous (water-carrying) minerals. But as the lithosphere is pulled down deeper, the pressure and temperature become high enough for dehydration reactions that remove water from the water-carrying minerals. This released fluid would presumably generate extra pressure that could crack the rock. However, previous experiments have not shown a connection between dehydration and seismic activity.

The new experiment by researchers from Ecole Normale Supérieure (PSL Research University, France), Université de Lille (France), Université Pierre et Marie Curie (France), Ruhr Universität Bochum (Germany), The University of Chicago, and the University of California, Riverside, takes a different approach to dehydration and its role in earthquake triggering. As opposed to previous work, the team looked at samples composed of both hydrous and non-hydrous minerals. In particular, the studied mixtures of olivine and antigorite. Olivine is a magnesium iron silicate that constitutes most of the upper mantle, while antigorite is the most common hydrous phase in subduction zones. As described in their Nature Communications paper, the researchers synthetically formed different samples with varying concentrations of antigorite relative to olivine.

To study dehydration effects, the team placed each sample in a multi-anvil apparatus at the GeoSoilEnviroCARS 13-BM-D x-ray beamline at APS. (The APS is an Office of Science user facility at Argonne National Laboratory.) At fixed pressures of 1 and 3.5 gigapascals, the team raised the temperature from roughly 700 Kelvin to over 1000 Kelvin, while measuring both the x-ray diffraction and the acoustic activity from the samples. The diffraction data offered a measure of the internal stress, as well as the mineralogical composition. The acoustic emissions, on the other hand, were signatures of sudden rock deformations, which correspond to dynamic ruptures that resemble “micro-earthquakes” within the samples.

The x-ray diffraction measurements revealed that the antigorite underwent dehydration reactions starting at around 873 Kelvin. Depending on the antigorite concentration, this temperature also coincided with several acoustic emissions, implying a connection between dehydration and earthquakes. However, the researchers showed that the underlying cause is not fluid overpressure, as previous models suggested. Instead, the team formulated a new model in which subduction zone rock contains clusters of both olivine and antigorite grains that “share” the high-pressure load, like multiple columns supporting a heavy ceiling. When the antigorite dehydrates, it becomes soft, meaning its load suddenly shifts to the olivine columns. This stress transfer causes the olivine framework to fracture in multiple spots as a chain reaction.

The stress transfer model suggests that earthquakes only occur where the concentration of antigorite is within a specific range. In this sense, the antigorite is like the trigger to an elastically-loaded olivine “bomb.” Too little antigorite, and the olivine doesn’t “ignite.” Too much antigorite, and the olivine “explosion” is too weak. The researchers are currently validating their stress transfer model using real-world seismic data.  — Michael Schirber

This research was funded by L’Agence Nationale de la Recherche (project ‘DELF’ ANR12-JS06-0003 to A.S.), the LABoratoire d’EXcellence MATISSE (UPMC—Sorbonne Universités). GeoSoilEnviroCARS is supported by the National Science Foundation–Earth Sciences (EAR-1128799) and U.S. Department of Energy (DOE)–Geosciences (DE-FG02-94ER14466). This research used resources of the Advanced Photon Source, a U.S. DOE Office of Science User Facility operated for the DOE Office of Science by Argonne National Laboratory under Contract No. DE-AC02-06CH11357.