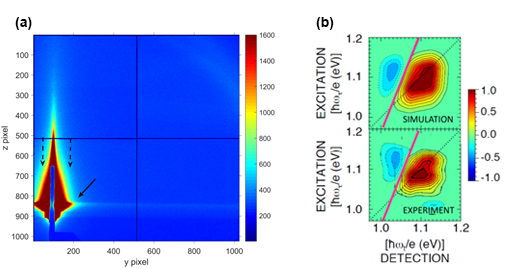 For instance, due to their size-tunable optical and electronic properties, quantum-confined semiconductor nanocrystals have shown great potential in many emerging optoelectronic applications including light-emitting diodes, lasers, solar cells, and photodetectors. However, these and other applications require very stringent control over the line width of the first exciton (electron-hole) transition of the QDs.

Initial attempts to compare the absorption bandgap inhomogeneity of the QDs obtained from 2-D spectroscopy to the value calculated from the size and shape distribution of the QDs led to inconsistencies when standard methods based on transmission electron microscopy (TEM) were used to determine the sizes and shapes. The researchers from the University of Colorado, Boulder, and Argonne National Laboratory resolved the conflicts in part by using new 2-D histograms that correlate major and minor TEM image projections, revealing the elongated structure of the nanocrystals, a result that was supported by measurements using high-resolution TEM and grazing incidence small-angle x-ray scattering (GISAXS), the latter at X-ray Science Division beamline 12-ID-C of the APS, an Office of Science user facility at Argonne. Because the bandgap inhomogeneity calculated from the size and shape distribution didn’t include impacts from surface effects, but that measured from 2-D spectroscopy did, the comparison revealed that no more than ~41-meV of the broadening came from surface contributions.

In 2-D spectroscopy, a sample is excited by light, and transient changes in its spectrum are measured as a function of two frequency dimensions. These 2-D spectra have positive signals from reduced ground state absorption, positive signals from excited state stimulated emission, and negative signals from excited state absorption. The researchers showed that the absorption bandgap inhomogeneity of the ensemble was robustly determined by the slope of the nodal line separating the positive and negative peaks in the 2-D spectrum around the bandgap transition (Fig. 1b). That is, it was shown that the slope of the nodal line provides a robust, single-parameter determination of the absorption bandgap inhomogeneity for the entire quantum dot ensemble, which was shown to reveal the dynamic absorption line shape as well.

This was the first application of 2-D spectroscopy to the determination of nanoparticle size distributions. Since the 2-D spectra indicated a new analysis of TEM images was needed, the researchers wanted to connect to an established determination of nanoparticle size and shape. Like 2-D spectroscopy, GISAXS would also probe more of the ensemble than the thousands of nanoparticles that could be analyzed by TEM. Using the GISAXS technique, a large area (100-mm × 0.55-mm strip) of the sample surface with many millions of nanoparticles could be probed. The GISAXS technique has the advantage of determining both the lateral size and the height of the nanoparticles. The analysis of the 2-D GISAXS images, as shown in Fig. 1a, revealed prolate particles with axes 4.4 nm and 3.4 nm long (within an accuracy of ± 0.2 nm), lying on the surface along their longer axis and validated the new TEM analysis techniques.  — Vic Comello

The work of S.D.P., D.B., J.R., B.C., and D.M.J. was supported by the U.S. Department of Energy (DOE) Oﬃce of Science-Basic Energy Sciences, Division of Chemical Sciences, Geosciences, and Biosciences, under Award Number DE-FG02-07ER15912. A.H. and S.V. acknowledge the support by DOE-Basic Energy Sciences, Materials Science and Engineering, under Contract DE-AC02-06CH11357 with UChicago Argonne, LLC, the operator of Argonne National Laboratory. This research used resources of the Advanced Photon Source, a U.S. DOE Oﬃce of Science User Facility operated for the DOE Oﬃce of Science by Argonne National Laboratory under Contract No. DE-AC02-06CH11357.