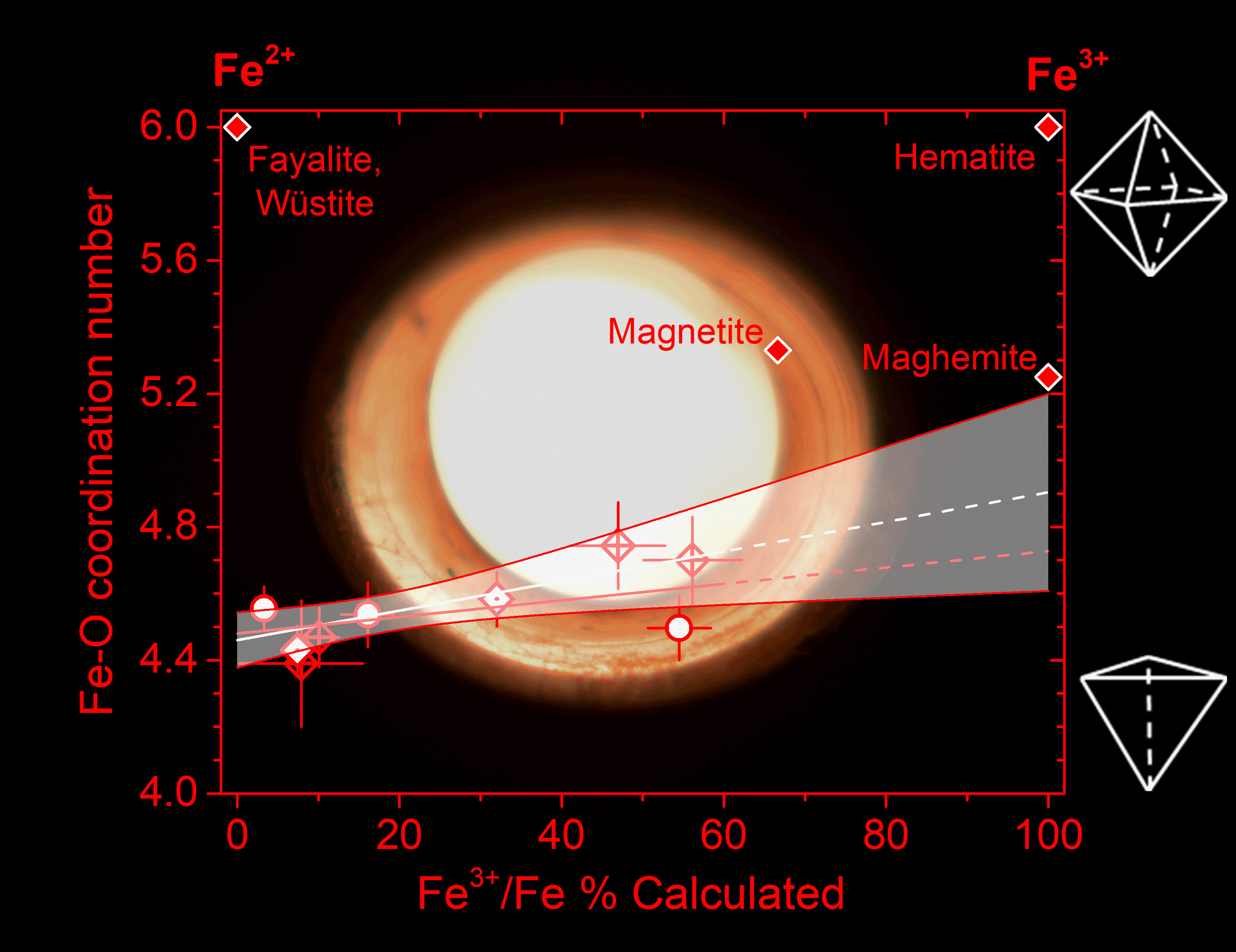 The behavior of iron at high temperatures and pressures plays an important part in our understanding of Earth's interior. Scientists must quantify how iron's physical and chemical characteristics are both affected by and affect the environment within Earth's mantle and core to make sense of the reactions which molten, subsurface magmas undergo. Researchers using high-brightness x-rays at the U.S. Department of Energy’s Advanced Photon Source (APS) at Argonne National Laboratory monitored the behavior of a model iron silicate melt to investigate how its structure and oxidation state change as a function of the amount of oxygen present. These new results — using melts based on fayalite (Fe2SiO4), the iron-rich end-member of the olivine solid-solution series — reveal contrasting behavior between this melt and more silicic magmas, including basaltic melts. They show that the iron in the iron-rich melt bonds differently with oxygen ions than in its crystalline counterparts. Additionally, they show that iron-rich melts may not retain their oxidation state during rapid cooling.

The multinational team of researchers from Materials Development, Inc., Argonne, Stony Brook University, University College London, and the University of Tennessee Space Institute, investigated the structure of molten fayalite as a function of temperature and oxygen fugacity. Oxygen fugacity is effectively a measure of the amount of oxygen present in the surrounding gas. The team chose fayalite because it is a volcanic mineral whose relatively simple melt structure can be characterized using x-ray diffraction. The iron in fayalitic melts can take multiple oxidation states, depending on its environment, and can bond with varying amounts of oxygen ions. The team found that lowering the oxygen fugacity of the environment caused a change in the oxidation state of the iron cations, increasing the numbers of Fe2+ ions and decreasing the numbers of Fe3+ ions.

The team used a combination of techniques to measure the number of oxygen ions bonded to the iron cations in the fayalitic melts (the number of bonded oxygen ions per iron cation is called the "coordination number"). To make these measurements, they placed the melt samples inside an aerodynamic levitation furnace and heated the samples using a CO2 laser. Aerodynamic levitation utilizes gas pressure to suspend materials for measurements in a manner that removes issues of sample contamination. To monitor the structure, the team used high-energy x-ray diffraction at the X-ray Science Division (XSD) 6-ID-D beamline at the APS, and iron K-edge x-ray absorption near-edge structure (XANES) spectroscopy at the XSD 20-BM-B beamline (the APS is an Office of Science user facility). Figure 1 shows a graph plotting the average coordination number as a function of the iron oxidation state. (The background of Fig. 1 shows a levitating melt droplet. See the caption for additional details.) Also, Fig. 1 plots the coordination number for common iron oxide mantle minerals, many of which are minerals that result when the fayalitic melt cools and crystallizes. The graph indicates the coordination number of the cooled and crystallized minerals are all larger than the measurements made by the team for the fayalitic melts.

Based on these measurements — showing a slightly lower coordination number for Fe2+ than Fe3+ — the team concluded that Fe2+ is less efficient than alkali cations at stabilizing the tetrahedral form of Fe3+. Furthermore, the team concluded that the combined effect of oxidation state change and small coordination number change is unlikely to strongly affect dynamic properties such as the liquid viscosity, in contrast to what occurs with alkali-rich silicate melts. The iron-rich melts therefore remain fluid over a wide range of oxidation states, temperatures, and pressures. As such, they will tend to accelerate composition changes of magmas as well as crystallization into intrusive rock formations.

By comparing results from XANES and Mössbauer spectroscopies, the team concluded that oxidation state is not always preserved in iron-rich melts during rapid cooling, unlike what happens with basaltic and more silicic magmas. This lack of preservation of oxidation state adds an additional level of difficulty when inferring the oxygen fugacity of a melt’s source in the case of ancient rocks derived from hot, fluid melts, such as the komatiites produced between 4 to 2.5 billion years ago. In addition to the geochemical results, the team's experimental setup demonstrated the power of combining multiple techniques — specifically the x-ray diffraction and XANES spectroscopy used in conjunction with the laser-heated aerodynamic levitation — to probe more subtle details of the structure-oxidation state relationship in high temperature melts than have previously been measured.  — Mary Alexandra Agner