Unravelling the Mystery of Nanoparticle-Reinforced Polymers 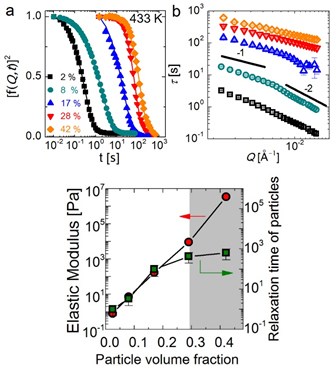 A transformative discovery was that the addition of nano-sized particles can mechanically reinforce a polymeric matrix. The resulting flexible composite forms a lightweight, yet strong material that is of considerable commercial interest. Examples over the last century include the clay-reinforced resin used in common household goods (“bakelite”), nanoparticle-toughened rubber for automobiles, and mica-reinforced nylon with a five-fold increase in yield and tensile strength. The growing availability of nanoparticles with precise size and shape and properties, combined with the development of high-resolution characterization techniques, has spurred even greater interest in nanoparticle-polymer composites, which have potential applications in aerospace, defense, transportation, biomaterials, and energy storage and conversion. A team of researchers exploited the power of the U.S. Department of Energy’s (DOE’s) Advanced Photon Source (APS) as a means of tracking, for the first time, the motion of a high concentration of silica nanoparticles in polymer melts relevant to commercial polymer nanocomposite applications. Motion of nanoparticles in polymeric melts has so far been investigated only in the dilute nanoparticle regime due to the challenges in dispersing nanoparticles in polymer melts at high volume fractions and the sensitivity of the particle dynamics to the morphology of the resulting aggregates.

At present, development of polymer melt materials is hampered by a lack of understanding of the reinforcement mechanism, which is much debated. Most of the previously proposed reinforcement mechanisms focus on polymer mobility in the presence of nanoparticles. However, since the reinforcement is a combined effect of polymer, particle, and the interphases in between, understanding how particle motion is affected as the nanocomposite gets stronger is equally important.

To begin, the team of researchers from the National Institute of Standards and Technology, the University of Maryland, and Argonne National Laboratory took advantage of the favorable interaction between polymer and nanoparticles to prepare a uniform dispersion of silica nanoparticles in a polyethylene oxide melt with a particle volume fraction up to 42%. In preparing this material, they dissolved the polyethylene oxide in acetonitrile solvent and added silica nanoparticles into the polymer solution. The mixtures were then sonicated and vigorously stirred. Finally, the samples were dried under a fume hood, annealed above the melting temperature of the polymer for solvent removal, and molded to sizes of 1-mm diameter and 0.8-mm thickness. The resulting composite samples had particle volume fractions of 2.5% to 42%. Using x-ray photon correlation spectroscopy (XPCS) at X-ray Science Division beamline 8-ID-I of the APS, an Office of Science user facility, the team was able to follow the slow nanoscale motion of the nanoparticles (“relaxation”) in the polymer composites over a length scale of 20-200 nanometers and time scale of 10 milliseconds to 2000 seconds.

At high concentrations, the nanoparticles served as both fillers for the resulting polymer nanocomposites and probes for the viscoelasticity of the surrounding polymer medium. The slow particle motion allowed the observation of reinforcement in the nanocomposites from the “eyes” of the nanoparticles. The results from XPCS as well as rheological measurements showed that the nanoparticles unexpectedly remain mobile at high concentrations whereas the elastic modulus of the composites increases by three orders of magnitude (Fig. 1c). Such decoupling of polymer and nanoparticle dynamics has not been reported before and should lead to new experiments and simulations with potentially novel findings. These results call for revising the current thinking on both the reinforcement mechanism in polymer nanocomposites and nanoparticle motion in reinforced polymers.  — Joseph E. Harmon