A New Approach to Treating Atherosclerosis 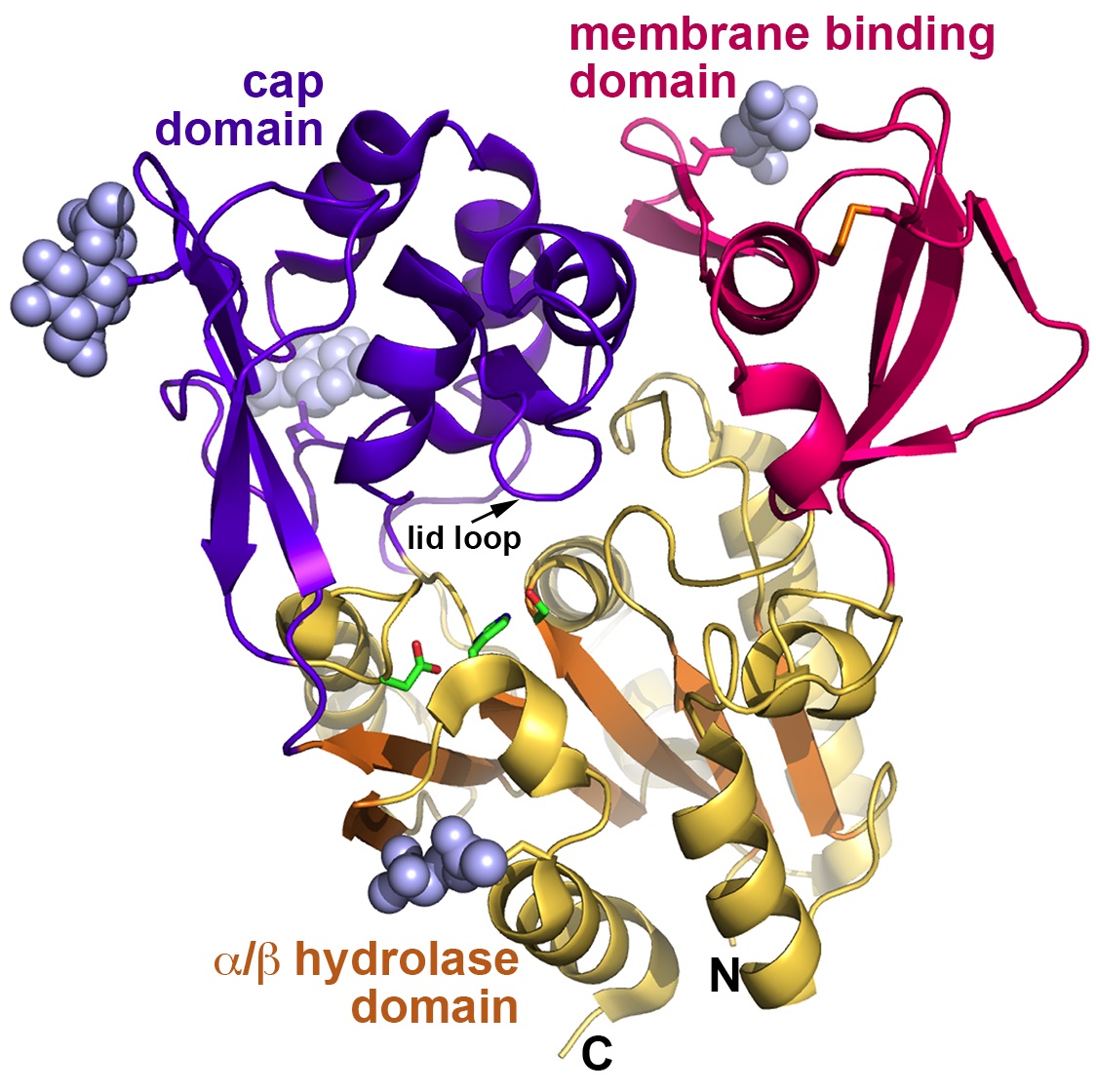 If you read the news, then you will know that fats are making a health comeback. There are now good lipids in addition to the customary bad lipids and, although recommendations concerning the role of lipids in our diet and in diseases like atherosclerosis may change over time, one thing is clear: lipids are important to health. Unfortunately, enzymes that mediate lipid metabolism in the human body are notoriously difficult to obtain structural information on, and thus, many have foiled our attempts to learn how they work. One such family of lipid metabolizing enzymes includes lysosomal phospholipase A2 (LPLA2) and lecithin:cholesterol acyltransferase (LCAT). These enzymes have been linked to certain drug toxicities, lupus, immune responses, and familial defects in cholesterol metabolism. Also, due to its activity in removing cholesterol from the bloodstream, LCAT is under investigation as a possible target for the treatment of atherosclerosis and acute coronary syndrome. Now, researchers working at the U.S. Department of Energy’s Advanced Photon Source (APS), an Office of Science user facility at Argonne, have finally uncovered some of the structural secrets of these enzymes, providing essential information that could guide the development of new disease treatments.

The researchers from the University of Michigan and Sapporo Medical University (Japan) utilized the National Institute of General Medical Sciences and National Cancer Institute (GM/CA-XSD) 23-ID-D x-ray beamlines at the APS to determine a high-resolution structure (1.8 Å) of LPLA2 and a low-resolution structure (8.7 Å) of LCAT. Even though the LCAT structure was low resolution, it allowed the team to confirm that the two proteins share domains and features, allowing them to extrapolate findings from LPLA2 to LCAT, which is the more likely therapeutic target at this time.

Overall, the enzymes are more closely related structurally to bacterial triacylglycerol lipases than to other PLA2 enzymes, and contain a six-stranded a/b-hydrolase domain featuring a catalytic triad, a membrane-binding domain, and a cap domain (Fig. 1). Some of the structures of LPLA2 solved by the team were inhibitor complexes which revealed that there are two hydrophobic “tracks” into the active site (Track A and Track B), consistent with the various shapes of the lipids that LPLA2 can act on.

Unlike its bacterial enzyme cousins, there is not yet evidence of a lid element that generates “open” and “closed” conformations to regulate substrate binding and access to the catalytic triad in LPLA2. The data from eight crystal forms analyzed for LPLA2 show that, although the enzyme has conformational flexibility that likely helps the enzyme accommodate different lipid substrates, there is no evidence for an element that would undergo such a large conformational transition. Instead, LPLA2 appears to be trapped in an “open” conformation and contains a small 10 amino acid “lid loop” present in both the LCAT and LPLA2 structures but that is not conserved in terms of its amino acids. This interesting difference led the team to hypothesize that this lid loop helps dictate whether the enzyme binds to slender substrates, as in LPLA2, or to a more bulky, cholesterol-like substrate, as in LCAT.

In support of this hypothesis are the facts that the lid loop is in close proximity to Track B, where substrate binding is expected to occur, and that the lid loop of LPLA2 presents a larger amino acid (arginine) than does LCAT (glycine). This substitution may discourage bulkier substrates from binding LPLA2. To test this hypothesis, the researchers mutated this arginine in the lid loop to glycine. However, it did not change the specificity of the enzyme leading the team to hypothesize that there are likely to be other contributing residues in the active site or other conformational states that dictate the molecular basis for substrate recognition in these enzymes.

Interestingly, modeling of the LCAT active site based on the LPLA2 structure showed why Cys31 is important for catalysis in LCAT. The backbone of this residues forms part of the so-called oxyanion hole, a key feature of enzymes that contain a catalytic triad. Mutation of Cys 31 is known to enhance catalytic activity of LCAT and is targeted by reactive small molecule activators that are under investigation for treatment of atherosclerosis and coronary heart disease.

The team hopes their success with these structures will allow them to obtain similar high-resolution snapshots of LCAT and make further discoveries to guide the design of therapeutics in diseases involving this important family of enzymes.

This work was supported by the US National Institutes of Health (NIH) grants HL086865 (J.J.G.T.) and AR056991 (J.A.S.), a Merit Review Award from the Department of Veterans Affairs (J.A.S.) and an American Heart Association Pre-Doctoral Fellowship 13PRE16880003 and Rackham Graduate Student Research Grant (A.G.). GM/CA-XSD is funded in whole or in part with Federal funds from the National Cancer Institute (ACB-12002) and the National Institute of General Medical Sciences (AGM-12006). This research used resources of the Advanced Photon Source, a U.S. Department of Energy (DOE) Office of Science User Facility operated for the DOE Office of Science by Argonne National Laboratory under Contract No. DE-AC02-06CH11357.