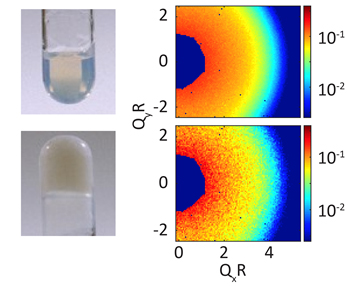 Knowledge about colloidal gel formation and dissolution has implications for understanding the preparation and stability of many consumer goods such as milk and yogurt, and personal care products such as cosmetics. At the same time, more fundamentally, colloidal gels exhibit physical behavior that can help address challenging scientific problems such as the formation, stability, and dynamics of glasses.  Studies by a research team utilizing high-brightness x-rays from the U.S. Department of Energy’s Advanced Photon Source (APS) provide important insight into a key question that has long puzzled scientists in the field, namely, why do nanoparticle gels take so long to form after a quench even though the constituent nanoparticles are rapidly diffusing through the suspension?

A gel is formed when particles suspended in solution become unstable to aggregation, ultimately forming a system spanning network that imparts mechanical rigidity to the system. The time required for this process can vary from a fraction of a second to many hours depending on the concentration of the particles and the strength of their attraction for one another. This sensitivity creates a scientific challenge that is central to the field of soft matter but also an opportunity for designing suspensions with properties tailored for specific applications, such as those noted above. The researchers studied this transformation from fluid to gel in aqueous suspensions of nanometer-scale silica particles. Taking advantage of newly developed x-ray scattering capabilities and the ability to precisely tune the strength of the particle attractions, the scientists were able to track the evolution in the microscopic organization and mobility of the particles and correlate these properties with the time-dependent macroscopic mechanical behavior of the suspensions. They found that the rate of gel formation is surprisingly sensitive to the strength of attraction, but that the suspensions proceed through identical intermediate states of microscopic and macroscopic behavior even as the time needed to form a gel varies by orders of magnitude. To explain these observations, they propose a model of gel formation in the regime of weak attraction in which network formation is a hierarchical process whose initiation depends on the creation and stability of small clusters in which the particles arrange in particularly favorable configurations.

The intermediate concentration gels that the researchers from Argonne National Laboratory, FAMU-FSU College of Engineering, AGH University of Science and Technology (Poland), and Johns Hopkins University chose to study are particularly intriguing because there remain many unanswered questions about the mechanisms by which such gels form from a suspension of rapidly diffusing constituent nanoparticles. The left panels of Fig. 1 are pictures of a colloidal nanoparticle suspension like the one the researchers studied. The upper left picture is the suspension in its fluid state while the lower left is it in its gelled state. The gelled suspension appears milky and does not fall out of the test tube because of the formation of a large-scale mechanically rigid structure in the gel.

For the reasons outlined above, gels have been studied for many years utilizing a variety of experimental techniques such as confocal microscopy and light, neutron, and x-ray scattering, as well as via simulation tools such as molecular dynamics. In particular, previous x-ray photon correlation (XPCS) studies performed at the APS [H. Guo et al., J. Chem. Phys. 135, 154903 (2011)], were able to examine slower formation and aging behavior of gels, but were unable to reveal how the colloids in suspension transitioned from a fluidized state at higher temperatures to an almost fully immobile state in the gel. XPCS measures fluctuating coherent scattering patterns to provide information about motion in materials at the nanoscale. To date, a key shortcoming of the technique has been limited detector speed that restricts the range of fluctuations that can be measured.

To address this shortcoming, the current experiment team worked closely with pixel-array x-ray detector developers at the AGH University of Science and Technology to commission and then deploy the world’s first XPCS-suitable (ultrafast, x-ray-photon-counting, pixel-array detector, or UFXC) area detector for measurements at the X-ray Science Division 8-ID-I beamline at the APS, which is an Office of Science user facility at Argonne. The detector is nearly ten times faster than any device available on the commercial market and provided the researchers with an unprecedented view of the early stages of gel formation.

To obtain information about the formation of the gel, the researchers started with the nanoparticle suspension at a higher temperature, when it is in its fluidized state, and then rapidly quenched it to temperatures at which a gel forms. The UFXC detector was then used to repeatedly measure “video clips” of the gel formation as a function of time after the quench to lower temperature was complete. The right panels of Fig. 1 show the time-average coherent scattering patterns measured just after (upper right) and well after (lower right) a quench. The upper-right pattern is smooth or blurred because the constituent nanoparticles were moving rapidly during the data collection period while the lower-right pattern is speckled or grainy, because the nanoparticles are now mostly frozen in position. 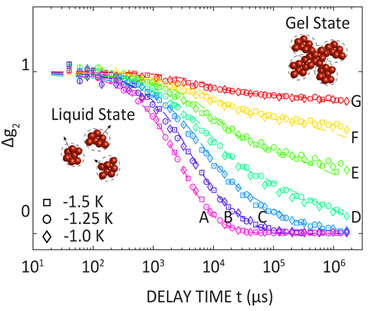 The coherent scattering patterns collected by the UFXC can be used to measure the dynamic properties (the so-called time autocorrelation decay functions) of the nanoparticle suspension as a function of time after it has been quenched into the gel-forming regime. Fig. 2 shows autocorrelation functions for three such quenches. Squares are the correlation points for a 1.5-K quench below the gel temperature while the circles and diamonds are for 1.25-K and 1.0-K quenches. The curve labelled A was obtained soonest after the quench, while that labelled G was obtained latest. The time scale of the decay from the maximum amplitude of the traces on the left to the minimum on the right provides a measure of how dynamic the nanoparticles are. Soon after the quench (A curves), the decay is rapid, indicating motion of small clusters of nanoparticles while long after the quench (G curves), the decay is incomplete indicating that the nanoparticle motion has largely been arrested and that the gel is nearly fully formed. The illustrations in the lower left and upper right of Fig. 2 are schematic illustrations of the microscopic state of the suspension at these two extremes of observed behavior.

The most intriguing part of the research performed by the team was the finding that the shapes that the correlation decays exhibit as the gel forms after the quench are identical irrespective of the quench temperature, i.e., each curve (A–G) is comprised of points from different quenches that lie atop one another. The only difference observed between the behavior of different quench temperatures was how long after the quench the scientists had to wait to observe an overlapping correlation function. For instance, curve D in Fig. 2 was measured 658 s after the quench to 1.5 K below the gel temperature (squares), while curve D was also measured after 1156 s and 1856 s, respectively, for 1.25-K and 1.0-K quenches. Similar observations were also made using a rheometer that measures the solid-like nature of the suspension and also by carefully examining the time-average scattering patterns like those presented in the right panels of Fig. 1.

This work suggests that gel formation occurs via the formation of highly favored small clusters of nanoparticles like those illustrated schematically in the lower left of Fig. 2, and via relatively slow diffusion; the clusters interact and form a space-spanning gel structure like that shown schematically in the upper right of Fig. 2. The work provides important insight into a key question that has long puzzled scientists in the field, namely, why do nanoparticle gels take so long to form after a quench even though the constituent nanoparticles are rapidly diffusing through the suspension? The UFXC detector provided the team with a unique opportunity to observe the early formation process of a gel and demonstrated that with the right tools, XPCS at markedly faster time scales will be possible with the dramatic gains in coherent flux that proposed APS Upgrade will provide.