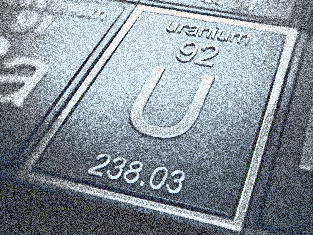 Actinides are a series of chemical elements that form the basis of nuclear fission technology, finding applications in strategic areas such as power generation, space exploration, diagnostics and medical treatments, and also in some special glass. Thorium (Th) and Uranium (U) are the most abundant actinides in the Earth's crust. A deeper understanding of the properties of uranium and other actinides is necessary not only for their more efficient use in existing applications but also for proposing new applications. Several open questions remain; progress in this area is usually limited in part by the difficulty in handling these materials safely. In an article published in the journal Nature Communications, a research collaboration between scientists from the Brazilian Center for Research in Energy and Materials, the University of Campinas (Brazil), Argonne National Laboratory, and Institut NÉEL (France) demonstrated that the use of x-ray magnetic circular dichroism (XMCD) in the L-absorption edge of uranium using relatively high energy x-rays (17 keV) can be used to investigate 5f and 6d orbitals, as well as their hybridization, directly and selectively. The studies were carried out at the Brazilian Synchrotron Light Laboratory (LNLS) and at the U.S. Department of Energy’s Advanced Photon Source (APS) at Argonne.

The distribution of electrons in the outer orbital of atoms that make up a given material is what defines whether they are electrical insulators, conductors, or semiconductors, as well as whether they are hard or malleable. Other structural, electronic and magnetic properties are also defined by these valence electrons which may undergo electronic hybridization with other orbitals. Such mixture of orbitals modifies material properties influencing oxidation states, the way bonding between atoms takes place, and hence the geometrical arrangement formed in crystals and molecules with actinide elements.

In the actinide elements, the 5f and 6d orbitals have the tendency to hybridize especially in atoms of this series that have a small number of electrons in the 5f orbitals, as is the case of Uranium. In compounds with this element, it is recognized that the degree of localization of electrons in the f-orbitals, affected by electronic hybridization, is a determining factor in their properties. However, experimental methods for direct and selective investigation of 5f state and their hybridization with other valence electronic states do not exist.

Ricardo Reis, an APS user and first author of this work, comments that “the ability to obtain this information is crucial for understanding a plethora of open questions in actinide compounds, which may promote an increase in the potential of applications of these materials."

This seems to be the first report of the high-energy XMCD technique being used to probe the electronic properties of compounds based on actinide elements. For this, it was necessary to overcome challenges of measuring small XMCD signals in addition to difficulties of manipulating these types of compounds.

Narcizo Souza Neto, a lead scientist at LNLS who initiated this research while doing postdoctoral work at APS in 2009 and expanded its scope at LNLS, commented that "the development of this new technique was carried out with the aim of opening new possibilities for the study of actinide materials by the scientific community.”

According to study co-author Daniel Haskel (Argonne), “The proposed APS Upgrade will be a game changer for these types of studies. The implementation of novel superconducting undulators will produce arbitrarily polarized x-rays directly at the source. Such devices will deliver a high degree of circular polarization at the L-edge resonances of actinide materials in the 17 keV-25 keV range. Such capability does not exist today. The reported L-edge measurements were done at a bending magnet beamline that produced an acceptable degree of circular polarization only by paying a high price in flux. To measure efficiently, and to extend these measurements to extreme condition environments such as high pressure, brilliant beams with a high degree of circular polarization are required, which will be delivered by the APS Upgrade.”