Gopal K. Shenoy, a Founder of the APS, Passed Away 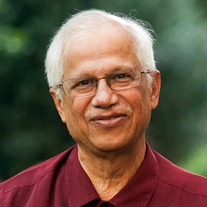 We are truly saddened to note the passing of Dr. Gopal K. Shenoy, world-renowned materials scientist, Argonne Distinguished Fellow, and a driving force, with the late Dr. Yanglai Cho, in bringing the Advanced Photon Source (APS) to Argonne. Throughout his long and illustrious career, Gopal had a profound and lasting impact on synchrotron x-ray science, both in his brilliant research, and in his central role in the creation and evolution of our marvelous APS. But beyond his scientific contributions, and throughout his professional life, Gopal touched many, many lives, as a mentor, as a colleague, and as a friend. Our deepest sympathies go out to Gopal’s wife, Ravibala, and his daughters Shami (Anand) and Lakshmi, as well as his grandchildren Maya and Anika.
An appreciation of Gopal follows.

Dr. Gopal K. Shenoy’s career Argonne National Laboratory started in 1967. Altogether he spent 43 years at the Laboratory.  During this time, he had a major impact, first as a bench scientist in the Mössbauer Spectroscopy Laboratory, then as a group leader for synchrotron radiation research in the Materials Science Division, then as a founding father of the current X-ray Science Division. He played a leading role in formulating the need for an advanced synchrotron radiation source for the nation, and then in raising Argonne’s capacity to compete for this light source, culminating in bringing the Advanced Photon Source (APS) to Argonne.

Gopal started his career at Argonne in the Solid State Science Division, working with M. Kalvius at the Mössbauer Laboratory. Together with Bobby Dunlap, who later became the Director of Materials Science Division, they carried out fundamental work on actinide and lanthanide chemistry and physics. Taking full advantage of reactor facilities at Argonne, they carried out pioneering work on magnetism and superconductivity in uranium, neptunium, ytterbium, gadolinium, erbium, europium compounds. At the time, Argonne’s reputation as the premier Mössbauer laboratory in the world was well established, which later on helped the Laboratory attract new generations of scientists to develop excellence in nuclear resonant scattering. Gopal was the first researcher to enter the 200+ club of the Mössbauer Effect Data Center. The impact of his studies is quite visible in the development of electronic structure of heavy fermions, ternary superconductors, Chevrel phase compounds, and high-performance magnets.

By the mid-1980’s Dr. Shenoy’s scientific interest moved to nanocluster physics. Together with Dr. Pedro Montano, and working with researchers from Fritz-Haber Institute, Gopal pioneered the use of EXAFS spectroscopy in studying the atomic arrangements in pure metal nanoclusters embedded in noble gas matrix. Their work on gold, silver, copper, and iron nanoclusters are still being extensively cited today. This work was coincident with the formation of the X-11 Participating Research Team at the National Synchrotron Light Source at Brookhaven National Laboratory, with Gopal leading the Argonne effort. Similarly, a soft-x-ray spectroscopy beamline was acquired at the Aladdin ring at the Synchrotron Research Center in Wisconsin, and J. C. Campuzano developed the pioneering ARPES experiments here.

With the work on EXAFS coinciding with the development of the Argonne Intense Pulsed Neutron Source, the time was right for Argonne to bid for a major scientific research facility. Shenoy seized on this historic opportunity and as early as 1982, he was in the forefront for pushing an insertion-device based synchrotron light source. He formed a research group in synchrotron radiation, and installed the most advanced computational codes at the time for undulator radiation. His enthusiasm was matched by that of Dr. Yanglai Cho, and working together, they came up with a low-emittance lattice storage ring design with extensive undulator sources. It was Shenoy, (together with James Viccaro) who demonstrated that 7 GeV would be the right energy for a single undulator to cover the entire energy range of interest in the x-ray regime. The entire synchrotron radiation community felt the intensity of his early work, such that 350 participants attended the first User Meeting for an unfunded, unnamed synchrotron source held at Argonne in 1986. This was a turning point for Argonne National Laboratory in its successful bid to build and operate the Advanced Photon Source.

During the 1990’s, Gopal’s attention, and that of Dr. David Moncton, the first Director of the APS, was given to completion of the construction of the APS, as well as to creating a healthy scientific user community, particularly in the Midwest. His intense effort led to the formation of Collaborative Access Teams, which provided additional funding for the construction of beamlines. Gopal, together with Dennis Mills, Deming Shu, and Tuncer Kuzay managed to create all the infrastructure needed for the design and construction of the experimental beamlines, and for addressing technologically challenging issues such as the handling of high-heat load from the intense x-ray beams.

Gopal played a major role in putting together the science case for Linac Coherent Light Source at Stanford, and remained actively involved in guiding the early scientific proposals. He served on many scientific advisory committees of major hard x-ray synchrotron radiation facilities in the world, including the Australian Synchrotron, the European Synchrotron Radiation Facility, the European XFEL, and SPring-8.

In the 2000’s, after leaving his position in the top management of the APS, Gopal turned his attention to novel experimental development issues. His never-changing enthusiasm led to first successful demonstration of a fast mechanical chopper in nuclear-resonant scattering studies. His work on MEMS–based cantilevers to manipulate the time-structure of light sources promises to be very useful in time-resolved studies at current and future light sources.

During his entire tenure at Argonne, Gopal Shenoy managed to have an eye on the future. As early as 1995, he was active in developing free-electron-based light sources. The first successful demonstration of the self-amplified spontaneous emission principle, a joint work with laboratory leaders such as Moncton, Efim Gluskin, John Galayda, Michael Borland, and Stephen Milton, paved the way for free-electron lasers in the world today.

Gopal Shenoy proved time and again that he could connect to young researchers, support their work, light their enthusiasm, challenge their ideas, and encourage them to publish their work.