Proteins May Prevent Dysfunction and Disease by Relaxing 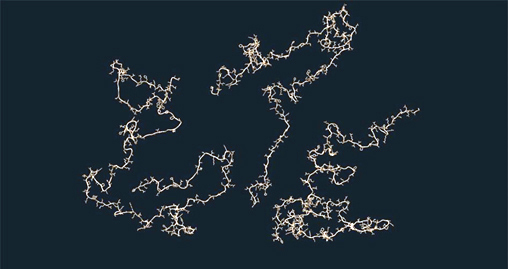 The original University of Chicago press release can be read here.

Determining how proteins function on a molecular level is crucial to understanding the underlying basis for disease. Now scientists using the U.S. Department of Energy’s Advanced Photon Source (APS) at Argonne National Laboratory are one step closer to unraveling the mystery of how intrinsically disordered proteins work, according to new research published in Science. The team used simulations and high-brightness x-rays to tackle the question. Their results conclude that these proteins remain unfolded and expanded as they float loose in the cytoplasm of a cell.

Researchers have struggled to understand precisely how disordered IDPs are — and how they work. Their floppy structures make it difficult to extract their exact dimensions, making the extent of that disorder, along with the strengths of the interactions, unclear. These details are crucial to understanding how IDPs carry out their necessary functions in cells.

Different methods have yielded different results. Scattering using x-rays suggested they remained expanded, but fluorescent methods observed the opposite behavior. The answer would affect how we envision the movement of a protein through its life—essential for understanding how proteins fold, what goes wrong during disorders and disease and how to model their behavior.

“We have excellent methods available for determining the structures of proteins that fold into one rigid structure, but a significant fraction of all proteins are too flexible to be studied using these methods. Even worse, results from two of the most commonly used methods to study IDPs disagree with each other,” said Patricia Clark, a biophysicist at Notre Dame and co-author of the study published in Science. “So we developed a novel analysis procedure to help resolve this.”

Clark worked with Tobin Sosnick, a professor at the University of Chicago, to develop a new small-angle x-ray scattering (SAXS) analysis method that showed most IDPs are more disordered than previously thought. SAXS is one of the two ways researchers extract dimensions of IDPs. In SAXS, proteins are placed in the path of an x-ray beam, scattering the x-rays in patterns that contain information on the protein’s size and shape.

“What we need to determine is how ‘sticky’ they are,” said co-author Sosnick. “For survival, you want a protein to “stick” only in the right conformation, and with the right other pieces or partners at the right times.” This stickiness is determined by the protein’s chemistry and physics.

Clark and Sosnick’s new approach analyzes a broader range of the x-ray scattering pattern than previous SAXS methods and fits these patterns to IDP structures with different degrees of disorder generated by computer simulations.

This discovery advances the discussion between researchers who use SAXS to study IDPs and those who use a different method, fluorescence resonance energy transfer (FRET).  With FRET, researchers attach molecules called fluorophores to the protein, then determine the size and shape of the IDP by calculating the distance between the fluorophores. In recent FRET studies, researchers have concluded that IDP parts interact more strongly with each other than with their surroundings, leading to more collapsed structures.

The results in this study, obtained by Clark, Sosnick, and their colleagues using APS high-brightness x-rays at the Biophysics Collaborative Access Team 18-ID beamline, shed new light on the controversy between the two research methods, Clark noted. (The APS is an Office of Science user facility.) Their SAXS analysis method shows that the floppy structures of IDPs are very close to what would be expected for a truly random structure — which might help prevent IDPs from accidentally interacting with other proteins.

Many diseases, including many forms of cancer, are caused by mutations that cause a protein to interact incorrectly with itself or other proteins, Clark said. The advancements made in this work will enable detailed study of folding and misfolding mechanisms. They also will assist with development of new strategies to prevent protein misfolding diseases.

“The results are very clear, but contradict the current consensus,” Sosnick said. “It’s possible that proteins can avoid unwanted interactions by being expanded.” This reduces the chances of them sticking to other proteins by accident, causing dysfunction or disease.

“While this work is a fundamental, basic research demonstration of protein behavior, the implications are really broad,” Clark said.