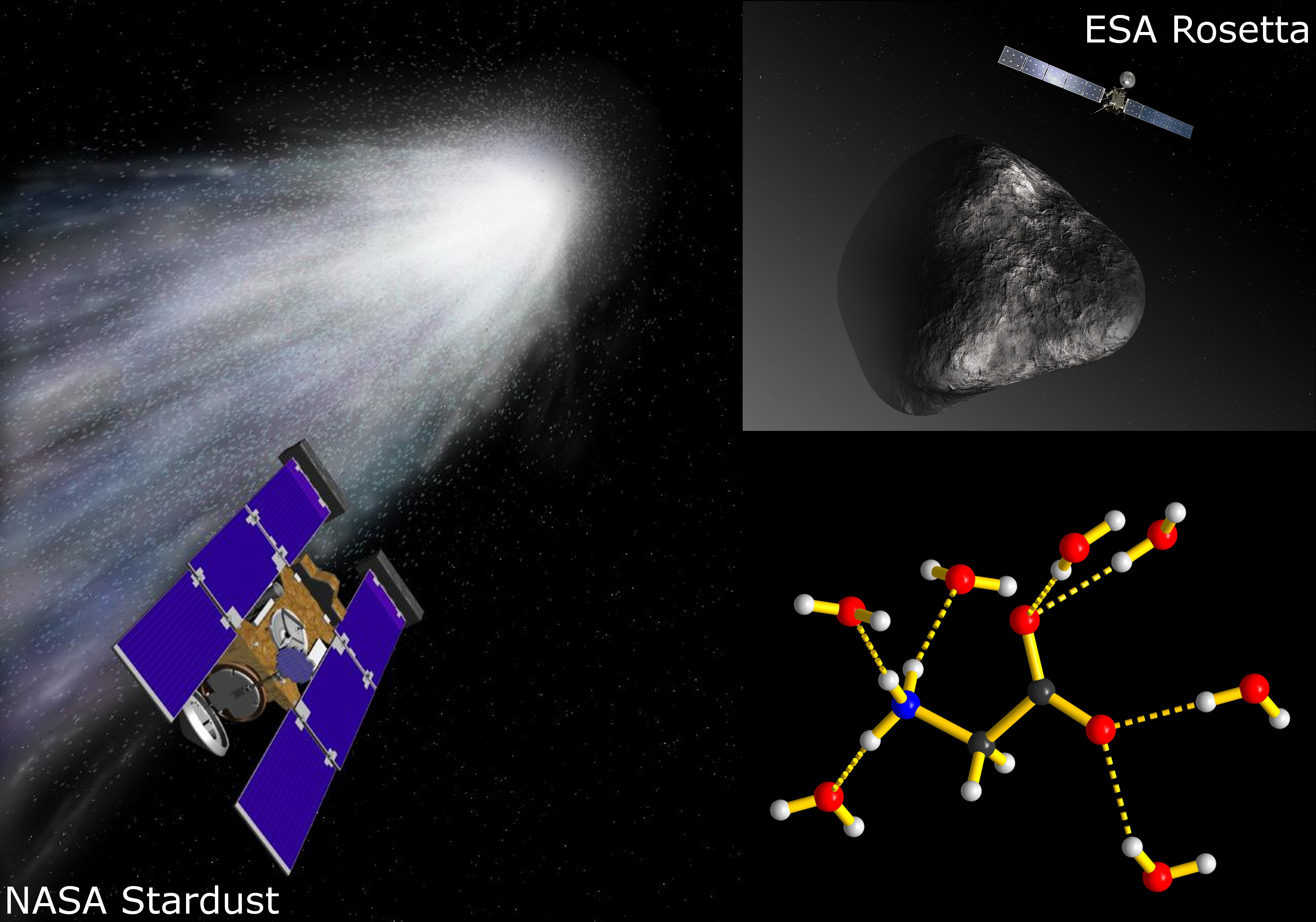 Of the many amino acids essential for life, glycine has both the fewest number of atoms and the greatest known number of polymorphs (unique structural forms). Although scientists have long recognized that glycine displays multiple polymorphs, the exact structure of several of these forms has remained a mystery. Now a research team has uncovered the precise molecular arrangement of one of these mysterious structural phases, which they have dubbed glycine dihydrate, or GDH. The researchers deduced the structure of GDH by applying computational analysis to powder x-ray diffraction measurements collected at the U.S. Department of Energy’s Advanced Photon Source (APS) at Argonne National Laboratory. These results constitute the first structural description of a hydrated (i.e., water-based) form of glycine. Deciphering the structure of GDH has important ramifications for understanding the behavior of glycine in water-based solutions, including how it crystallizes when frozen or when grown from solution. The discovery also benefits planetary science since glycine has been detected in comets and meteorites, and GDH is its most likely polymorph within these celestial bodies.

All amino acids have two molecules in common, the functional groups amine (-NH2) and carboxyl (-COOH). What differentiates one amino acid from another is the accompanying side chain. Glycine is considered the simplest amino acid since its side chain consists of just a single atom of hydrogen. The various polymorphs of glycine are due to variations in the three-dimensional arrangements of its molecules, which change according to temperature and pressure.

This research, by a team from Argonne National Laboratory, the University of Nevada Las Vegas, Stony Brook University, and New York University focuses on the most recently-discovered glycine phase, detected in 2001, which was observed at low temperatures in an aqueous solution frozen with liquid nitrogen. Though known to be distinct from other glycine forms, its exact structure was unknown. In 2012, a research group at Novosibirsk State University (Russia) investigated this polymorph (which they called the “X-phase”). Though the researchers collected x-ray powder diffraction data of the X-phase, they were unable to establish its precise structure.

The journey toward a complete structural description of the X-phase began with an alternative method of sample preparation. In previous experiments, a glycine-bearing solution was rapidly cooled either by pouring it over a frigid surface or into liquid nitrogen. For the current research, an alternative technique called flash cooling was used: An aqueous solution containing glycine was encapsulated in a tiny glass capillary (0.7 millimeter in diameter) that was suddenly exposed to a stream of liquid nitrogen. This technique instantly froze the glycine/water mixture, transforming it from a transparent liquid to a cloudy solid.

High-resolution x-ray measurements, gathered at X-ray Science Division beamline 17-BM-B of the APS, an Office of Science user facility, provided the necessary experimental data for determining the X-phase structure. A solution containing 20% glycine was frozen via flash cooling at a temperature of 173 K (-100° C). The x-ray measurements indicated only the presence of water ice at this temperature. As the sample temperature was raised to 208 K (-65° C), x-ray data indicated the emergence of glycine's X-phase.

The entire x-ray data set was subsequently analyzed using sophisticated computational software such as USPEX. The analysis indicated that the X-phase is a hydrated form of glycine (now called glycine dihydrate), existing as a co-crystal of water and glycine connected via intermolecular hydrogen bonding. The lower-right inset in Fig. 1 shows how each glycine molecule forms hydrogen bonds with seven peripheral water molecules. This arrangement effectively isolates the glycine molecules from one another, allowing little interaction between them. Although other amino acids have hydrated polymorphs, only glycine dihydrate exhibits such negligible interaction between its neighboring amino acid molecules.

The left side of Fig. 1 pays homage to NASA's Stardust mission that returned a cometary dust sample gathered near comet Wild 2, marking the first direct confirmation of glycine in outer space. The Rosetta mission to comet 67P (upper-right inset) also detected glycine. Evidence is accumulating that the essential ingredients of life, including water and glycine, were transported to Earth via comets and asteroids. Given the frigid conditions of these celestial bodies, GDH is the most likely structural phase of any glycine present. In more general terms, deciphering glycine's hydrated phase is important for understanding the phase evolution and stability of this key amino acid. — Philip Koth

Work at UNLV is supported by the National Nuclear Security Administration under the Stewardship Science Academic Alliances program through the U.S. Department of Energy (DOE) Cooperative Agreement DE-NA0001982. Work at NYU is supported by the Materials Research Science and Engineering Center (MRSEC) program of the National Science Foundation (NSF) under Awards Number DMR-0820341 and DMR-1420073. Calculations were performed on XSEDE facilities and on the cluster of the Center for Functional Nanomaterials, Brookhaven National Laboratory under Contract No. DE-AC02-98CH10086 supported by the U.S. Department of Energy (DOE)-Basic Energy Sciences. This research used resources of the Advanced Photon Source, a U.S. DOE Office of Science User Facility operated for the DOE Office of Science by Argonne National Laboratory under Contract No. DE-AC02-06CH11357.