Improving the Braids that Bind Uranium from Seawater 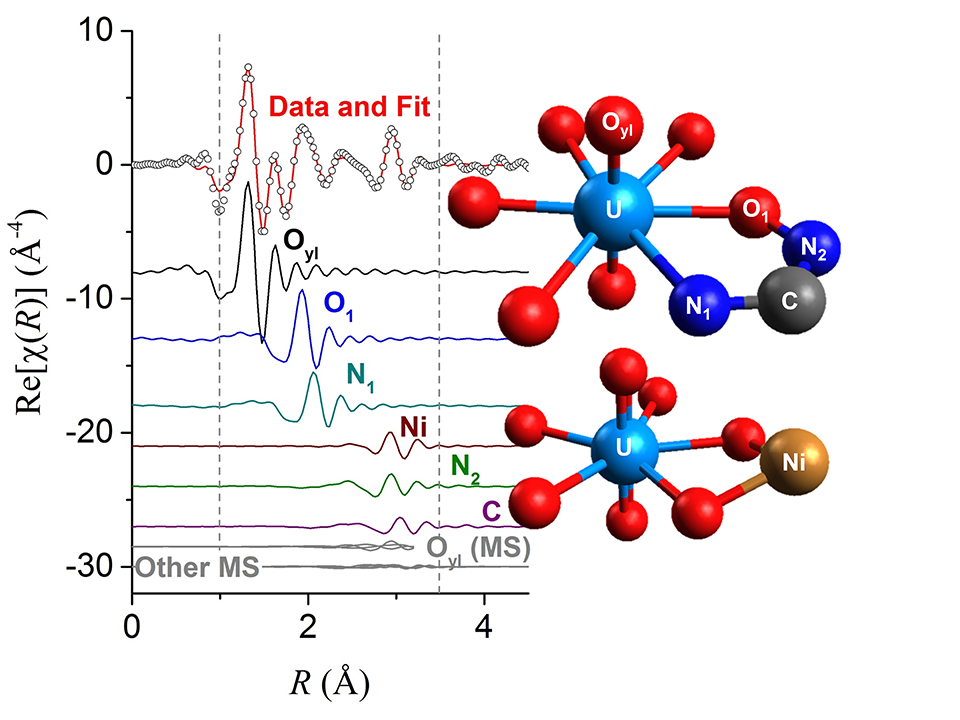 Nuclear power is one of the best ways currently available to supply clean, baseload electric power to the U.S. over the long term. But reserves of good uranium ore to fuel those plants are diminishing. By 2100 there will not be enough recoverable uranium left in terrestrial mines to meet the demands of existing power plants. However, if we cannot mine uranium on land, we may be able to sift it from the sea: The oceans contain huge reserves of uranium dissolved in seawater. State-of-the-art polymer fabrics soaked in seawater can recover 7 to 8 grams of uranium over a span of 30 days. Researchers trying to improve that fabric used the U.S. Department of Energy’s Advanced Photon Source (APS), an Office of Science user facility at Argonne National Laboratory, to inspect how uranium binds to the polymer at the molecular level. The results were surprisingly different than what scientists thought was going on, and open new possibilities for improving uranium recovery.

The polymer fabric’s uranium catcher is a molecule called amidoxime. Amidoxime finds and binds uranium, sucking it out of seawater even at the extremely dilute concentration of 3.3 parts per billion that are normal in the open ocean. Researchers understood how amidoxime works when it is just a small molecule, but they did not know what happened when amidoxime molecules were integrated within a ropy, braided polymer fabric and exposed to ocean water. For example, other elements such as copper and vanadium may also be attracted by the binding sites. Unlike uranium, these other elements are important to ocean biology, and removing them from seawater could degrade the environment. In addition, they could occupy binding spots that would otherwise catch more uranium.

The team of researchers from The University of Chicago and Oak Ridge National Laboratory (ORNL) used x-ray absorption fine structure (XAFS) analysis at the Materials Research Collaborative Access Team 10-BM-B x-ray beamline at the APS, supplemented by pair distribution function (PDF) measurements obtained at X-ray Science Division beamline 11-ID-B, also at the APS, to get a better picture of what was happening. The research group chose the APS for the quality of its high-energy x-rays, and the 10-BM and 11-ID beamlines because of their excellent beamline scientists. Not only do these personnel have experience working with radiological materials and can measure at the energies the experiment requires, but they always make sure the optics and detectors are well configured and able to collect high-quality data, according to the lead investigator.

XAFS reveals the oxidation state and local atomic environment of uranium (or any number of other metals) by hitting the sample with x-rays that will only be absorbed by the element of interest.  The x-rays excite the electrons closest to the nucleus to higher energies, and the electrons then scatter off of adjacent atoms before returning to fill their original place.  This scattering subtly changes the amount of x-rays absorbed, creating a spectrum which hints as to what atoms surround the uranium.  As each element absorbs x-rays of different energies, XAFS can infer how different metals are bound on the same sample.  In contrast, PDF measurements investigate the distance between atoms by measuring the diffraction of the x-rays.  While not capable of discriminating between different elements, it is particularly useful for non-crystalline samples, such as the adsorbents investigated in this study. The group was able to use XAFS to analyze uranium bound to both amidoxime polymers and in small molecule amidoxime crystals.

The results surprised them. Something significantly different was happening in the seawater-soaked polymer. The uranium bound to the amidoxime polymer in a distinctive way, not the way it bound to the small molecule amidoxime. In fact, it looked as if another atom such as vanadium, copper, or nickel might be bonding to the polymer in a manner that changed the atomic arrangement of the uranium binding site.

When the team compared their experimental results to computational models for different uranium-amidoxime bonding configurations, the closest match to the experimental XAFS spectrum was higher in energy (and therefore previously unexpected, Fig. 1).  This led the scientists to propose that the structure of the polymer and its interaction with other metals in seawater dictates how the uranium is actually bound, rather than the chemical interactions that dominate with small molecules.  This is a fundamental shift in how researchers conceptualize the way metals and polymers interact.

The researchers must do further experiments to better understand how the polymer structure can be changed to enhance uranium binding. Their goal is to design a better polymer with more available spaces that are uniquely attractive to uranium, bringing uranium harvesting from the oceans closer to commercial reality.  — Kim Krieger