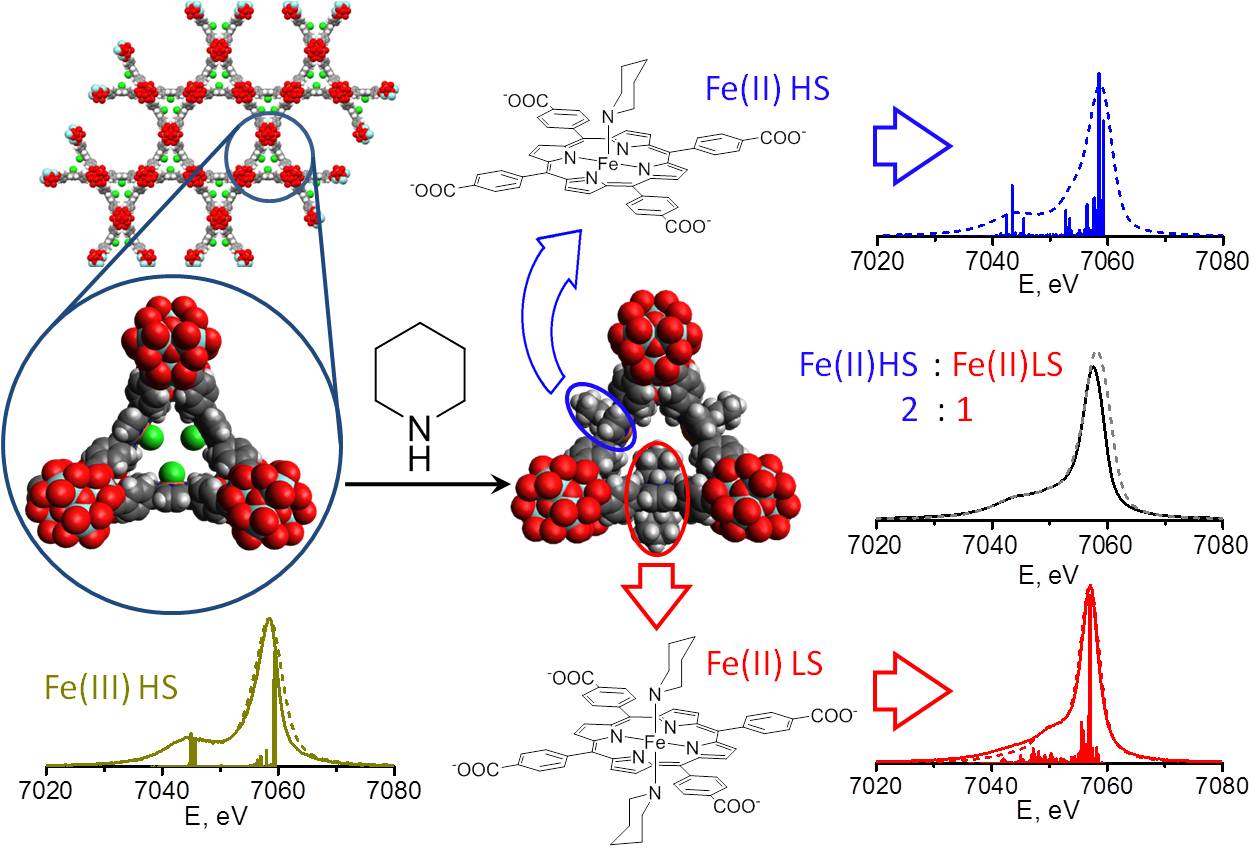 Taking a leaf out of nature's book has been a fruitful inspiration for scientists. Now, in a bid to make novel materials that might be useful for storing, separating, or reacting industrial and other gases, a way to make porous substances using a building block found in nature looks set to bear fruit. By using the porphyrin molecule at the heart of the respiration process in plants and animals, a new type of metal-organic framework (MOF) material can be constructed. The MOF is investigated by iron K-edge x-ray absorption and K-beta mainline emission spectroscopy measurements. Studies at the U.S. Department of Energy (DOE) Office of Science’s Advanced Photon Source (APS) show the detailed structure of the pores in this solid, but sponge-like material and points to how it might be used to absorb other small molecules for catalytic conversions to make useful chemicals or even for solar energy conversion.

Metal-organic frameworks are a relatively recent discovery. They are three-dimensional (3-D) materials formed from a network of metal ions interlinked by any of various organic compound molecules. The organic groups act as spacers that keep the metal ions apart and open up a regular pattern of structures within the solid. In many cases, this lattice contains holes and channels that are big enough to absorb small molecules. As such, materials scientists have been searching for new MOFs by combining different metal ions with various classes of organic compound to create new types of catalysts for speeding up otherwise inefficient or energy-intensive manufacturing processes for the chemical, pharmaceutical, and agrochemicals industries. Other MOFs might selectively absorb one type of chemical and so could be used to separate different compounds from one another, acting as molecular sieves. Yet other types of MOF might be used to store explosive gases in a safe environment or even sequester carbon dioxide and other pollutants from exhausts to reduce greenhouse gas emissions.

Fundamentally, the porous nature of these 3-D lattices endows those MOFs with a vast internal surface area relative to their overall volume, which gives them a significant advantage over many other types of storage material. Metal-organic surface areas can range from 1000 to 5000 square meters per gram of material. Unfortunately, many MOFs are too fragile for practical purposes and either break apart or collapse when heated or put under pressure or chemical stress. As such, scientists have endeavored to find alternative building blocks that can be used to construct robust and stable MOFs. One such building block using porphyrin molecules hooked to metal ions have recently been the focus of investigations. Natural magnesium porphyrins are essentially the active sites in the photosynthesis molecule chlorophyll, while iron porphyrin is the active site of hemoglobin, the protein in our red blood cells responsible for transporting oxygen in our bodies.

A MOF based on an iron-porphyrin building block and known as PCN-222(Fe) has been built and modified using a reduction reaction with the organic compound piperidine (Fig. 1). This system served as a model for intermediate species along relevant potential catalytic pathways. X-ray studies at X-ray Science Division (XSD) beamline 20-ID-B,C at the Argonne APS and Beamline 2-2 at the Stanford Synchrotron Radiation Light Source (both of which are Office of Science user facilities) together with UV−visible diffuse reflectance, infrared, and resonance Raman spectroscopy, show details of the internal geometry of this MOF.

The studies notably reveal the influence of pore size restrictions on the reactive state of the iron atoms within its porous structure. Choosing a particular chemical structure for the metalloporphyrin building blocks used to construct a MOF should allow researchers to adjust the size and shape of the pores that are produced in that material. The insights from this work will help others to determine what porphyrin characteristics they should use to make a MOF for given application, whether storage, separation or catalysis.

Intriguingly, PNC-222(Fe) itself contains two different types of channels, or pores. This means there are two types of binding sites for gas and other molecules that might diffuse into the MOF and become chemically attached to the interior surface. The analytical methods tested with this particular example MOF will be applicable to other MOFs with and without guest molecules held within the pores.

J.V.L. would like to acknowledge support by the National Science Foundation under Grant No. DMR-1455127. Use of the Stanford Synchrotron Radiation Lightsource, SLAC National Accelerator Laboratory, is supported by the U.S. Department of Energy (DOE) Office of Science-Basic Energy Sciences under Contract No. DE-AC02-76SF00515. APS Sector 20, which is managed by XSD in partnership with the Canadian Light Source (CLS), is funded by the U.S. DOE Office of Science, and by the Natural Sciences and Engineering Research Council of Canada and the University of Washington via the CLS. This research used resources of the Advanced Photon Source, a U.S. DOE Office of Science User Facility operated for the DOE Office of Science by Argonne National Laboratory under Contract No. DE-AC02-06CH11357.