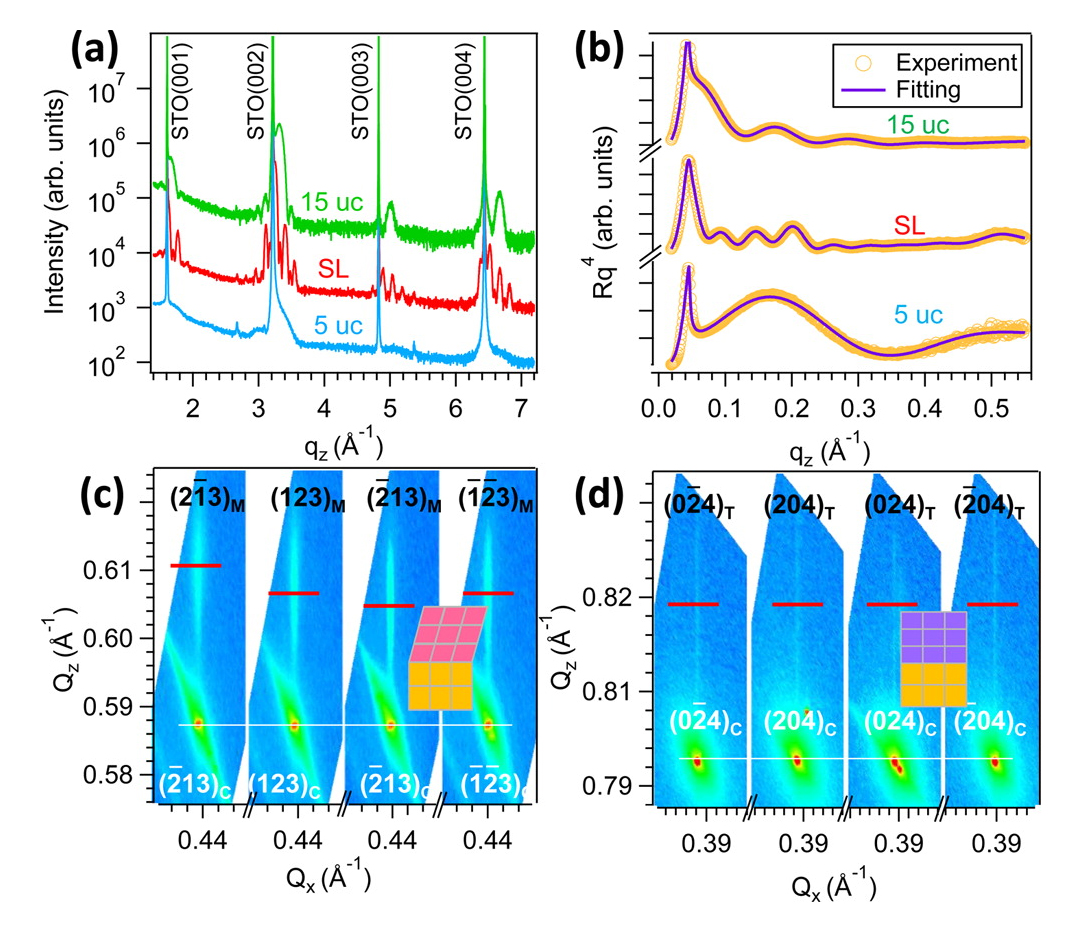 Thin films are ubiquitous in computer chips and other electronic devices. Researchers have recently begun tuning the properties of these films by growing them on substrates with different crystal structures. A particularly interesting case is the lanthanum-cobalt oxide, LaCoO3, or LCO for short. As a bulk crystal, LCO is not magnetic, but thin films of LCO grown on certain substrates exhibit ferromagnetic ordering. Previous attempts to explain this induced magnetism have been unable to incorporate the fact that the atomic arrangement, or crystal symmetry, of epitaxial LCO film is distinct from that of both its bulk phase and its substrates. This symmetry mismatch leads to additional structural distortions in LCO thin films, as observed in x-ray experiments performed at the U.S. Department of Energy’s Advanced Photon Source (APS) and elsewhere. The distortions—specifically volume changes in octahedral structures—provide a viable explanation for the appearance of magnetism in LCO. The work exemplifies the potential of using symmetry mismatch as a means of controlling the behavior of layered heterostructures.

When one material is grown on top of another, the crystal structures rarely ever match up perfectly. If the lattice spacing is different across the material boundary, then the atoms will shift position to provide a better fit. This so-called “film epitaxy” and the associated epitaxial strain can generate new electronic or magnetic properties in thin films. However, the lattice mismatch is just one type of discontinuity that can occur between a film and its substrate.

In the case of LCO, its bulk crystal symmetry is rhombohedral, whereas it often is grown on a substrate with different crystal structure. This symmetry mismatch can further alter the rotations and tilting patterns of subunits within the lattice structure, but such subtle distortions are difficult to observe. An international, multi-institution team of researchers from the U.S., the U.K., China, Australia, and France utilized sophisticated x-ray tools to uncover the symmetry mismatch effects in LCO thin films. The results appeared in the journal Nano Letters.

For their experiments, the team grew epitaxial LCO films on strontium titanate (SrTiO3 or STO), which has a cubic symmetry. They varied the thickness of the LCO layer to produce three distinct samples. The first sample had an ultrathin LCO film (5 unit cells of LCO lattice) on top of an STO substrate. The second had a thicker LCO film (15 unit cells) on STO. The last sample was a “superlattice” with alternating layers of ultrathin LCO and STO. The thicker film sample was the only one that exhibited a strong ferromagnetic transition. This by itself suggested that the magnetism does not arise merely from the epitaxial strain, which does not depend very much on the film thickness.

To uncover the underlying mechanism, the team utilized x-rays to probe the atomic rearrangements in the LCO films. Some of these lower-energy x-ray measurements were taken with a lab-based diffractometer at the Oak Ridge National Laboratory in Tennessee. But to obtain data with better quality and higher resolution, the team brought their samples to X-ray Science Division beamlines 11-ID-D and 12-ID-C,D at the Argonne APS, where the x-ray diffraction scans helped determine the precise positions of oxygen atoms in the crystal structures (Fig. 1).

Both LCO and STO have a so-called perovskite structure, in which the oxygen atoms form 6-atom subunits in the shape of octahedrons. In the thicker film sample, the LCO octahedrons were further rotated and distorted, producing a small increase in the volume contained by the octahedrons. These structural changes were confirmed with scanning transmission electron microscopy.

The researchers argue that the volume increase observed in the thicker LCO films affects the electronic structure, making it easier for some electrons to hop into higher spin configurations. Higher spin states have a greater propensity to align themselves in a ferromagnetic ordering. If the symmetry mismatch is the driver of magnetism in LCO, then it may be possible to choose an appropriate substrate or heterostructural design to further promote the magnetic effect in LCO. This would be especially interesting because LCO is an insulator, which makes it one of the few known ferromagnetic insulators. These rare materials are highly sought for spintronic applications.

H.Y.X. acknowledges the support of scientific research starting funding of Electronic Science and Technology of China (Grant Y02002010401085) and NSAF Joint Foundation of China (Grant U1330103). Z.X.F. and H.Z. were supported by the Joint Center for Energy Storage Research, an Energy Innovation Hub at Argonne National Laboratory funded by the Office of Science, U.S. Department of Energy. This research used resources of the Advanced Photon Source, a U.S. Department of Energy (DOE) Office of Science User Facility operated for the DOE Office of Science by Argonne National Laboratory under Contract No. DE-AC02-06CH11357.