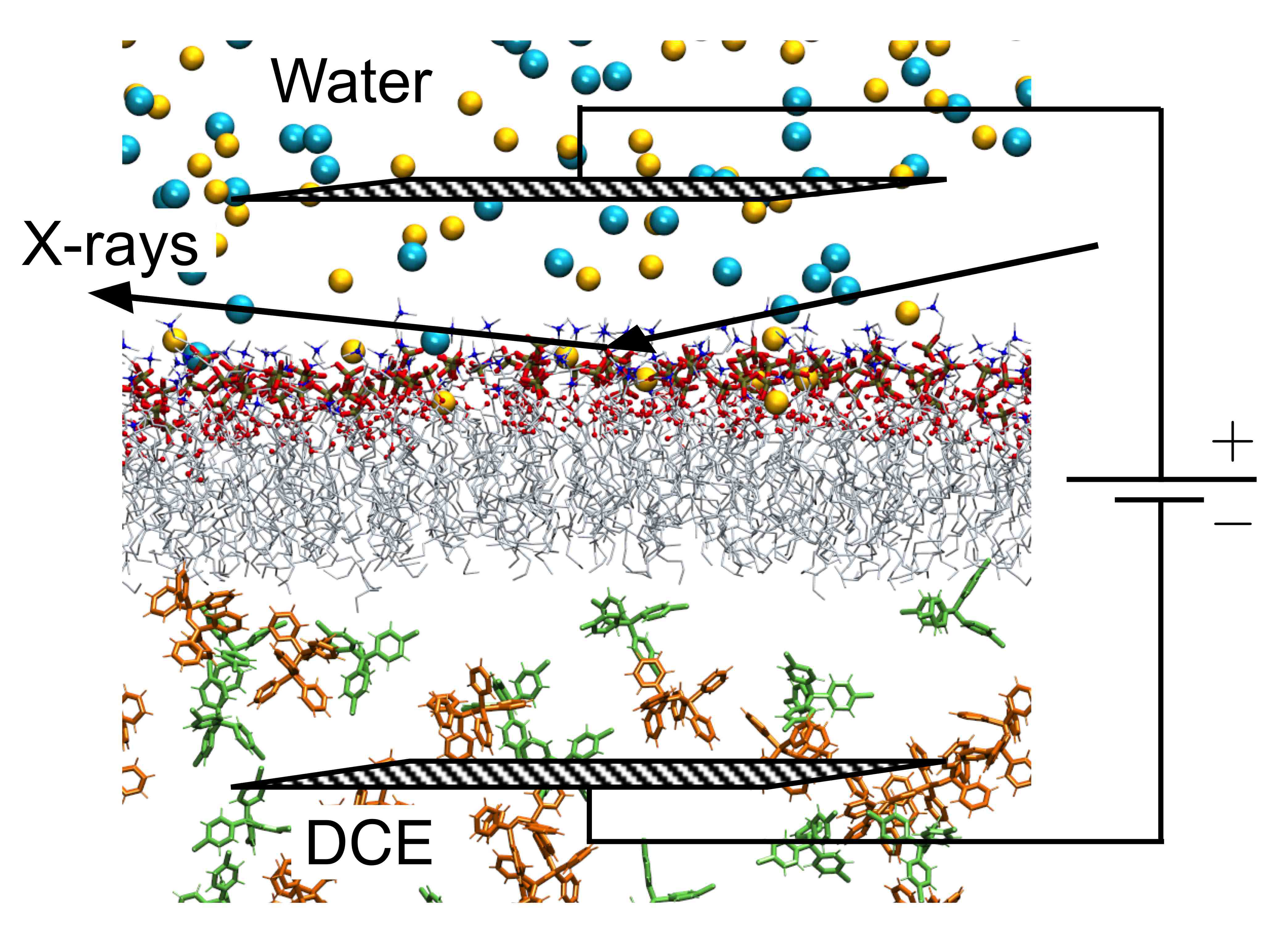 The inside of cells can be negative or positive with respect to the environment outside the cellular membrane, a charge imbalance called the membrane potential. This biological phenomenon drives many key biological processes, from the generation of energy-rich molecules to the firing of nerve cells. One theory is that the membrane potential activates these processes by reordering the lipids that make up the cellular membrane. To investigate the role of the membrane potential in the organization of lipids in the membrane, researchers developed a system that mimics the biological membrane. They then examined the structure of the biomimetic membrane under a range of different membrane potentials with x-ray reflectivity measurements taken at the U.S. Department of Energy’s Advanced Photon Source (APS), an Office of Science user facility. The researchers found that membrane stability depends on the potential, an important insight for understanding how membranes spur biological processes.

To create the biomimetic membrane, the researchers from the University of Illinois at Chicago, Northern Illinois University, and The University of Chicago used a liquid-liquid electrochemical sample cell, which allowed them to apply a potential to their sample. This cell contained two liquid layers, separated by a horizontal layer of lipids that imitated the membrane. The top layer consisted of a water solution designed to mimic the exterior of cells, with a pH of 7.2 and 100 mM NaCl. The bottom layer contained 1,2-Dichloroethane (DCE), an oily lipophilic liquid. The membrane imitation was made up of 1-stearoyl-2-oleoyl-sn-glycero-3-phosphocholine (SOPC). SOPC is an unsaturated lipid, which are common in natural cellular membranes. The lipid's hydrophilic head group, phosphocholine, orients itself toward the aqueous top layer of the cell, while the hydrophobic tail points down into the DCE layer, forming a lipid monolayer.

The next step was to take the electrochemical cell to the ChemMatCARS 15-ID-B,C,D beamline at the Argonne APS for examination by x-ray reflectivity. In this method, the x-ray beam is directed at an angle toward the lipid monolayer. The beam reflects off the monolayer, carrying with it electron density information that can be interpreted as the thickness of the biomimetic membrane. The researchers collected x-ray reflectivity data on the monolayer over a range of biologically relevant membrane potentials, from -150 mV to +130 mV. Over this range, the electron density profile of the monolayer didn't change, suggesting that the lipids maintained a similar order. However, when the researchers increased the potential further, up to +330 mV, the monolayer began to change.

To provide complementary experimental data, the researchers studied the monolayer with quasi-elastic light scattering, which measures interfacial tension. In this method, laser light is transmitted through the lipid monolayer and then projected through a grating. The diffracted light is converted into a spectrum, which can be interpreted as interfacial tension. The interfacial tension rises with increasing membrane potential, which supports the idea that the lipid reconfigures itself at higher potentials to decrease occupancy at the interface. As lipid leaves the interface, the tension of the interface rises to approach the higher value of the bare water-DCE interface. Therefore, the quasi-elastic light scattering data is consistent with the x-ray reflectivity data.

As an independent test, the researchers performed a molecular dynamics simulation on the system, basically recreating the electrochemical cell experiment inside a computer. Reassuringly, the monolayer structures observed in the simulation squared well with those calculated from the x-ray reflectivity data. The simulations showed that the changes in structure at higher membrane potentials are due to the increase in interfacial surface area for each lipid, and secondarily to electric dipole-related considerations. Taken together, the simulations and experiments suggest that dipole interactions of zwitterionic lipids (lipids with ions having separate positively and negatively charged groups) with electric fields of the strength commonly found in biological systems play a relatively minor role in lipid organization, but that other effects such as electric field-induced chemical reactions can have a significant effect.

The research team has plans for future experiments to investigate other biophysical processes that are driven by electric fields. Of particular interest are processes at the nerve synapse and the binding of peripheral membrane proteins to biomembranes.