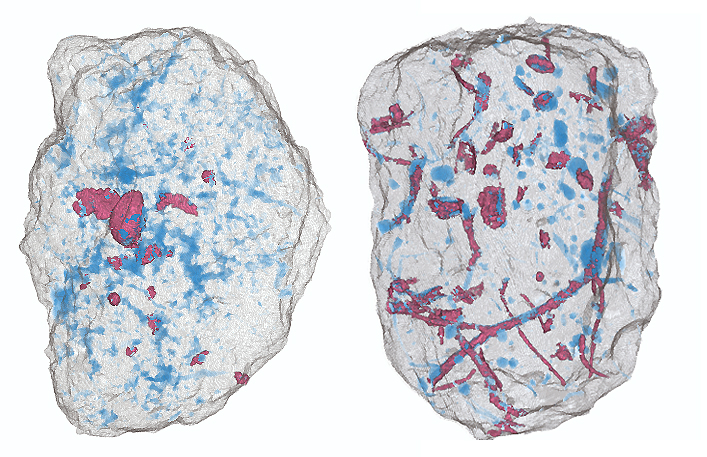 As a farmer toils in the fields, teeming beneath the earth’s surface are millions of microbes that are also busy working the soil. Many soil processes — such as nitrogen fixation, organic decomposition, and mineral release — rely on bacterial activity. A diverse microbial community, which is necessary for maintaining equilibrium in the soil, appears to be promoted by certain farming practices, such as using cover crops in the winter months. But it is unclear what specific soil characteristics lead to microbial diversity.  A new study by a team of researchers gives a “microbial view” of the soil environment by combining genetic analysis with x-ray imaging performed at the U.S. Department of Energy’s Advanced Photon Source (APS), an Office of Science user facility. The researchers identified pores within soil samples and showed that greater biodiversity occurs in soils with a large variety of pore sizes. The results also revealed a preference for some bacteria to live in pores of a particular size.

We tend to think of soil as just a collection of dirt and organic remains. But soil has a complicated structure. Particles tend to cling together into millimeter-sized clumps, and within these “aggregates,” there is a network of micron-sized pores. All these holes and crevices allow air and water to penetrate into the soil, while also promoting the cycling of nutrients. Microbes live within soil pores, relying on the flow of material through these open spaces. Previous research has demonstrated that the porous micro-environment has a greater effect on microbes than macro-environment inputs, such as chemical and organic additives.

Over the last ten years, soil scientists have begun mapping out the microscopic habitat inside soil samples with x-ray computed microtomography (μCT). This synchrotron-based technique provides three-dimensional images of soil samples, showing where pores and plant and animal residues are located. To explore the influence that pore structure has on microbial diversity, researchers from Michigan State University and the University of Chicago have performed μCT in conjunction with site-specific genetic analysis.

As described in their paper from the Soil Science Society of America Journal, the team chose experimental plots from two different types of farming practices at the Kellogg Biological Station near Kalamazoo, Michigan (USA). The first type was cultivated in a conventional manner with routine treatments of chemical fertilizers, herbicides, and pesticides. The second agricultural management system, by contrast, had a history of organic farming, in which a cover crop of red clover and rye was planted in the fall after each harvest. Cover crops have a number of attractive features. They limit erosion, reduce weeds, and trap more carbon in the soil than conventional farming. Recent work has also shown that soils where cover crops are used host a more diverse set of microbes. Soil pore structure is one possible explanation for this apparent fondness among microbes for cover crops.

For their analysis, the team sifted soil samples to isolate aggregates that were 4-6 millimeters across. Using the GeoSoilEnviroCARS 13-BM-D x-ray beamline at the Argonne APS, they imaged these tiny soil clumps with 13-micrometer spatial resolution and identified pores and particulate organic matter using well-defined algorithms (see the figure). The μCT results showed that aggregates from the cover crop plot had a greater variety of large and small pores than were found in the conventional farming plot. This heterogeneous pore structure is likely due to the continuous presence of live roots, which help to form and stabilize pores of different sizes.

To highlight the influence of these pores on biology, the team extracted DNA from different segments of their soil aggregates. By targeting a specific gene (16S rRNA), the researchers were able to identify the types of microbes in each soil segment. Surprisingly, the microbial communities in different aggregates were quite distinct from each other (as well as from un-sifted bulk soil samples), suggesting that microbes are rather “picky” about where they live.

Indeed, the data revealed that certain bacteria, such as Actinobacteria and Firmicutes, preferred areas with large pores, whereas other organisms tended to inhabit small and medium-sized pores.

One concern was that x-ray exposure would selectively kill certain microbes. However, the team confirmed that this was not the case by performing genetic analysis on non-scanned soil aggregates and finding that the microbe distribution matched that in scanned aggregates from the same site. The authors conclude that one of the ways in which cover crops increase microbial diversity is by offering soil inhabitants a wide range of pore accommodations.  — Michael Schirber

Support for this research was provided in part by USDA-NIFA Award no. 2011-68002-30190.7 cropping systems Coordinated Agricultural Project (CAP); by the U.S. National Science Foundation LTER Program at the Kellogg Biological Station (DEB 1027253); by Kellogg Biological Station; by Michigan State University’s “Project GREEEN” Program; and by Michigan State University’s “Discretionary Fund Initiative” Program. GeoSoilEnviroCARS is supported by the National Science Foundation - Earth Sciences (EAR-1128799) and Department of Energy-GeoSciences (DE-FG02-94ER14466). This research used resources of the Advanced Photon Source, a U.S. Department of Energy (DOE) Office of Science user facility operated for the DOE Office of Science by Argonne National Laboratory under contract no. DE-AC02-06CH11357.