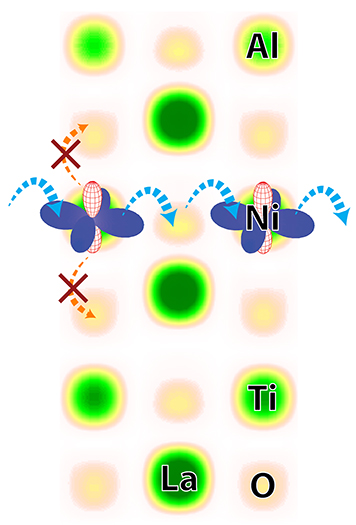 Transition-metal oxides (TMOs) such as titanium oxide and nickel oxide are at the center of some of the most fascinating and important topics in solid-state physics, including superconductivity and the exploration of ferromagnetic and ferroelectric phenomena. By precisely "tuning" the structure and composition of TMOs, it is possible to achieve new insights into their behavior and potential for practical applications in electronics and materials science. Usually, such efforts rely on controlling mechanical properties of the crystalline lattice, such as by inducing epitaxial strain.

But, working at two U.S. Department of Energy x-ray light sources, including the Advanced Photon Source, experimenters have taken a more subtle and ambitious approach by actually controlling and manipulating the orbital properties of TMOs. Their work raises intriguing prospects for the development of useful techniques for the customization and fine-tuning of the electronic, magnetic, conductive, and even optical properties of various materials. The ability to tune electronic orbital characteristics and symmetry of solids could allow a magnetic material to change to a nonmagnetic state under specific conditions, or an insulator to change to a conductor. Such a strong yet flexible level of control over atomic structure and its resulting material properties could have startling and profound implications, not only in electronics but in virtually every other area of engineering and materials science.

In the present study, the researchers from Yale University, Columbia University, Brookhaven National Laboratory, and Oak Ridge National Laboratory used LaNiO3 (LNO) as the basis of a heterostructure lattice, constructed one atomic layer at a time with molecular-beam epitaxy, consisting of LNO layers stacked with LaTiO3 (LTO) and LaAlO3 (LAO), as shown in the figure. They studied the configuration with various x-ray absorption and diffraction studies at X-ray Science Division beamline 33-ID of the Argonne Advanced Photon Source, and beamline U4B of the National Synchrotron Light Source at Brookhaven National Laboratory. Both the Advanced Photon Source and the National Synchrotron Light Source are Office of Science user facilities.

The specific orbital configuration of an atom is one of the key factors in governing how it behaves on its own, in bulk, or when interacting and bonding with atoms of other elements. It follows, then, that if this fundamental physical property can be altered in a material, so can the material's characteristics.

The researchers first performed extensive theoretical calculations using density functional theory (DFT) techniques to determine precisely what sort of structural arrangements would have the strongest and most marked effects on the nickelate TMO orbitals, and designed their experiment to best achieve them.

Normally, in bulk LNO, the two Ni 3deg orbitals are at the same energy level, but in this particular system, with a layer of LNO sandwiched between the other two TMOs, the Ni cation produces an orbital polarization, preferring to fill the 3z2-r2 orbital over the x2-y2 orbital. This changes the usually degenerate structure of the eg band into a single-band system. A charge transfer occurs from Ti to Ni, resulting in the large Ni orbital polarization and a significant dipolar field. These results are far greater than the orbital polarizations that can be practically obtained by previously explored and more conventional methods such as epitaxial strain or confinement. The observed effects of the x-ray studies agree quite closely with predictions from the DFT calculations. Also, unlike some past similar experiments in which the role of random defects or irregularities in the materials used could not be ruled out as a contributing factor, the effects displayed in the present work can be directly and demonstrably correlated with the actual structure of the TMO layers.

This article was selected for the Physics Viewpoint “Orbital Engineering, By Design.”

This work was supported by National Science Foundation Materials Research Science and Engineering Center DMR 1119826 (CRISP). This research used resources of the Advanced Photon Source, a U.S. DOE Office of Science User Facility operated for the DOE Office of Science by Argonne National Laboratory under Contract No. DE-AC02-06CH11357.