A Two-Handed Approach to Solving a Chirality Mystery 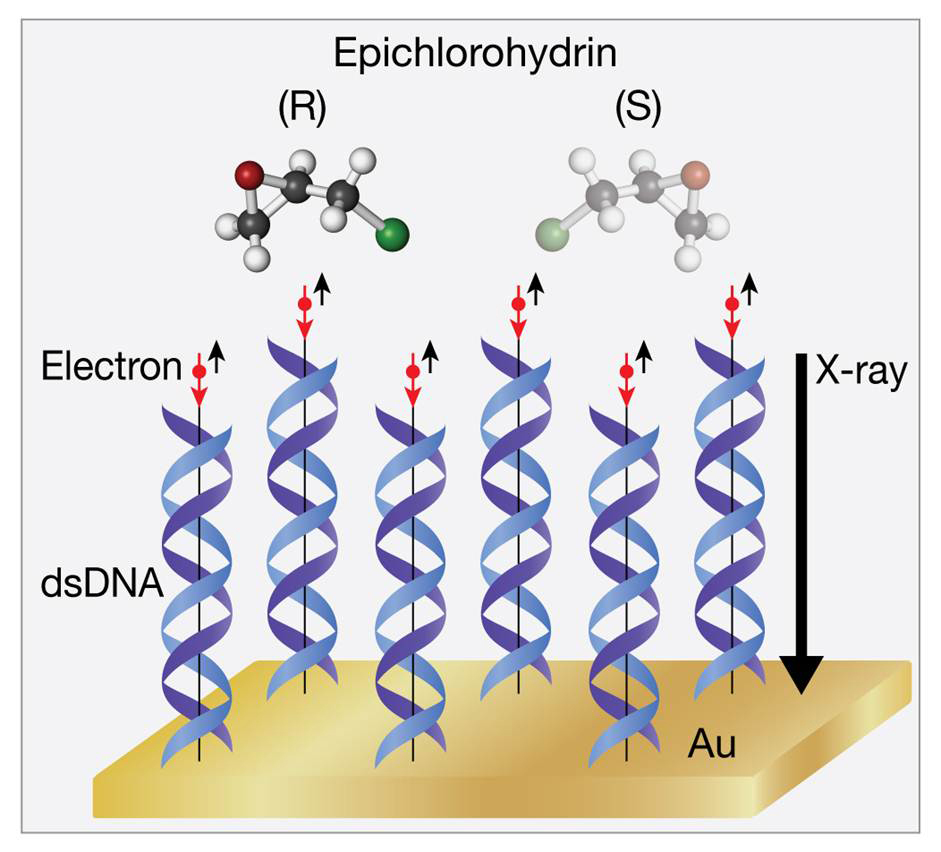 Understanding how the molecules necessary for life originated is one of the most basic scientific problems in modern biochemistry. In 1953, Miller and Urey demonstrated that an electrical discharge in a mixture of common gases produced reactions that led to the creation of important pre-biological molecules such as amino acids. In more recent years, the popular literature has showcased several other approaches that produce biological molecules, such as irradiation of ices found on interstellar dust grains.

One of the great remaining unanswered questions, though, is how does biological handedness arise? This point was emphasized in the 125th anniversary issue of Science magazine, where the editors posed 125 big questions that would drive science in the next 25 years. Among them was this: “What is the origin of homochirality in nature? Most biomolecules can be synthesized in mirror-image shapes. Yet in organisms, amino acids are always left-handed, and sugars are always right-handed. The origins of this preference remain a mystery.”

In a paper published in Angewandte Chemie [1], researchers who used the X-ray Science Division (XSD) 4-ID-C beamline at the Argonne APS, an Office of Science user facility, demonstrate that the natural electron spin filtering properties of one of life’s most basic molecules — DNA — can lead to chiral enhancement, which drives the molecular preference for a particular chirality. These researchers, from Argonne and the Weitzmann Institute, show how a preferred chirality can be introduced into organic molecules. This is achieved via reactions induced by spin-polarized secondary electrons that are produced from the filtering of unpolarized electrons by organized layers of DNA.

Such a mechanism could help explain the chiral preference in pre-biological molecules on the early Earth.

Previous research at the APS has shown that low-energy spin-polarized electrons, produced by irradiation of a magnetic substrate, can cause chiral-specific reactions in an adsorbed chiral layer and thereby lead to an enantiomeric excess (ee, the degree to which a sample contains one enantiomer — a molecule of a particular handedness — in greater amounts than the other).  The present work demonstrates that the natural spin filtering properties of DNA can also lead to an ee.The researchers used x-ray photoelectron spectroscopy to measure the reaction rate of a model chiral compound, (R)- or (S)-Epichlorodhydrin (C3H5ClO, Epi) adsorbed on a self-assembled monolayer of DNA on a gold substrate. The x-rays produce low energy (<10 eV) secondary electrons.The secondary electron-induced reaction was monitored by following changes in the Cl 2p x-ray photoelectron spectroscopy spectra. By kinetic modeling of the reaction, quantum yields (QYs) for Cl loss were determined. The QY for the reaction is the fraction of the molecules excited by the secondary electrons that lead to Cl dissociation.For S-Epi the QY was ~16 % greater than for the (R) enantiomer, while the QYs were the same for the two enantiomers when they were adsorbed on bare Au.

The chiral-selectivity observed is a result of different quantum yields for reaction of spin polarized electrons with the two enantiomers. Such a mechanism may have played a role in the formation of chiral molecules in the prebiotic world.An ee of a molecule formed, for instance, by spin-polarized electrons from a magnetic substrate, could act as a spin filter and thus enhance the spin polarization of the electrons.Thus, the polarization of the electrons would be increased, leading to an even greater degree of chiral enhancement.

This research demonstrates that low energy secondary electrons become spin polarized following transmission through a chiral adsorbed layer, such as DNA.These polarized electrons selectively reacted with a model chiral molecule, epichlorohydring, and preferentially dissociated the S-enantiomer, which would lead to an ee of the R-enantiomer.Such a mechanism may have played a role in forming chiral molecules in the pre-biotic world. 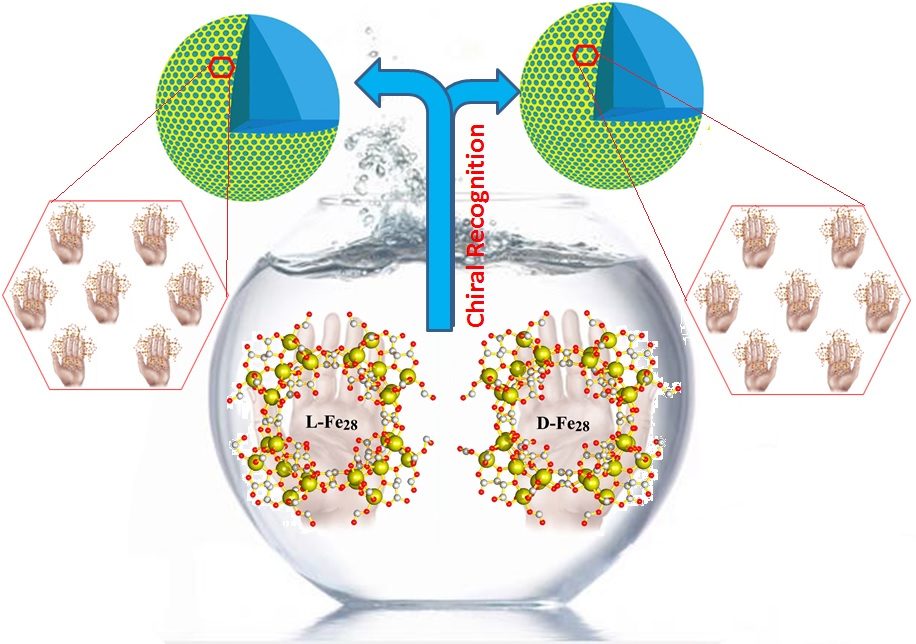 Another approach to answering the chirality handedness question is to better understand how chiral enantiomers (each of a pair of molecules that are mirror images of each other) find and recognize their mirror-image counterparts to form larger structures.

Using inorganic chiral macroions as a model system, a team of researchers from the University of Akron, Emory University, the Northeast Normal University (China), Tsinghua University (China), and Argonne have found that the origins of homochirality might not be quite as mysterious or as complex as they seem.Their work was published in Nature Communications [2].

The team was not aiming to address the complete homochirality question.But they found that the self-recognition behavior previously believed to be exhibited only by complex biomacromolecules can be achieved by simple molecules as long as they are large and carry moderate charges.

The researchers used individual solutions and a racemic mixture of two Fe28 enantiomers, one of them left-handed ("levorotatory" or L-Fe28) and the other right-handed ("dextrorotatory" or D-Fe28).(Ba2+ was used with each as counterions.)The Fe28 molecule largely consists of tartaric acid ligands with Fe ion connectors, with a surface fully covered by tartaric and formic acids.In that way, the inter-cluster interactions are dominantly determined by the nature of the covered organic molecules, making them the best analog to study the behavior of organic macromolecules.

The Fe28 macroions tend to arrange themselves into hollow, spherical "blackberry" structures, a process that is unique to nanoscaled, soluble ions containing moderate charges and parallels the manner in which viral capsids form.The researchers studied the assembly process using several techniques, including static light scattering and transmission electron microscopy, and small-angle x-ray scattering (SAXS) at the XSD 12-ID-B beamline of the APS.

Although the self-assembly process might normally be expected to take about the same time in the racemic solution compared to the individual solutions, the experimenters found otherwise.The macoions in the mixed racemic solution showed a much slower rate of self-assembly into their blackberry structures.This implies that the individual enantiomers are able to distinguish their own kind from their opposite numbers and bonding only with their own chiral forms — a process that obviously takes longer when a molecule is forced to seek out its congenial companions in an environment also filled with its "disliked" opposites.

This marks the first time that chiral recognition and selection have been observed in spontaneous inorganic assemblies in dilute solution; such phenomena were previously believed to be limited only to biomacromolecules.

The chiral recognition behavior seen in these experiments is due to simple long-range electrostatic interaction rather than phenomena such as hydrogen bonding or aromatic stacking.The experimenters actually used this to select and separate L-Fe28 or D-Fe28 enantiomers from a racemic mixture merely by adding chiral co-anions to the solution, which was seen to selectively suppress the self-assembly of one or the other enantiomers.For example, adding D-lactic acid suppressed the Ba-D-Fe28 while increasing the assembly rate of Ba-L-Fe28, whereas an L-lactic acid buffer had the reverse effect.The researchers suggest that this could present a possible explanation for the origins of natural homochirality, with a particular environment favoring one chirality over another simply by the electrostatic interactions it allows.

The team next intends to explore other possible factors involved in chiral recognition and selection such as counterion valence, solvent polarity, and cluster charge density, with an ultimate goal of precisely tuning the chiral selection behavior.While the current work certainly does not fully resolve all the questions, it opens up some intriguing new directions for further experimental investigation, providing a fresh twist on the long-standing puzzle of homochirality.— Richard Rosenberg and Mark Wolverton

R.N. and D.M. acknowledge the support from the ARC-Adv grant.