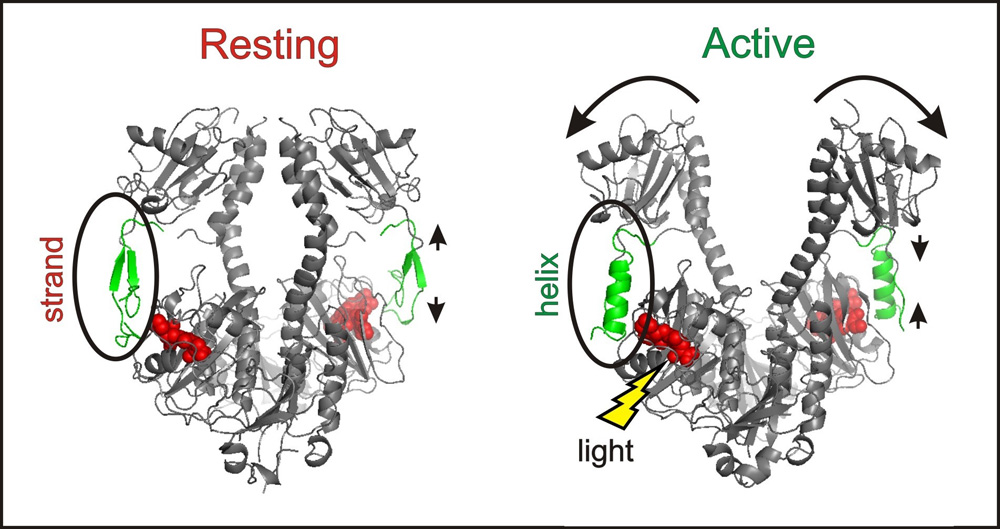 Sunlight is the basis for all life on Earth so it should come as no surprise that many organisms have developed complex systems for detecting the quality and quantity of light in their environment. Plants, fungi, and many species of bacteria use light-sensitive proteins called phytochromes to control biological functions that respond to changes in light. In the bacterial species Deinococcus radiodurans, a red/far-red-light absorbing phytochrome controls the production of light-protective pigments. The structure of the phytochrome in the resting state has been solved, but the question of how the signal from light gets transformed into a biological action has remained elusive. Now, in work that was carried out at the BioCARS beamline 14-ID-B at the U.S. Department of Energy's Advanced Photon Source, as well as at the European Synchrotron Radiation Facility and the Swiss Light Source, researchers have collected structural data on the active state of the phytochrome sensory module that provide exciting new insights into how it transforms light into action. These findings fill in critical steps in our understanding of these complex sensory systems, manipulation of which may have many future applications in agriculture.

A research team from the University of Gothenburg (Sweden), at the University of Jyväskylä (Finland), The University of Chicago, and the Paul Scherrer Institut (Switzerland) sought to learn more about the active state structure of phytochrome systems by comparing structural data for the resting and the activated forms of the phytochrome from D. radiodurans. Their initial experiment involved utilizing the BioCARS beamline at the Advanced Photon Source (an Office of Science user facility) for time-resolved solution x-ray scattering measurements of the phytochrome sensory module in the two states. To achieve this, they flashed a solution of the phytochrome with short bursts of red light to convert between the resting and the active state. In the interim between the flashes, they collected the x-ray scattering data. Analysis of the data revealed the build-up of large conformational changes between the two structures at the nanometer scale.

With this promising data in hand, the team sought higher resolution data to determine the exact nature of the molecular changes that were taking place between the two states. For this, they crystallized the phytochrome in both the resting, Pr (red-absorbing) and active, Pfr (far-red absorbing) state. Both structures showed that the phytochrome forms a dimer with two copies of the protein forming a single unit. In the resting state, the dimer is in a "closed" configuration and a highly evolutionarily conserved amino acid sequence forms a tongue-like structure (see the figure).

In the resting state, the tongue forms a β-sheet secondary protein structure. Absorption of red light by the Pr form causes dramatic changes in the protein. The two halves of the dimer adopt an "open" conformation, widening the gap between them by several nanometers. Remarkably, the tongue now converts to a completely different protein secondary structure and adopts a much shorter, α-helical conformation. The new tongue is 2.5 angstroms shorter and interacts with different conserved amino acids than the resting state tongue. This change is sufficient to explain how the active state of the protein may transmit changes to the next protein in the signaling cascade in response to light.

The data obtained by the team provide the sequences of steps required to convert light into action. First, red light absorption causes changes in the chromophore at the atomic level, which are amplified and transmitted to the surrounding phytochrome. These changes result in dramatic rearrangement of the tongue, which shortens by 2.5 angstroms. Shortening of the tongue causes a shift in the rigid dimer structure of the phytochrome and the dimer "opens" by several nanometers. The conformational signal is amplified from a small nudge at the atomic level to a dramatic protein rearrangement on the nanometer scale. Action!

According to the team, this mechanism of action has fallen on fruitful ground in the research community and different aspects of the structural mechanism have already been verified in publications by other groups. The team's next goal is to decipher how the structural signal is converted into a biochemical signal in the output domain of the phytochrome. This will require collecting more structural data on the D. radiodurans and other phytochromes.

This research was supported by grants to S.W. by the Foundation of Strategic Research, Sweden, and the Swedish and European Research Councils, agreement number 279944; support to J.A.I. by Finnish Academy grant 138063; and to H.T. by the Finnish Cultural Foundation grant 0131067. Use of BioCARS was supported by the National Institute of General Medical Sciences of the National Institutes of Health under grant number R24GM111072. This research used resources of the Advanced Photon Source, a U.S. Department of Energy Office of Science User Facility operated for the DOE Office of Science by Argonne National Laboratory under Contract No. DE-AC02-06CH11357.