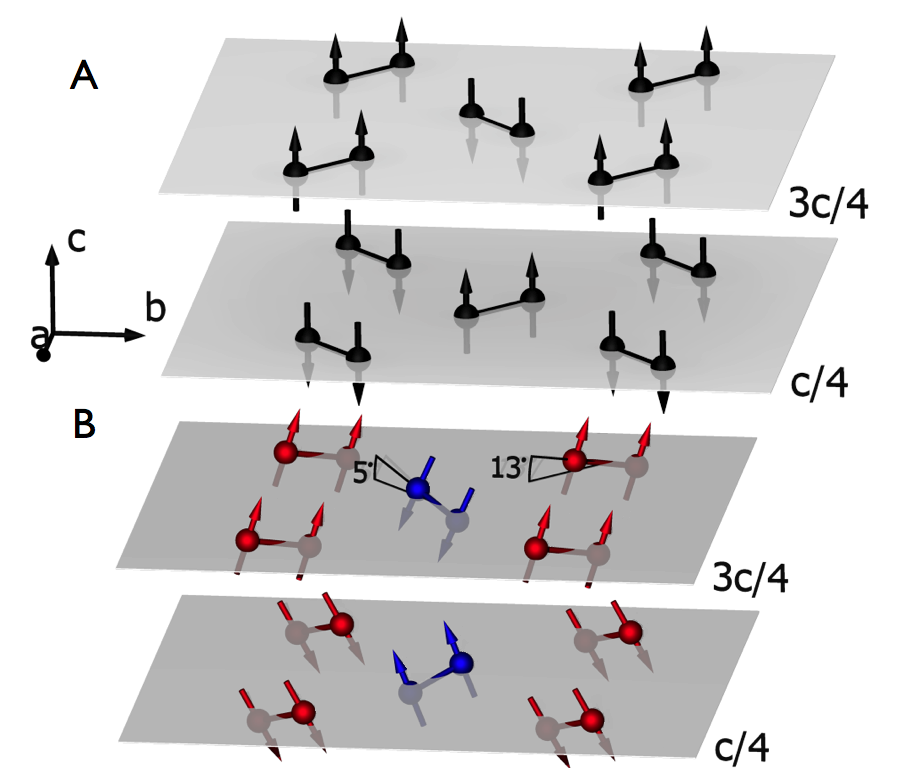 Researchers carrying out experiments at the U.S. Department of Energy’s Advanced Photon Source (APS) and Spallation Neutron Source have shed new light on how magnetic long-range order forms and remains stable despite the presence of disruptive quantum fluctuations. Since the material under study, SrCu2(BO3)2 (SCBO), bears important similarities to layered Cu-O compounds that exhibit high-temperature superconductivity, the research, published in the Proceedings of the National Academy of Sciences of the United States of America, may provide insights into this form of quantum magnets as well, which has eluded thorough understanding for nearly 30 years.

SCBO contains magnetic spins that derive from Cu2+ ions sitting at the corners of square lattices on stacked, well-separated, two-dimensional sheets. The result is a network of Cu-Cu couplings of various strengths. Copper ions that are closest to one another on each atomic sheet are strongly bound together, forming dimers through exchange interactions. These Cu ion dimers experience inter-dimer couplings with nearest-neighbor dimers on the same sheet and with nearby dimers on adjacent sheets. The dimers give rise to a non-magnetic state at ambient pressure; however, it has been theoretically predicted that SCBO can be driven to an antiferromagnetic state by applying sufficient pressure.

Sara Haravifard with the six-circle diffraction stage in the 4-ID-D experiment station. 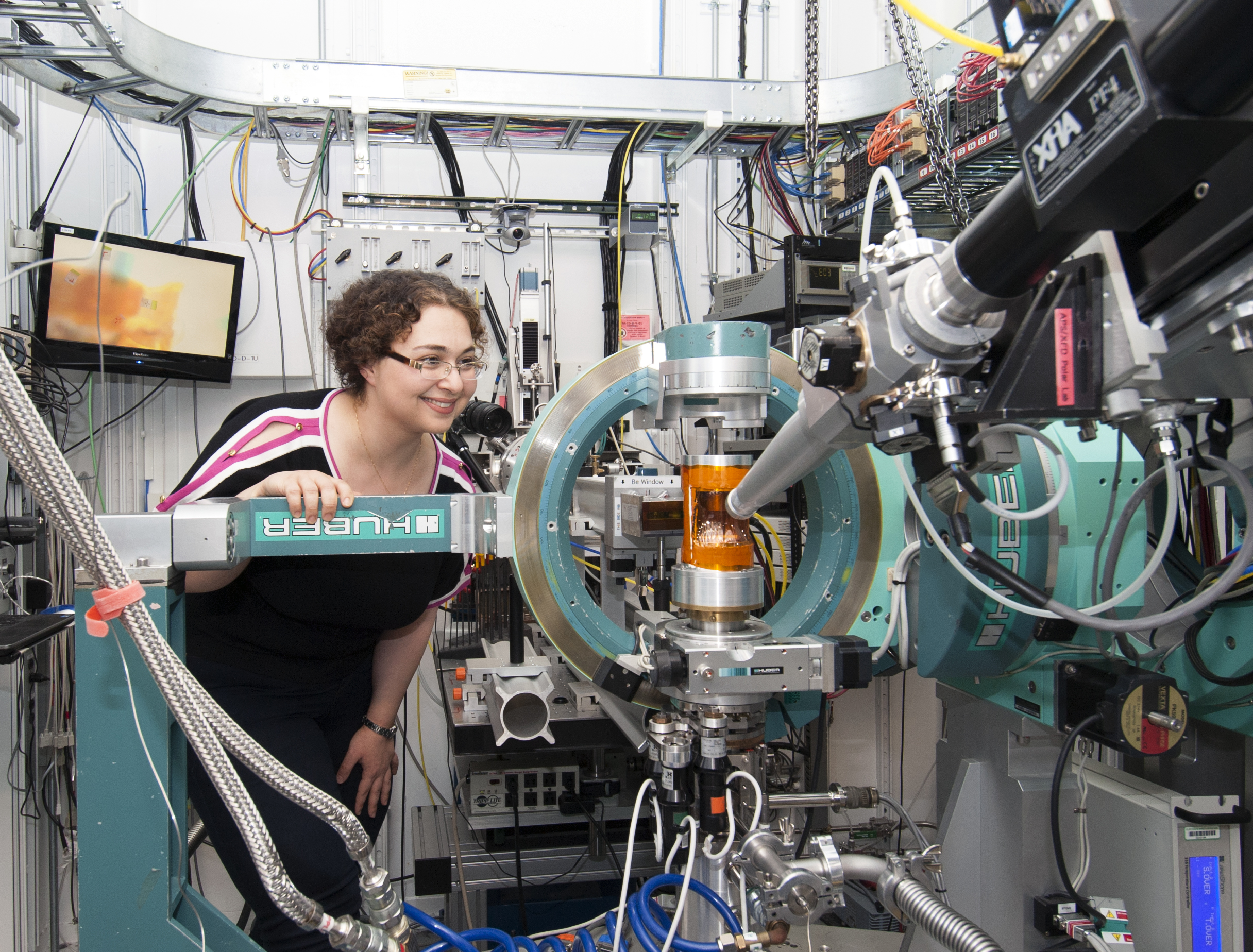 “SCBO is an experimental realization of an important theoretical model of how sheets of magnetic spins interact,” said the article’s first author, Sara Haravifard, a physicist with the Magnetic Materials Group in the Argonne National Laboratory X-ray Science Division (XSD), and at the University of Chicago. “Although the antiferromagnetically ordered phase was predicted, it had not been directly measured nor was there any insight into how a two-dimensional system could accommodate long-range order. We were able to observe the long anticipated ordered phase using a new high-pressure single-crystal neutron scattering technique at the SNAP beamline of the U.S. Department of Energy’s Spallation Neutron Source at Oak Ridge National Laboratory.”

The researchers in this study, who are based at the University of Chicago, Argonne, the University of Bristol, Oak Ridge National Laboratory, and McMaster University performed a battery of experiments using x ray and neutron diffraction techniques at pressures up to 6 GPa. These measurements revealed the complex interplay of structural distortions and spin alignments that permit long-range magnetic order to emerge.

The data showed that the antiferromagnetic state of SCBO becomes stabilized through subtle dimer contractions, elongations, and tilts, which impact the relative strengths of the intra-dimer and inter-dimer couplings.

The results of x-ray scattering measurements at XSD beamline 4 ID D of the APS, an Office of Science user facility, were particularly valuable in showing that couplings between the ordered, tilted dimers on consecutive sheets contribute importantly to the long-range order that arises, and thus that the antiferromagnetic phase emerges from inherently three-dimensional magnetic and structural distortions. The x-ray data also enabled the researchers to pinpoint the phase transition temperature as being 122 K.

Complementary high-resolution powder neutron diffraction measurements conducted at the SNAP beamline added more detail to this picture by determining the atomic positions of the copper ions as they shifted with temperature at a pressure of 5.5 GPa. Above 122 K, all of the dimers were found to be equivalent in that they were of equal length and remained within the plane of their respective atomic sheet.

At 122 K and below, these previously equivalent dimers separated into two interleaved sets of dimers of different lengths. One set consisted of elongated dimers, while the other set contained contracted dimers. Both sets of dimers became tilted as well, with the elongated dimers showing a larger slant (13°) than the subtle tilt (5°) evidenced by the contracted dimers (Fig. 1). These results provided additional evidence that the antiferromagnetic state in SCBO is due to three-dimensional magnetic and structural distortions.

“At a pressure of 5.5 GPa, we observed that the system goes into the antiferromagnetic phase at temperatures below 122 K. The results illuminate the microscopic mechanism needed to stabilize long-range order, revealing that the very subtle expansions, contractions, and tilts of the dimers permit the long-range order to emerge,” said Haravifard.

“So although the system has a dimensional crossover from two dimensions to three dimensions, it is barely three dimensional, and the combination of x-ray and neutron diffraction results indicate that this subtle emergence in the third dimension is driven by the anisotropic weak spin-orbit magnetic interactions between the Cu dimer layers. This underscores the importance of such interactions to the formation of exotic magnetic ground states.”— Vic Comello

This research used resources of the Advanced Photon Source, a U.S. Department of Energy Office of Science User Facility operated for the DOE Office of Science by Argonne National Laboratory under Contract No. DE-AC02-06CH11357.