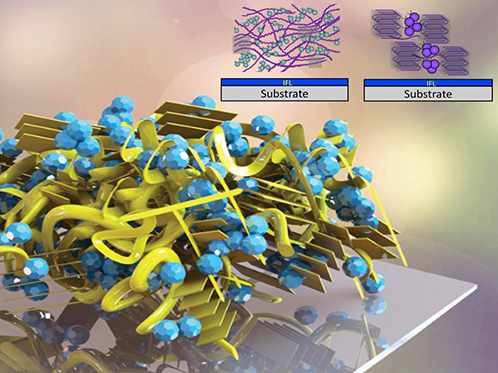 Fossil fuels began as sun-powered plants and animals. Wind begins as unevenly heated air. Only recently have we learned how to harvest our electricity directly from sunlight. We do this using the photovoltaic effect — literally “light voltage” — in which solar energy frees charge carriers to move about. A photoelectric device, or solar cell, uses this conversion to generate electrical current. Traditional solar cells are made of stiff semiconductors, but polymer solar cells use long, flexible carbon-based molecules. Polymer solar cells aspire to be everything traditional solar cells are not: lightweight, flexible, simple to produce, environmentally friendly, low-cost, and ubiquitous. Unfortunately, they currently suffer problems with efficiency and stability — enough to all but cancel out their attributes. Recently, a polymer was discovered with excellent solar efficiency, meaning that each bit of sunlight absorbed produces more power than other polymers. Researchers working at the U.S. Department of Energy’s Advanced Photon Source (APS) went looking for the why. What they found may force others to reevaluate how they select solar cell polymers, and help to create more efficient, market-valuable devices.

The new promising polymer is called PTB7. If this were sports instead of science, PTB7 would be the young upstart and P3HT would be the seasoned champion unceremoniously knocked off the leader board. But how was PTB7 able to perform so well?

To answer their questions, the researchers needed a thorough understanding of both polymers’ structures, and intimate knowledge of how their electrons interact and move in and between their molecules. For structural studies, the researchers turned to the X-ray Science Division 8-ID-E beamline at the Argonne National Laboratory Advanced Photon Source, an Office of Science user facility. There, the researchers from Northwestern University and Argonne performed grazing-incidence small angle x-ray scattering (GISAXS) and wide-angle x-ray scattering (GIWAXS) measurements, which supplied information such as the presence and size of repeating units with the polymers, and how they were arranged. Polymers are notoriously difficult to probe because their long molecules often tangle like a bowl of spaghetti. The high brightness of the APS x-rays and the state-of-the-art 8-ID-E x-ray beamline enabled the scientists to find tiny crystalline areas inside the tangles.

An efficient polymer solar cell must do four things well: harvest sunlight to create highly energetic excitons, move excitons to the boundary of the electron donor/acceptor materials, split excitons into positive and negative charges (holes and electrons), and collect these charges at the electrodes to generate current. The interface between electron donor materials and electron acceptor materials act as exciton separation sites. The researchers found that PTB7 excitons separated into electrons and holes more easily than other polymers.

Structural measurements showed that molecules within PTB7 arranged themselves into a much more disordered arrangement than P3HT, whose molecules formed more crystalline blocks. This meant that exciton separation sites were interspersed throughout PTB7, while separation sites in P3HT tended to pack together at the crystallite edges.

Excitons also separated into charge carriers at junctions within PTB7 molecules. This was strange because exciton separation usually occurs at interfaces between donor and acceptor materials. PTB7 molecules were working as both.

The researchers propose that the structural and chemical characteristics of PTB7 help excitons move along and between molecules and to separation sites more efficiently. An exciton travels along the polymer backbone until it comes to a charge acceptor. This acceptor can be an added material, or it can be a polymer segment within the molecule with different electron affinity. With so many available sites, exciton dissociation happens quickly. This super-fast carrier transport decreases instances in which excitons re-combine, leading to more efficient solar to electrical energy generation.

This work is significant because it had been assumed that charge transfer and separation processes within molecules were unimportant for device performance. Here the researchers found that structural and chemical variations caused stark differences in exciton splitting in the two polymers, with intramolecular charge separation playing an important role.

The researchers suggest that others reevaluate the necessary conditions for exciton splitting in photovoltaic polymers, using PCB7 as a model. Greater efficiency is crucial for polymer solar cells to become the solar energy device of choice, and this information brings polymer photovoltaics closer to the consumer market. — Jenny Morber

This research is supported by the ANSER Center, an Energy Frontier Research Center funded by the U.S. Department of Energy, Office of Science, Basic Energy Sciences, under Award Number DE-SC0001059.

This research used resources of the Advanced Photon Source, a U.S. Department of Energy Office of Science User Facility operated for the DOE Office of Science by Argonne National Laboratory under Contract No. DE-AC02-06CH11357.