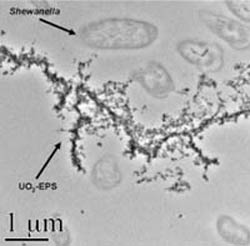 Since the discovery a little more than a decade ago of bacteria that chemically modify and neutralize toxic metals without apparent harm to themselves, scientists have wondered how on Earth these microbes do it.

For Shewanella oneidensis, a microbe that modifies uranium chemistry, the pieces are coming together, and they resemble pearls that measure precisely 5 nanometers across enmeshed in a carpet of slime secreted by the bacteria.

The pearl is uranium dioxide, or uraninite, which moves much less freely in soil than its soluble counterpart, a groundwater-contamination threat at nuclear waste sites.

The U.S. Department of Energy (DOE) estimates that uranium contaminates more than 2,500 billion liters of groundwater nationwide; over the past decade, the agency has supported research into the ability of naturally-occurring microbes that can halt the uranium's underground migration to prevent it from reaching streams used by plants, animals, and people. Assembling a battery of evidence, scientists have for the first time placed the bacterial enzymes responsible for converting uranium to uraninite at the scene of the slime, or "extracellular polymeric substance" (EPS), according to a study led by the DOE's Pacific Northwest National Laboratory (PNNL) and published in PLoS Biology.

Another oddity is S. oneidensis' ability to "breathe," or reduce, metals the way we human beings do oxygen. When oxygen is unavailable, Shewanella can pass excess energy during respiration in the form of electrons to metal and alter the metal's chemistry in the bargain – for instance, turning soluble uranium into solid, insoluble uraninite (uranium dioxide).

The PNNL researchers wondered whether uranium-reducing components in that stuff outside the cell, the EPS, might help Shewanella seek out and lock up heavy metals.

To pose that question, which remains open, they first had to prove that the same metal-reducing enzymes – proteins called c-type cytochromes – associated with uraninite formation in the outer membrane could also be found outside the cell in the EPS.

This they did through a variety of experiments that included creating mutant strains unable to make outer-membrane cytochrome, or OMC, leading to an excess of uraninite particles forming only inside the cell, in the periplasm – the region between the microbe's cell and outer membrane. In nonmutants, on the other hand, OMC and uraninite were found mainly outside the cell in association with the EPS.

Collaborators from Argonne National Laboratory applied x-ray fluorescence microscopy at the X-ray Operations and Research 2-ID-D beamline at the DOE’s Advanced Photon Source to show that iron, which is also found in OMC, was in the uraninite-EPS complex. Combining high-resolution microscopy and OMC-specific antibodies, the researchers repeatedly found the metal-reducing proteins in the uraninite-EPS complexes.

The authors noted that the OMC-containing EPS may be involved in the transfer of electrons outside the cell or is possibly a way the microbes shed the uraninite particles. The sticky EPS may behave like glue and bind the uranium particles to soil, further impeding its migration in the environment.

The research was funded by DOE's Office of Biological and Environmental Research, Environmental Remediation Sciences Program and Genomics: Genomes to Life. Part of this research was performed as a biogeochemistry grand challenge at the W.R. Wiley Environmental Molecular Sciences Laboratory, a DOE national user facility located at PNNL. Use of the Advanced Photon Source was supported by the U. S. Department of Energy, Office of Science, Office of Basic Energy Sciences, under Contract No. W-31-109-ENG-38.

Argonne is a U.S. Department of Energy laboratory managed by The University of Chicago