A New Alloy Comes into View 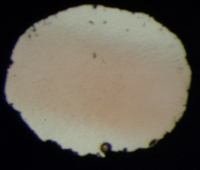 It is known that ice formed under higher than atmospheric pressure can assume one of at least a dozen different known phases, characterized by crystal structures, densities, and O-H bonding that differ from those of ordinary, hexagonal crystalline ice (Ih), but the precise details of the chemical bonding that characterize each of these exotic phases are still not fully understood. To expand our knowledge of the rich phase diagram of ice at high pressure, a team of scientists from Los Alamos National Laboratory (LANL), the Carnegie Institution of Washington, the University of Chicago, and the National Synchrotron Radiation Research Center, working at the U.S. Department of Energy’s Advanced Photon Source (APS), investigated H2O at high pressure in a diamond anvil cell. Using an inelastic x-ray scattering technique—x-ray Raman spectroscopy—the researchers bombarded the compressed H2O samples with moderately hard (~10-keV) x-rays to probe the sample’s oxygen K-edge structure. Serendipitously, in the course of their investigation they discovered a previously unseen, stable compound of O2and H2 molecules that may open the door to exciting new directions in radiation chemistry research.

They knew that for oxygen bonded with hydrogen in H2O, the K-edge spectra peaked around 540 eV. For pressures between 1 and 2 GPa (10,000-20,000 atmospheric pressure), they were monitoring the subtle changes of the multiplicity, peak positions and intensity of the 540-eV peak group that reveal the specific O-H bonding that characterizes different ice structures. However, at pressures above 2.5 GPa they found that the x-rays induced cleaving of the H2O molecule, radically altering the spectra. This was evidenced by the appearance of a 530-eV peak, characteristic of O-O bonding in O2 molecules, which reached a maximum of intensity after 6 hours of exposure to the incident x-ray beam. This indicates the loss of O-H bonding, which is the basis of all ice and water structures, by forming a completely new material that still has the H2O composition. At a pressure of 15.3 GPa, this peak was equal in height to the 540-eV multiplet, and this effect was verified by the results of independent experiments performed at the APS and at the SPring-8 light source in Japan.

Well-documented x-ray induced phase transitions are rare. “We weren’t expecting something like this,” said Wendy Mao (LANL), principle investigator and a coauthor on the paper. “The ice sample changed from the familiar colorless solid to light brown, and at first we had no idea what was going on.” Further optical Raman scattering (ORS) measurements clearly fingerprinted the characteristic H2and O2 peaks, which, coupled to a reduced H2O signal, offered clear proof that the H2O molecules had dissociated and a new material made of H2 and O2 molecules had been formed.

To gain a better understanding of this material, the group performed a series of ORS and x-ray diffraction (XRD) experiments to study the effects of beam intensity and exposure times. The precise fingerprinting offered by their experimental technique ruled out the possibility that this material was an exotic mix of hexagonally close-packed (hcp)-H2 and eO2, and showed that the material was an alloy with approximate chemical formula (O2)(H2)2.

The XRD studies of the H2-O2 alloy at beamline 16-ID-B of the High Pressure Collaborative Access Team, APS, Argonne National Laboratory, revealed the material was a well-crystallized solid and, so far, a very stable one at ambient temperature and high pressures. “We made a sample in March and it shows no signs of transforming back to ice” said Mao. “This is very exciting for us. My original interest in studying ice, beyond gaining a better understanding of the complete phase diagram, was to investigate the possibility of using it to store hydrogen in fuel cells. But now, this lucky discovery opens the door to many new and exciting directions in radiation chemistry.”

Argonne is a U.S. Department of Energy laboratory managed by UChicago Argonne, LLC