Mapping the Interior of Nanocrystals in Depth 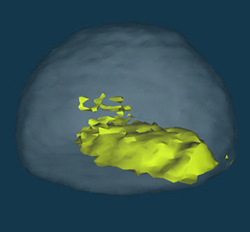 Complex, three-dimensional images of the interior of a nanocrystal have, for the first time, been obtained by researchers employing a new technique: inversion of coherent x-ray diffraction patterns. The structural information that can be revealed with this technique, first used at the XOR/UNI 34-ID-C beamline at the U.S. Department of Energy’s Advanced Photon Source, promises to have far-reaching implications not only for gathering nanoscale information about the properties of materials with a crystalline structure, but also for the goal of imaging single molecules using next-generation light sources based on free-electron lasers.

The distribution of intensity surrounding one of the Bragg peaks of a nanocrystal is known to contain the information about the shape of the crystal, as this group of researchers from the University of Illinois at Urbana-Champaign had previously shown. The latest pattern has broken symmetry that results in a complex function for the scattering density inside the nanocrystal. According to the data just published in issue 442 of Science magazine, the phase of this complex density is interpreted as due to contact strains between the crystal and its substrate. The researchers note that three-dimensional, nanometer-scale images of the interior of crystalline materials can be used to gather information on “all of the classic defects, the basic ingredients of materials science.”

This research was funded by the NSF Division of Materials Research and the EPSRC. The UNICAT facility at the APS and the APS itself are supported by the US Department of Energy, the former through the Frederick Seitz Materials Research Laboratory. Use of the Advanced Photon Source was supported by the U.S. Department of Energy, Office of Science, Office of Basic Energy Sciences, under Contract No. W-31-109-ENG-38.

Startling three-dimensional images of nanoparticles have been obtained with an X-ray microscope, showing crystal deformation in unprecedented detail. The trick is not to focus the X-rays, but to diffract them.

Imagine an imaging device with resolution more than 1,000 times better than an optical microscope and capable of seeing deep inside objects. Such is the promise of an X-ray microscope, which has been the dream of scientists since X-rays were discovered over a century ago. On page 63 of this issue 1, Ian Robinson and colleagues present a significant step towards realizing this dream, using the technique of coherent X-ray diffraction imaging. Their results demonstrate the power of X-ray microscopy to create three-dimensional images at the nanoscale, and indicate a clear path towards the ultimate X-ray microscope with atomic-scale resolution.