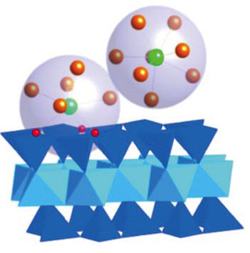 Scientists at the U.S. Department of Energy's Advanced Photon Source (APS) at Argonne National Laboratory have discovered surprising information about the way ions interact with mineral surfaces in water, opening the door to new knowledge on how contaminants travel in the environment. The insight, published in Physical Review Letters, may lead to a better understanding of the factors that determine water quality.

Water – colorless, odorless and tasteless – may seem simple, but its interactions with minerals can be difficult to study. Ions, which range from nutrients such as calcium, to contaminants such as lead, are present in natural waters, but their transport is often limited by adsorption to mineral surfaces. The more scientists can understand about the interaction of minerals with water and ions, the more effectively they can control water quality in our environment, and Argonne's research in this area is making a leading contribution to the field.

Contrary to generally held scientific assumptions, the simple textbook description of how ions adsorb to mineral-water interfaces has been shown to not be universally true.

"Ions are known to carry a hydration shell in water," said Argonne physicist Paul Fenter. "Previously, it was thought that ions either adsorb to a mineral surface with this shell intact as an outer-sphere ion, or remove part of this shell to directly bind to the mineral as an inner-sphere ion. We now know that this is not just a black and white difference, but have discovered new shades of gray by showing that outer-sphere and inner-sphere species of the same ion can co-exist."

This revelation was the outcome of a new element-specific method developed to understand the behavior of ions at the interface between minerals and liquids, like water.

According to Argonne chemist Changyong Park, "Conventional methods provided no direct sensitivity to observing this behavior. Outer-sphere species were almost invisible and extremely difficult to identify. There was just no way to see the co-existence of both species previously. "

The team made this discovery using BESSRC/XOR beamlines 12-BM-B and 11-ID-D at the APS. The team was able to take advantage of the technique's spectroscopic sensitivity to identify the way specific ions interact at mineral-water interfaces and to visualize the phenomena directly.

The findings built on earlier work on cation adsorption using traditional x-ray scattering techniques. The Argonne scientists, working together with researchers from the University of Illinois at Chicago Department of Earth and Environmental Sciences, previously discovered an anomaly in the way ions adsorb. The team collaborated again with the new element-specific technique which led to this new discovery, central to understanding the behavior of ions at solid-liquid interfaces.

Water dissolves more substances than any other liquid. This means that wherever water goes, either through the ground or through our bodies, it takes ions along with it. A general understanding of this behavior and the development of a new scientific method for studying this phenomenon may lead to better understanding of various other processes that take place at solid-liquid interfaces, including corrosion, erosion, catalysis and even the biological behavior of cell membranes. Contact: C. Park, cypark@anl.gov.

This work was supported by the Geosciences Research Program of the Office of Basic Energy Sciences, U.S. Department of Energy, through Contract No. W-31-109-ENG-38 to Argonne National Laboratory and DOE Grants No. FG02-03ER15381 and No. FG02-02ER15364 to the University of Illinois at Chicago. Use of the Advanced Photon Source was supported by the U. S. Department of Energy, Office of Science, Office of Basic Energy Sciences, under Contract No. W-31-109-ENG-38.

The nation's first national laboratory, Argonne National Laboratory conducts basic and applied scientific research across a wide spectrum of disciplines, ranging from high-energy physics to climatology and biotechnology. Since 1990, Argonne has worked with more than 600 companies and numerous federal agencies and other organizations to help advance America's scientific leadership and prepare the nation for the future. Argonne is managed by the University of Chicago for the U.S. Department of Energy's Office of Science