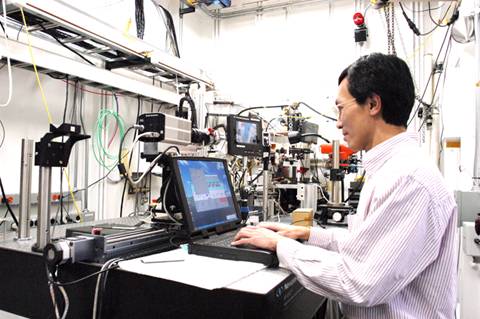 Researchers at the National Cancer Institute (NCI), part of the National Institutes of Health, using x-ray fluorescence spectroscopy at X-ray Operations and Research beamline 2-BM at the U.S. Department of Energy's Advanced Photon Source have found that zinc deficiency in humans is associated with an increased risk of developing esophageal squamous cell carcinoma, an often-fatal form of esophageal cancer that has about 7,000 cases a year. NCI researchers used a novel approach to measure the concentration of zinc and other elements directly in the esophageal tissue. Their results, appearing in the February 15, 2005, Journal of the National Cancer Institute* , showed an inverse relationship between tissue zinc concentration and subsequent risk of esophageal squamous cell carcinoma.

Dietary deficiency of zinc, an essential mineral, has been associated with esophageal cancer in rodents. So far, though, examining this association in humans has been hampered by the difficulty of measuring zinc levels in the body through traditional methods. "Measuring zinc levels in the blood is not very sensitive," noted lead author Christian Abnet, Ph.D., of NCI's Cancer Prevention Studies Branch. "Because zinc is maintained in a state of equilibrium, just like body temperature, the readings will tend to be similar. Calculating zinc from intake of meat and other dietary sources isn't very sensitive either since other compounds, like phytates in whole grains, will inhibit zinc absorption."

Abnet turned to a different technique: X-ray fluorescence spectroscopy, which involves bombarding a sample with high-intensity X-rays, causing the elements in the sample to fluoresce, or glow, with a characteristic energy signature. "This allowed us to measure element concentrations directly in the tissue of interest," said Abnet, "so it should be the best indicator of the effects of zinc or other metals."

Esophageal tissue samples were obtained from a population in Linzhou, China, that was followed from 1985 through 2001. People in this region are at high risk for squamous esophageal cancer and tend to consume little meat and a lot of whole grain, and therefore are more likely to be zinc deficient. An earlier publication estimated that residents of this region get only 62 to 72 percent of the U.S. dietary recommendations for zinc, whereas most Americans meet current dietary recommendation levels.

A subset of the population underwent endoscopy with biopsy in 1985, and the NCI team, with the aid of Barry Lai, Ph.D., at Argonne National Laboratories, Argonne, Ill., examined these specimens. They measured zinc, copper, iron, nickel and sulfur levels in samples from 60 subjects who developed esophageal squamous cell carcinoma during the 16 year follow-up and from 72 histology-matched subjects at the start of the study who did not develop the disease.

The average tissue zinc concentration was significantly lower in subjects who developed esophageal cancer than in control subjects (44 ng/cm2 compared to 57 ng/cm2). When the researchers ranked the study participants by quartiles based on zinc concentration, they found that those in the highest quartile had a 5-fold lower risk of developing esophageal cancer than those in the lowest quartile. Overall, 90 percent of subjects in the highest quartile were alive and cancer-free after 16 years, while only 65 percent of the subjects in the lowest quartile were alive and cancer-free. There were no consistent associations with cancer risk for any of the other elements studied.

These findings establish an initial connection between zinc and esophageal squamous cell carcinoma in humans, although further research is needed to ensure this association is more than a local phenomenon in an area of extreme zinc deficiency. However, Abnet believes the technique itself holds great promise for future element studies. "X-ray fluorescence spectroscopy has many advantages," said Abnet. "You can apply it to most elements and you only need a tiny tissue sample. Also, it doesn't damage the tissue, so you can make multiple measurements on one sample." Abnet also noted that they successfully measured samples collected and embedded in paraffin in 1985, demonstrating that other researchers could apply this technique to archived tissue samples.