A virtual workshop was held on March 2nd, 2021 to cover the basics of X-ray Fluorescence Microscopy (XFM) and discuss application examples from the biological, biomedical as well as environmental scientific areas.  The intent was to provide an overview of capabilities that are available to general users at Department of Energy synchrotron light sources, and how to access them. The workshop was aimed at new users potentially interested in making use of these resources, to provide them with an idea of what the technique could deliver for their research, and the work and knowledge base that would be required to make use of these instruments.  Capabilities at each of the synchrotrons were highlighted to facilitate broader use.  Up to 98 people at a time participated in the event.

Stephen Streiffer, APS director, opened the workshop with a welcome and introduction. He discussed briefly the evolution of XFM and X-ray techniques in general towards higher speeds and high spatial resolution. He also pointed to the development of the next generation of synchrotron light sources, nationally and internationally, and improvements factors of up to 500 to 1000 these can bring for XFM.

Stefan Vogt next gave a brief summary of the basics of XFM. He outlined the 5 DOE light sources, including general user access to these resources, introduced the synchrotron light source compared to a laboratory source, outlined X-ray fluorescence principles and technique limitations, and provided example instrumentation and results (2D and 3D).

Gayle Woloschak followed with an overview of XFM applications in the life sciences, with some focus on biomedical applications. She discussed single cell imaging with XFM, focusing on the application of nanoparticles for theranostics, and demonstrated the use of XFM in the context of other approaches such as immunohistochemistry. She then provided several examples of applications of XFM on the tissue level, ranging from investigation of effects of radiation mitigation treatments, to trace metals in neurodegenerative diseases such as Alzheimer’s, as well as in cancer. She finished highlighting studies using XFM to investigate potential chemotherapeutic approaches.

Si Chen provided an overview of the Bionanoprobe instrument, a cryogenic nanoprobe with resolutions down to 30 nm on biological systems, as an example of capabilities at the Advanced Photon Source. She showed examples of subcellular trace element analysis in bacteria as well as mammalian cells. She also discussed cryogenic fixation for optimized sample preservation. She then demonstrated capabilities of the instrument with examples of introduced nanoparticles in cells, metal homeostasis in algae, as well as studies of metal debris from implants. She finished summarizing the upgrades of the APS as well as the Bionanoprobe instrument.

Ryan Tappero gave an overview of x-ray microscopy capabilities deployed at the NSLS II for biological and environmental research, ranging from large field of view imaging of plant materials to 3D XFM to microfluidic devices for X-ray spectroscopy to cryogenic capabilities. He touched upon current and future developments at the NSLS II in particular with regards to cryogenic and confocal capabilities. He finished the presentation by showcasing XFM capabilities in imaging of plant-microbe interactions in the rhizosphere.

Martina Ralle provided the perspective of a user of numerous synchrotron facilities, and discussed her work on studying copper distribution in mammalian systems with XFM. She introduced copper homeostasis in mammals, and a mouse model for Wilson’s disease, a copper accumulation disease. She highlighted findings of copper storage vesicles in brain, as well as other tissues. She also discussed work complementing XFM contrast of natural trace metals with functionalized nanoparticles.

Sam Webb provided an overview of biological and environmental spectroscopic XFM capabilities at the SSRL, as well as their applications. Examples ranged from elemental changes in brain cells after a stroke, to associations of iron and uranium in an aquifer, to studying sulfur chemistry in several systems. He discussed several developments at SSRL, ranging from new axially symmetric optics, to cryogenic capabilities, to high energy resolution fluorescence detection (HERFD) to overcome some limitations of conventional x-ray spectroscopy as well as complementary tools such as infrared microscopy.

Richard Ortega brought an international user perspective, and discussed XFM applications to imaging toxic as well as essential metals in neurons. He provided examples that investigated neurotoxicity of uranium, as well as the role of manganese in familial Parkinson’s disease. He highlighted the potential of multimodal experiments by combining optical stimulated-emission-depletion super-resolution microscopy (STED) with XFM, and applying it to studies of Cu and Zn in dendritic spines.

Sirine Fakra gave an overview of XFM capabilities at the ALS, as well as future perspectives. She summarized the number of different sample environments available at ALS XFM 10.3.2, including capabilities for air-sensitive and cryogenic samples as well as XFM imaging of low Z elements (in particular P). She discussed a software package to rapidly classify XANES data according to metal (loid) valence states, and showed two application examples investigating intracellular mineralization of arsenic and barium by filamentous sponge-associated bacteria as well as the role endophytes can play in nutrient acquisition in poplar trees. She finished by briefly pointing to the future of XFM at the ALS with the development of a Tender Nanoprobe.

Ingrid Pickering gave the last presentation of the workshop, highlighting experiments that investigated the interplay of toxic elements in vertebrates. She provided an overview of a number of toxic elements and their relative toxicity, emphasizing the severe impact of the toxicity of mercury.  She focused the presentation on the interplay between mercury and selenium, as there have been relevant societal questions around fish consumption and whether mercury toxicity could be mitigated with selenium consumption. She demonstrated how XFM is an excellent tool to help address such scientific questions.

At the end of the workshop, participants discussed various points the workshop touched upon. The complementarity of the various beamlines and light source capabilities was pointed out, and that better coordination, both nationally and internationally could make an impact, in addition to within facilities. The importance of sample preparation was brought up, and approaches to sharing of protocols discussed.  There was significant interest in developing an ‘XFM’ atlas of elemental maps for biological systems, although it would require significant resources, in particular with regards to sample preparation and beamtime. Steps towards more broadly developing the community were discussed, where perhaps providing information (for example via a web page) might be an easy first step, pointing to protocols, reference publications, list to beamlines, data analysis approaches, etc 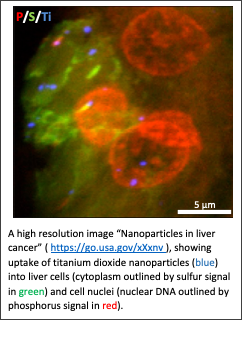 To report an event that is not listed, please contact webmaster, for additional synchrotron-related conferences, check lightsources.org.